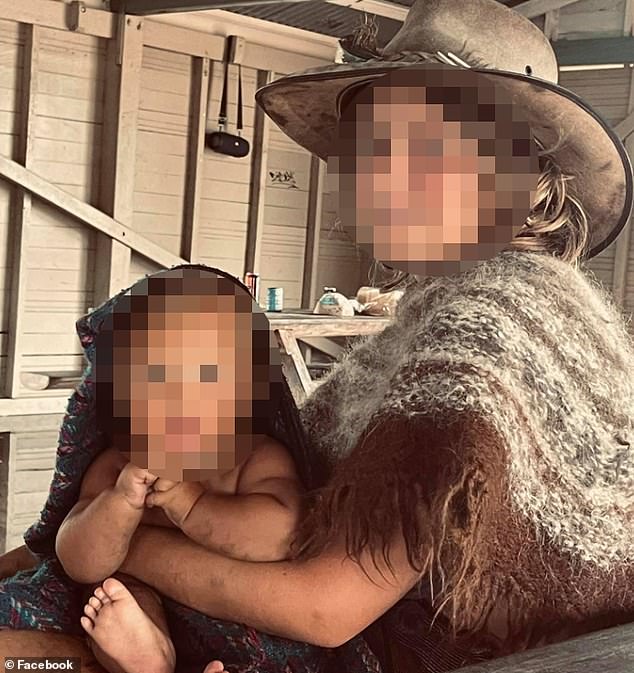 A young couple are preparing for the return of their baby one month after he was removed by authorities and placed in foster care amid concerns for his welfare.

The 17-year-old mother and her 18-year-old boyfriend appeared in family court on Monday where they fought to regain custody of their eight-month-old son.

Distressing footage emerged of the the baby being ripped from his mother’s arms as she breastfed him in a car park in Brunswick Heads, near Byron Bay on the NSW North Coast, on January 15th.

Family and Community Services said the family’s lifestyle choices – including living outdoors and their strict anti-vaccination stance – was putting the little boy at risk.

The baby’s mother was just 15 when she fell pregnant and after going into labour on the beach, presented at her local hospital to give birth. Pictured: Mother and son together

Friends of the young couple have been outspoken in their defense of their parenting techniques, pleading with the government to reunite mother and baby

But Daily Mail Australia understands the couple, who cannot be named for legal reasons, have agreed to move into a home in the region in an attempt to have their baby returned to them.

The community has rallied to help equip the young couple with supplies, including offering cots, play pens and clothing ahead of Monday’s court hearing.

The couple are overwhelmed with the outpouring of love and support they’ve received since footage of the baby’s removal went viral, a friend explained.

On Sunday, a friend of the couple revealed they’d secured a ‘great legal team’ and were likely to regain custody of the little boy.

Supporters gathered out the front of the court house on Monday, chanting songs and performing in a ‘ceremony’ to express their hope that the family would be reunited.

The teenage mother had agreed to move into a property in the Byron Bay region, despite her own desire to live off the land in a commune, to assure authorities that her son would be well looked after and safe.

Supporters of the young couple have been vocal outside of court, urging the government to reunite them with their baby

Authorities previously expressed concerns that the little boy was at risk living in the commune and exposed to Australia’s harsh elements all day long.

The potential reunion comes four weeks after distressing footage emerged of the Department of Family and Community Services forcefully removing the baby while his mother was topless and breastfeeding.

‘This is not right, this is my baby. Please don’t take him,’ she repeatedly says as she pleads with authorities not to take her boy.

In the video, the young mother argues with several officers and support workers from family and community services, who arrived in her commune in the Byron Shire to remove the little boy.

The baby’s father expressed concerns about the way he is being supported in the care of authorities. He said he was particularly worried the chemicals in which his baby is being bathed in and the thought of him sleeping alone

While the lifestyle is unorthodox, those close to the situation insist the woman (pictured together) is a ‘great mother… doing what she thinks is best for her baby’

While their ‘outdoor lifestyle’ is unorthodox, those close to the situation insist the woman is a ‘great mother… doing what she thinks is best for her baby’

While their ‘outdoor lifestyle’ is unorthodox, those close to the situation insist the woman is a ‘great mother… doing what she thinks is best for her baby’.

The officers initially try to reason with her and convince her to hand her baby over, before eventually trying to peel her off him.

They repeatedly tell her she is ‘hurting the baby’ as she tries to keep a hold of him.

One of the support workers at one stage hears the baby cry and tells the woman that there is no other outcome than him leaving her care.

‘He’s crying… We’ll sort stuff out but he’s going to have to go. This is not going to end any differently at the moment.’

The woman then says she has ‘concerns for the safety and well being of the baby’.

The boy’s father (pictured with the baby) is concerned about how he is being treated in foster care. The young couple, who are 17 and 18, were resolved to raise him outdoors and ‘on the land’

The officers initially try to reason with her and convince her to hand her baby over, before eventually trying to peel her off him

The young mother was later offered one-on-one time with her baby, but turned it down because she was worried it would only cause further abandonment issues both for her and the boy in the long run.

On the advice of friends and family, she changed her tune and started seeing the little boy recently as the reunification process dragged on ‘longer than expected’.

The 17-year-old has seen her son ‘four or five times for a few hours each visit’ and was able to breastfeed on each occasion, she revealed.

She told a friend, who has become somewhat of a mouthpiece for the family in the community and on social media, each visit was ‘very beautiful’ and gave her an opportunity to further bond with her son.

The young couple will work closely with authorities to ensure they are able to cope and feel supported.

Family friends have bizarrely questioned whether the state had any right to take the baby from his parents, given he was allegedly never registered and does not have a birth certificate.

‘We all became property of the Commonwealth [when we got birth certificates] and that means we have to abide by the Queen’s laws… I believe there is some kind of loophole here,’ the friend explained.

Australian parents must register a child within 60 days or eight weeks of birth.

Without registration papers and a birth certificate, a child cannot travel overseas, enrol in school or access Medicare.

Daily Mail Australia understands the Department of Family and Community Services has been involved in the infant’s life since he was born.

His mother was 15 or 16 when she fell pregnant and after going into labour on the beach and presented at her local hospital to give birth.

Her own mother wasn’t at the hospital and nurses quickly established that she and her young boyfriend did not have a fixed address.

Family services were called and explained that they weren’t allowed to leave hospital with their baby unless they had an address to return to – so they provided the teen’s older sister’s address as a base.

The couple lived there for a short time but eventually decided to return to their outdoor lifestyle and raise their baby within the bush community.

Authorities then kept a close eye on the couple before eventually swooping in on January 15 and removing the baby.