Teenage footy star headed to the AFL will never walk again after slipping from a popular jump spot and hitting rocks, breaking his back, scalp, collarbones, two ribs and spinal cord 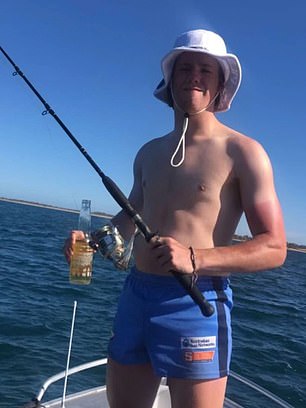 Pictured: Jake Bilsborow before the accident

A teenage football star months from cracking the AFL will never walk again after he plunged six metres into waterhole and severed his spinal cord.

Jake Bilsborow knocked off early on Wednesday and headed to the popular swimming in Bridgewater in Adelaide Hills to cool off with some friends.

The 18-year-old took a running jump to launch himself into the water, but slipped on some wet leaves and plummeted into the rocks below.

He was lucky to be alive after breaking his back, scalp, collar bones, two ribs, and his spinal cord, but is struggling with the idea that he will never use his legs again.

‘He kept saying, “Dad, you just got to help me get some crutches and get out of here and make sure I go”,’ he told The Advertiser.

‘It hasn’t really just hasn’t sunk in yet.’ 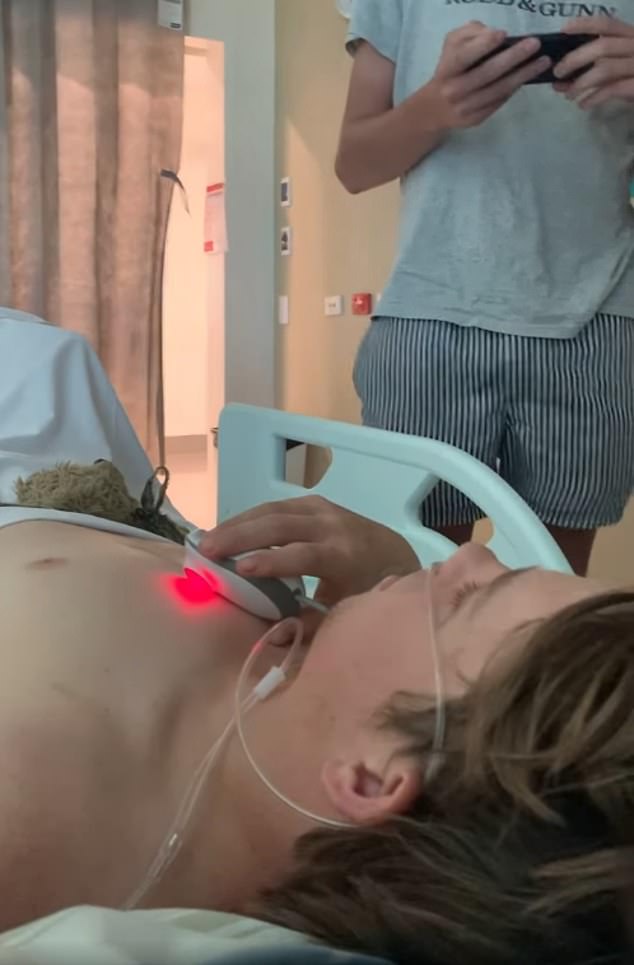 Pictured: Jake Bilsborow in hospital before watching a message from his idol Tom Atkins

Last year, the talented sportsman nominated himself in the AFL draft after winning two medals in the Hills Football League.

He was also a gifted cricketer and played his first game with younger brothers Max, 16, and Gus, 15, the week before the accident.

‘That game gave me a lot of joy but those are things I get upset about now,’ Mr Bilsborow said.

‘But then… my youngest son said to me: “He’ll still be a Paralympian,” and that lifted my spirits a bit.’ 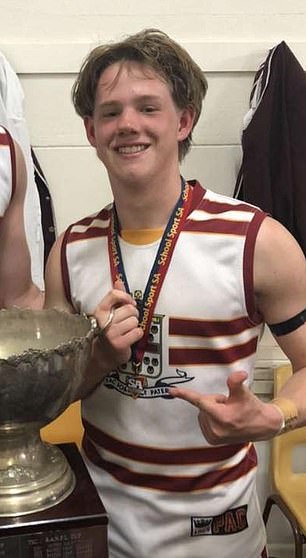 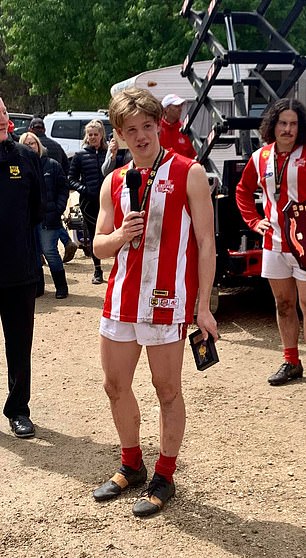 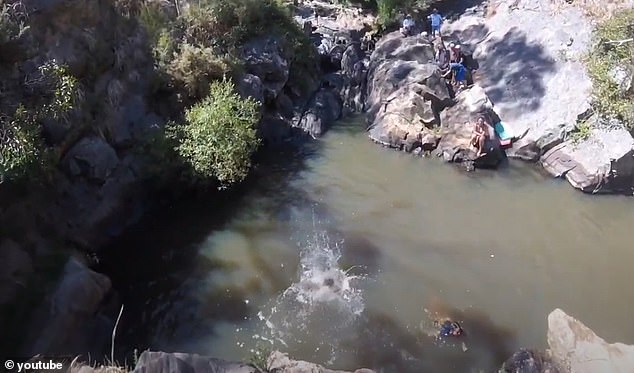 Pictured: The waterhole at Bridgewater in Adelaide Hills where Jake plunged six metres

On Sunday, the teen received a special message from his hospital bed by his favourite Geelong Cats player Tom Atkins.

In a video message, the midfielder offered to hand over his phone number so Jake could give him a call whenever he’s ‘feeling a bit down’.

‘I’ll pass on my number as well if you wanted to tee up a phone call.

‘It doesn’t doesn’t have to be a one-off thing, just whenever you might be feeling a bit down you can give me a buzz and we can have a chat and see how you’re going.’ 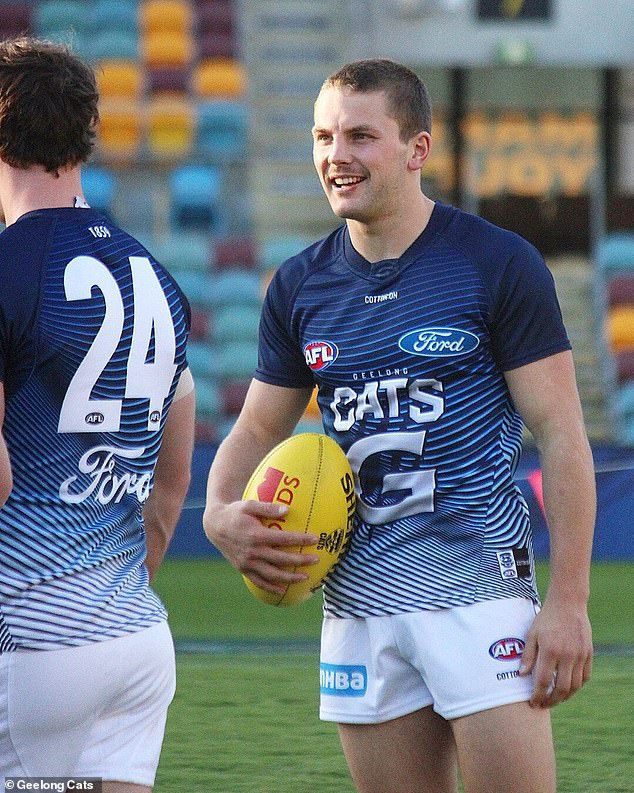 On Sunday, the teen received a special message from his hospital bed by his favourite Geelong Cats player Tom Atkins (pictured) 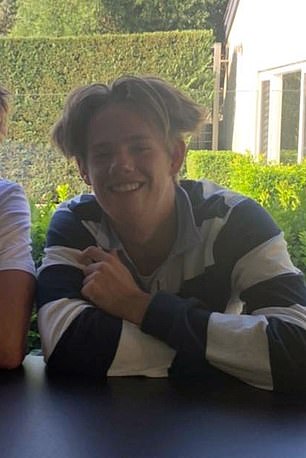 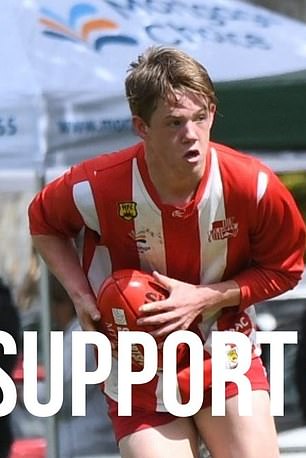 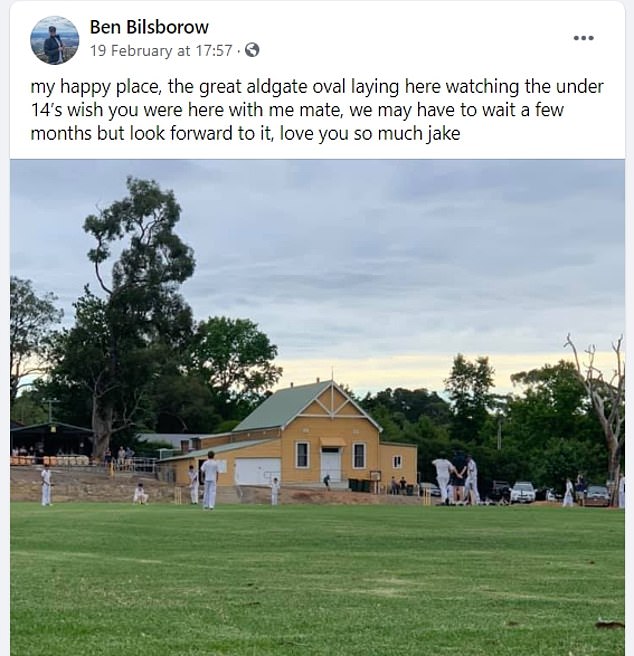 On Saturday, Mr Bilsborow wrote a heartbreaking post on Facebook, alongside a a photo of his ‘happy place’ at a local cricket pitch (pictured)

Geelong Football club have also offered to send the teenager a Cats jumper signed by all players, including Atkins.

A friend of the family made a GoFundMe page to help with medical costs, including making their home safe for a wheelchair and buying a car with hand controls.

On Saturday, Mr Bilsborow wrote a heartbreaking post on Facebook, alongside a a photo of his ‘happy place’ at a local cricket pitch.

‘The great Aldgate Oval laying here watching the under 14’s,’ he wrote.

‘Wish you were here with me mate, we may have to wait a few months but look forward to it, love you so much Jake.’

The biggest political scandal in Australia … the rape of an employee inside the parliament building and the harassment of 3 others!

Bulls in control ahead of the UK employment data

Bulls in control ahead of the UK employment data