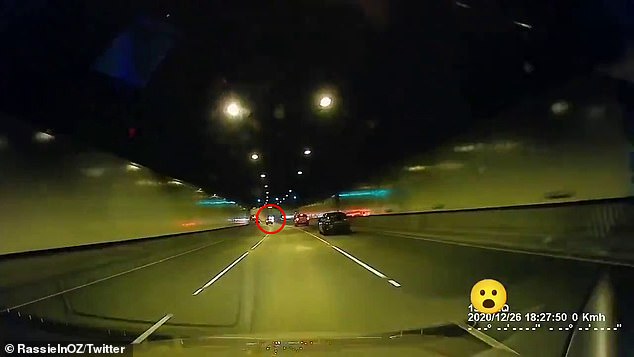 This is the moment an allegedly stolen car came speeding the wrong way through a busy tunnel, narrowly avoid a serious accident.

The ute eventually lost control and smashed into several cars outside Southern Cross Railway Station about 8pm on Saturday.

Police helicopters first spotted the car driving ‘erratically’ in the northwest suburb of Essendon about 5pm.

‘The police helicopter monitored the vehicle for about three hours and guided a coordinated police ground response as it travelled across much of the metropolitan Melbourne area,’ police said.

‘On a number of occasions, the vehicle allegedly drove into oncoming traffic on several freeways at high speeds.’

Responding officers quickly arrested the driver at the scene of the crash, but the passenger allegedly fled into the train station.

They eventually found him hiding in a train carriage and he was taken into custody.

Police charged the teens from Reservoir in Melbourne’s north with a litany of traffic offences including theft of a motor vehicle, reckless conduct endangering life, driving in a dangerous manner.

Pictured: Footage shows the vehicle swerving to miss oncoming traffic on the EastLink tunnel in Melbourne’s CBD just before 6.30pm on Boxing Day

The pair were remanded in custody and will face a Children’s Court at a later date.

Despite the multiple traffic collisions, police said there were no reports of injuries.

Darebin crime investigation unit detectives are now calling on anyone who witnesses the incident or may have dashcam footage to contact police.

‘More than 60 drivers reported seeing the speeding vehicle to police and we urge those people to come forward,’ police said.

Ronaldo with "Caftan" and Georgina as "Chaban" ... an uncommon appearance of the duo in Dubai (photos)