This is the terrifying moment a van driver sent sparks showering other motorists on a dual carriageway when the wheel came flying off his vehicle as he overtook in the outside lane.

The treacherous incident was caught on dashcam by a HVG driver on the A19 outside Hartlepool in Durham, last month.

The driver who captured the incident, Steve Day, claims the motorist was ‘lucky’ not to cause a serious accident after it appeared the vehicle’s front passenger wheel broke free.

Steve had only just re-joined the road after using the services and was travelling along the A19 around 4pm on November 26.

The 60-year-old HGV driver’s dashcam captured footage of a white van overtaking him at around 60mph.

The video shows the van indicating to move back into the inside lane, when the van’s rear passenger tyre spontaneously comes loose and goes flying off in front of Steve’s lorry.

As the vehicle drops into the tarmac, bright orange sparks fly into the air as the van driver somehow manages to steer himself to the side of the road before screeching to a halt. 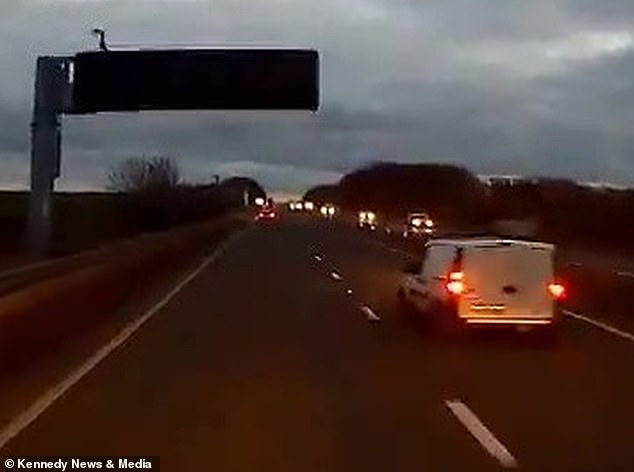 This is the terrifying moment a van driver’s wheel fell off his vehicle in shower of bright orange sparks as he overtook a HGV on the A19 outside Hartlepool in Durham, last month

Steve putting his hazard lights on and slowed down to keep a safe distance from the van while ensuring no other cars pulled in front of him.

Steve said: ‘I couldn’t believe it when the wheel went flying. It’s certainly not something you see every day.

‘I had no idea where it was going to end up, I was worried it might rebound and hit my lorry.

‘The van driver controlled it really well, especially only being on three wheels. He managed to get himself to the side of the road and the tyre had come to rest not far behind him. 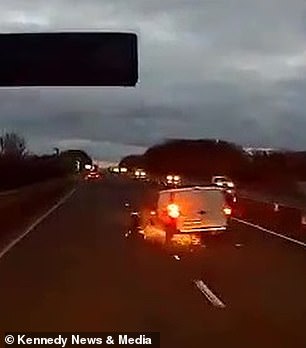 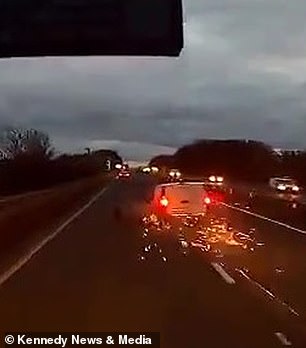 ‘It was very lucky it was just before rush hour as if there had been more cars on the road it could have been a lot worse for everyone involved.

‘It worked out quite well for him as he managed to safely get off the dual carriageway.’

After Steve uploaded the footage to social media, some people said what had happened was their ‘worst fear’.

Another person commented: ‘How many car owners will now go and check their wheel nuts are properly tightened, after watching this?’