Terrorism supporter, 25, who spent 18 months in jail for associating with extremist group IS is back behind bars just two weeks after his release for looking at beheadings and torture material online

A man from Sydney who was previously convicted as a supporter of Islamic State has been thrown back in jail after allegedly accessing material about beheadings and torture.

Radwan Dakkak, 25, was arrested at his Denistone home on Saturday morning by Australian Federal Police for allegedly breaching a court order restricting his activities. 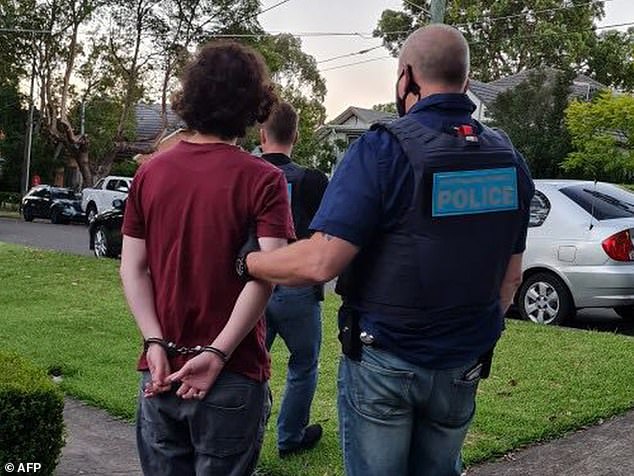 Radwan Dakkak, 25, was arrested at his Denistone home on Saturday morning by Australian Federal Police

‘(Dakkak) has an extremist ideology aligned with the ISIS (Islamic State) terror network,’ he said.

Dakkak was released from prison on January 1 after serving an 18-month sentence for two counts of associating with a terrorist organisation.

He pleaded guilty to both counts.

In December, Federal Court Justice David Yates banned Dakkak from using Facebook, WhatsApp, Instagram and other messaging apps and social media, because of his radicalisation and lack of remorse.

Other elements of the control order include a curfew, reporting requirements, and a prohibition on paid employment without informing the AFP first.

‘Prior to his incarceration, Dakkak associated with a number of persons who supported the ideology and activities of Islamic State, both in person, on the telephone and online through social networking platforms,’ an annexure to Justice Yates’s reasons stated.

‘His network is wide-ranging, and interactions include discussions about extremist ideology and religiously motivated violence, including jihad.’

As a result of the alleged breaches, Dakkak was charged on Saturday with three counts of contravening a control order.

The offence carries a maximum penalty of five years’ imprisonment.

Mr Nicholson said officers in his counter-terrorism unit were able to act quickly on the alleged breaches because of their ‘continued monitoring’ of Dakkak’s control order.

‘That’s what we do to maintain community safety,’ he said.

‘No specific or impending threat to the community has been identified in relation to today’s activity or this investigation.’