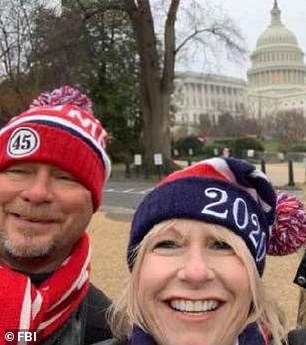 Mark and Jalise Middleton were arrested on Wednesday in north Texas

A married couple from Texas have been charged with assaulting U.S. Capitol police officers, after the FBI said they posted boastful videos about their role in the January 6 riot to Facebook, and then quickly deleted them in an attempt to cover their tracks.

Mark and Jalise Middleton were arrested on Wednesday at their home in Forestburg, a small community about 80 miles northwest of Dallas, after the FBI said they were busted by police bodycam videos.

Mark Middleton, 51, works in sales for internet services company Nortex Communications, and Jalise Middleton, 50, is an account executive for Angels Care Home Health, according to their LinkedIn profiles.

FBI investigators say that police bodycam shows the Middletons pushing, grabbing and striking Capitol cops as they joined a crowd of Donald Trump‘s loyalists in attempting to push through barricades outside the U.S. Capitol. 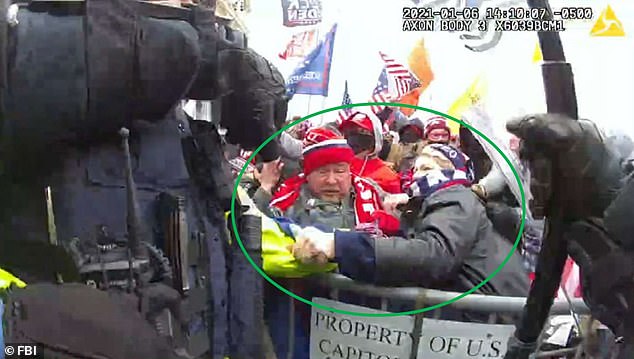 FBI investigators say that police bodycam shows the Middletons pushing, grabbing and striking Capitol cops as they joined a crowd of Donald Trump’s loyalists on January 6 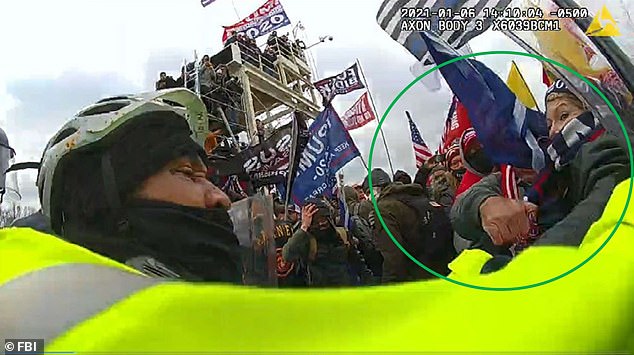 In a Facebook video that he deleted two days later, Mark Middleton said that he and his wife had not entered the Capitol, but appeared to admit taking part in the riot.

‘We are on the front lines. We helped push down the barriers. Jalise and I got pepper sprayed, clubbed, and tear gassed. We had to retreat, but more patriots pushed forward, and they’re taking back our house,’ he said in the video, according to the FBI.

‘They’ve got the giant flag up on the upper terrace up there. No more fooling around! Jalise and I gotta go back to the hotel and try to recoup and change, get dry clothes on. Make America great again! Freedom!’ continued Mark Middleton.

The following day, Mark Middleton posted Facebook comments attempting to defend himself and his wife, writing: ‘Do not believe the news media, we’re not rioters or mobs. There are close to a million people here today, if not MORE.’

‘If we intended to start a riot, there wouldn’t be a building left, just saying. Yet, not one building is burned, not one store looted, not one police car set on fire!’ he continued.

The FBI said that Jalise Middleton also made incriminating comments on Facebook during and after the riot. 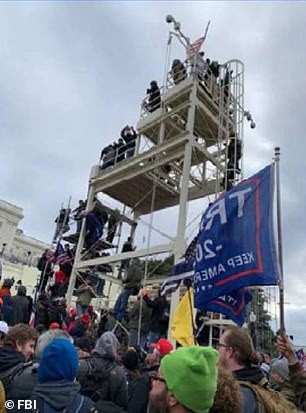 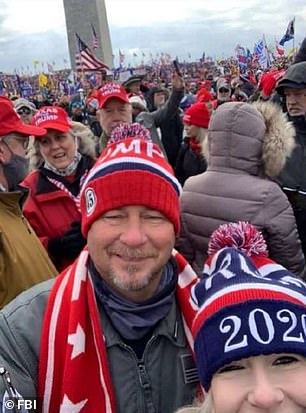 A tipster whose daughter is friends with Jalise Middleton alerted the FBI to their deleted Facebook photos and video from the riot, which the bureau recovered (left and right)

‘We fought the cops to get in the Capital and got pepper sprayed and beat but by gosh the patriots got in!’ she wrote in one post.

‘Me and my husband were on the front lines pushing into the capital and got past the fencing but then we got beat by a cop and pepper sprayed so we had to retreat but you see all our fellow patriots got in,’ another comment read.

On January 21, a tipster whose daughter is friends with Jalise Middleton contacted the FBI to share her suspicions that the Middletons had taken part in the riots, saying the couple had posted and then deleted the Facebook videos.

The FBI was able to identify the Middletons based on the distinctive outfits they wore on January 6, and found police bodycam videos that showed them fighting with Capitol cops as part of a crowd attempting to storm past barricades.

The assault took place near the bike rack barricade line at the base of the West Front of the Capitol building, several yards from the media tower, the FBI said.

According to the FBI, the bodycam video shows Mark Middleton pushing against the police line and shouting ‘f*** you’ when ordered to move back. 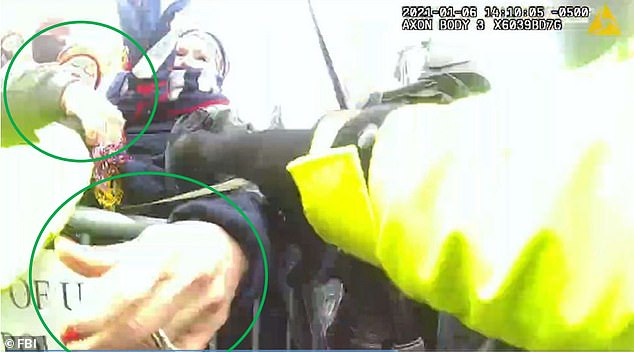 Jalise Middleton was caught on camera grabbing and repeatedly striking an officer with her hand, the FBI said

‘We fought the cops to get in the Capital and got pepper sprayed and beat but by gosh the patriots got in!’ Jalise Middleton wrote on Facebook 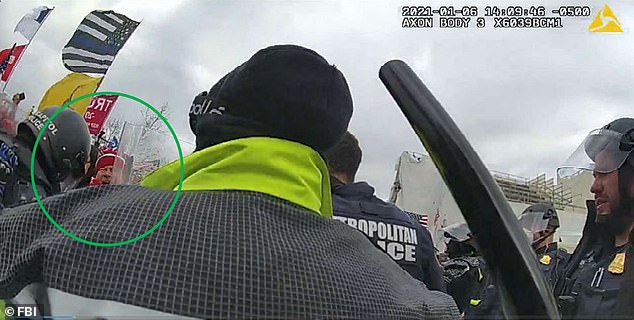 According to the FBI, the bodycam video shows Mark Middleton pushing against the police line and shouting ‘f*** you’ when ordered to move back

Jalise Middleton was also caught on camera grabbing and repeatedly striking an officer with her hand, the FBI said.

Mark and Jalise Middleton are being held in federal custody and could not be reached by DailyMail.com on Saturday. It was unclear whether they had an attorney to speak on their behalf.

Over 400 individuals have been charged in connection with the Capitol attack, and federal prosecutors said on Thursday that they expect to bring charges against at least 100 other people.