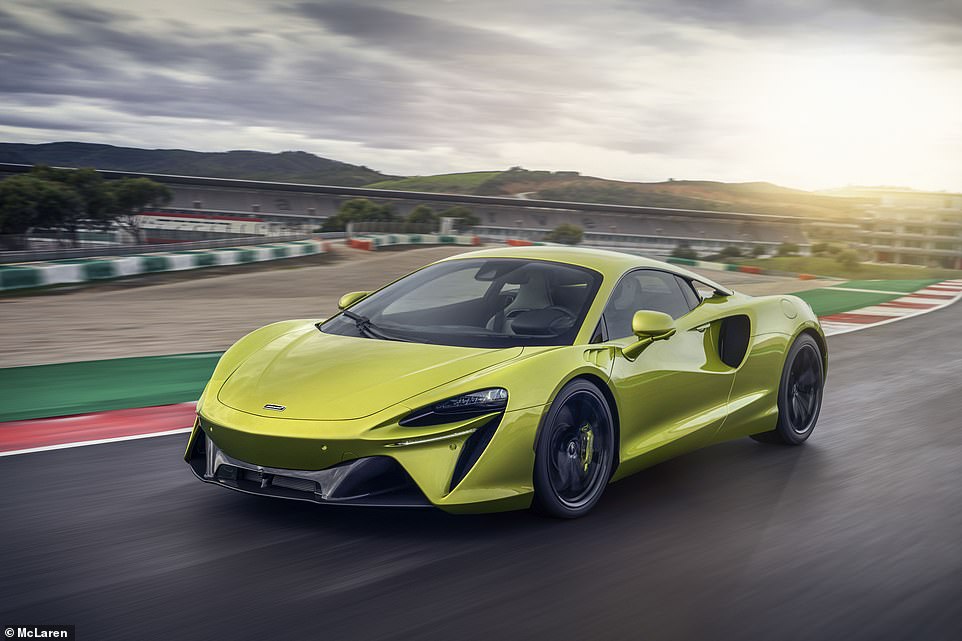 Priced from £185,500, the two-seater super-lightweight plug-in hybrid will sprint from rest to 60mph in three seconds – and possibly fractionally less – subject to official validation.

McLaren hailed it as the start of ‘a new chapter for the pioneering supercar company and a new era in supercar technology and performance’.

The launch of a major British-built supercar so soon after Brexit is also major vote of confidence in the UK.

McLaren’s planet-preserving supercar: This is the new Artura, the British firm’s latest model that’s super quick but also very green (and not just the paint)

The Artura is the first supercar the brand has released with a hybrid powertrain, with the only previous petrol-electric combo being the plug-in hybrid P1 hypercar and Speedtail – both part of the firm’s Ultimate series and produced only in limited numbers.

Engineered for road and track, the new model promises a blend of ‘thrilling performance, driving dynamics and engagement’ with some ‘electric driving capability’.

Manufactured at McLaren’s boutique factory in Woking, Surrey, the new mid-engined Artura is the first model to be built on the firm’s new lightweight carbon architecture created in-house at the company’s new McLaren Composites Technology Centre near Sheffield.

The new Artura, with a tight ‘shrink-wrapped’ appearance, will be gunning for rival supercars including the Lamborghini Huracan, Maserati MC20 and Ferrari F8 Tributo.

It is powered by a 680 horsepower petrol-electric hybrid powertrain – combining a 585 horsepower 3.0-litre twin-turbo-charged V6 engine with a 95 horsepower electric motor and linked to an 8-speed SSG transmission.

Reversing is via the electric motor.

There are four driving modes: Electric, Comfort, Sport and Track.

Top speed is electronically limited to 205mph and it will achieve up to 81mph in electric power only.

Built at McLaren’s boutique factory in Woking, Surrey, the new mid-engined Artura is the first model use the firm’s new lightweight carbon architecture

The McLaren Artura generates a maximum power output of 680 horsepower. Some 585 horsepower is produced by the 3.0-litre twin-turbo-charged V6 engine and there’s also a 95 horsepower electric motor

Top speed is electronically limited to 205mph and it will also achieve up to 81mph in electric-only mode. It can travel in the latter mode for up to 19 miles before the petrol engine kicks into action

The Artura’s useable battery capacity of 7.4kWh gives it an electric only range of 19 miles – enough to cover 83 per cent of an average UK daily commute (outside of lockdown) of 23 miles.

Battery charging time is 2.5 hours to reach 80 per cent capacity. But the 72-litre petrol tank means a much longer range.

As a hybrid, it also generates and harvests extra electric power from braking and cruising en route.

If you’re looking for lightning fast acceleration, look no further. It can go from 0-to-60mph in just three seconds, and possibly fractionally less as the predicted 0-to-62mph time is the same

Incredibly, the new McLaren supercar can complete a quarter-mile sprint in just 10.7 seconds

The battery in this plug-in hybrid model can be charged to 80% capacity in 2.5 hours, though there’s no range anxiety with a 72-litre fuel tank

McLaren say the new Artura is ‘the most fuel efficient McLaren ever produced’ offering fuel economy in excess of 50mpg and, for a supercar, incredibly low CO2 emissions of just 129g/km.

Lightning-fast acceleration and speed requires equally powerful braking performance and the Artura has this with its carbon ceramic brake discs (390mm front, 380mm rear) with forged aluminium calipers, which will bring the car to a stop from 124mph in just 126 metres and from 62mph in 31 metres.

For a bit of leisurely cruising there’s also 160 litres of luggage capacity.

With the two swing-up doors back in place, the all-new interior has all key controls accessible from the steering wheel.

It’s only a supercar if it has a funky door-opening system. The Artura has a pair of swing-up dihedral doors that look fantastic

There are four driving modes: Electric, Comfort, Sport and Track, which is specifically for use on circuits

A new eight-inch high definition touchscreen allows the driver to configure assistance systems and to ‘mirror’ their smartphone. Software upgrades for the car are possible over the air

A new eight-inch high definition touchscreen allows the driver to configure assistance systems and to ‘mirror’ their smartphone. Software upgrades for the car are possible over the air.

Thanks to a lightweight carbon-fibre and aluminium body it weighs just 1,498kg at the kerbside, with a dry weight of 1,395kg, giving a class-leading power-to-weight ratio of 488 horsepower per tonne.

The total weight of hybrid components is just 130kg, which includes an 88kg battery pack and 15.4kg electric motor.

Thanks to a lightweight carbon-fibre and aluminium body it weighs just 1,498kg at the kerbside – that’s the same as a compact petrol-engined hatchback

The Artura also marks the debut of a new Clubsport seat for added cossetting comfort for even the tallest of drivers. McLaren said it ‘uniquely combines the range of motion expected of a moveable backrest with the light weight and support of a bucket seat.’

It explained: ‘The whole seat pivots as one through an elliptical arc when adjusted, combining under-thigh support, seat height and backrest in one movement.’

It promises to allow a driver measuring 6ft 4in (193cm) ‘to stretch out with generous knee- and leg-room, even with the backrest significantly reclined.’ Shoulder room is said to be ‘equally capacious.’

Prices start from £185,500 and McLaren says it will build as many as it can sell – far from the limited run of plug-in hybrids it has so far produced

Sadly the Artura name itself has no link to King Arthur or Athurian legend, but is a broad composite construct derived from Art and Future, said McLaren.

The firm said: ‘McLaren’s first series-production High-Performance Hybrid supercar focuses more than half a century of the company’s racing and road-car experience and expertise into a next-generation supercar that blends ground-breaking technology with McLaren’s dedication to pure driver engagement.’

McLaren Automotive chief executive Mike Flewitt said: ‘Every drop of McLaren’s experience and expertise has been poured into the Artura.

‘Our all-new, High-Performance Hybrid delivers all of the performance, driver engagement and dynamic excellence for which McLaren is renowned, with the additional benefit of EV driving capability.

Mr Flewitt added: ‘The introduction of the Artura is a landmark moment – for McLaren, for our customers who will appreciate and enjoy this car on every emotional and rational level, and for the supercar world.’

McLaren Artura: Will it fit in my garage?

Cities have permanently lost 400,000 jobs during COVID pandemic as many shift to suburbs. Will they come back?

Cities have permanently lost 400,000 jobs during COVID pandemic as many shift to suburbs. Will they come back?