The arrangement of the Saudi League .. Hegazy leads Al-Ittihad to the top, Al-Hilal and Al-Nasr in the Golden Square

Egyptian international defender Ahmed Hegazy led his team, Al-Ittihad, to the top of the Saudi League standings, with 16 points, two points ahead of Damak, the runner-up, after he scored a goal in the Tigers’ victory over its guest Al-Ahly, in the Jeddah derby, in the match that brought the two teams together at “Prince Abdullah Stadium.” Al-Faisal, as part of the seventh round of the Prince Mohammed bin Salman Cup “Saudi Professional League” for the current season.

Al-Ittihad is at the top of the Saudi League standings, with 16 points, two points ahead of Damak, the runner-up, while Al-Ahly comes in thirteenth place with 5 points.. 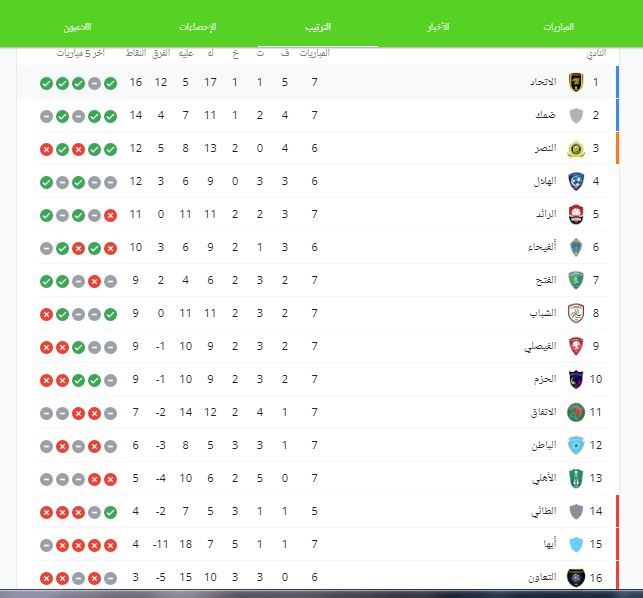 The matches of the second day of the seventh round of the Prince Mohammed bin Salman Professionals Cup ended, which witnessed a special excitement between the teams.

After the match, Al-Ittihad returned to the high table of the Prince Mohammed bin Salman Professional League to score 16 points.

In second place, Damak Club came with 14 points, while Al-Nasr Club came in third place with the same balance of 12 points, tied with Al-Hilal, which ranked fourth with the same score..

On the other hand, Al-Ahly Club ranked thirteenth with 5 points, behind Al-Batin, one point behind.

While Al-Shabab climbed to eighth place in the league standings with 9 points, Al-Shabab is equal with Al-Fateh and Al-Hazm in addition to Al-Faisaly on the same league table, while Al-Fayhaa club remained in sixth place with 10 points..

Today, Saturday, the matches of the seventh round of the Prince Mohammed bin Salman Professionals Cup will conclude with the confrontation of cooperation with his counterpart Al-Taie.

So far, 7 of the 8 matches in the tour have been played and concludes today before the tour ends and players exit to join the national teams during the international break..

Al-Taawon Club is at the bottom of the Saudi League table with 3 points, while Al-Taei is in the 14th place with 4 points.