Mystery surrounds the future of the Egyptian international, Mohamed Salah, with his club, Liverpool, in recent times, as a special message published on Instagram has sparked controversy again regarding the future of the pharaoh with the Reds, and Salah’s contract with Liverpool expires in the summer of 2023.

And the British newspaper, “Mirror”, revealed, earlier, that the player asked for 500,000 pounds per week in exchange for agreeing to the renewal, which was denied by the “Liverpool Echo” newspaper, and Liverpool is trying to find a solution that guarantees Salah’s survival and makes him the highest-paid player, but Without compromising the wage structure in a way that divides the locker room.

Croatian Dejan Lovren, the current Russian player of Zenit Saint Petersburg, revealed the content of a message between him and the Egyptian Mohamed Salah via the “WhatsApp” application, during which Lovren congratulated his friend and former colleague Salah for reaching the 100th goal with Liverpool, before Salah followed with a picture in which he took off the team shirt.. 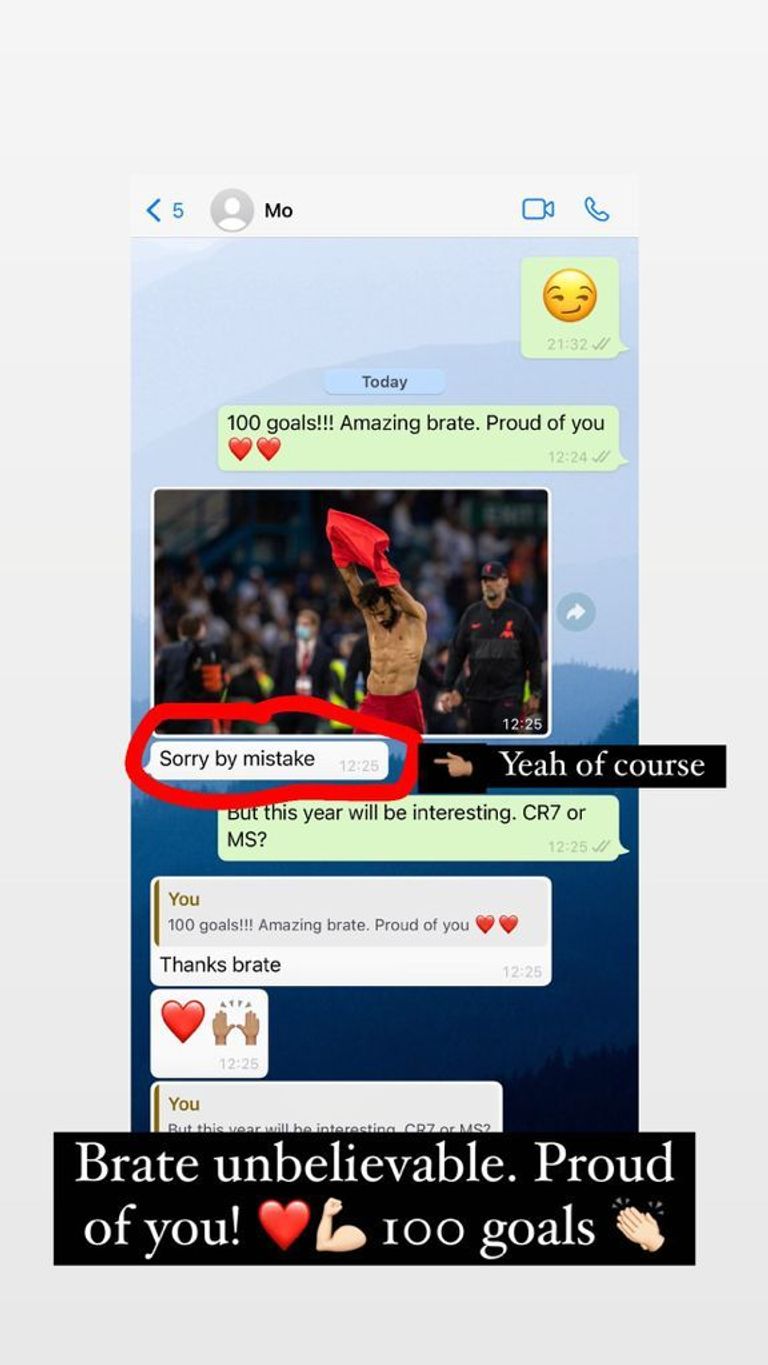 But Mohamed Salah commented on the photo, saying, “I apologize, I sent it by mistake,” to Lovren’s response, “Yes, of course“.

Salah and Lovren collaborated in Liverpool between 2017 and 2020, and their relations were known to be strong, which prompted the media to search for news of the Egyptian pharaoh from his Croatian friend..

Some interpreted the publication of the text of the conversation and Lovren’s comment on it with Salah’s desire to send a message to his club, reminding him of his intention to leave despite the date he made, if his requests were not met..

For his part, the Irish former Chelsea striker Tony Caskinro explained that Salah might have wanted to send a message by taking off his shirt, saying: “Some players when they take off their shirts, it is in order to send a message.”“.

Salah used to send vague messages to the management of his club since his move to him in the summer of 2017, whether by removing the name of the club from his account on the social networking site Twitter, or through the account of his agent and lawyer, Rami Abbas..

Egyptian star Mohamed Salah, Liverpool player, continued to be the top scorer in the English Premier League, after Sunday’s matches, which were held in the sixth round of the competition, where Arsenal beat Tottenham in the derby 3-1, while Southampton fell to Wolverhampton with a goal. free of charge.

Mohamed Salah topped the list of top scorers in the English Premier League in the current season 2021-2022, with 5 goals, equally with the duo Jimmy Vardy, Leicester City star, after scoring a double against Burnley, and West Ham United striker Michel Antonio, by scoring a goal against Leeds United.

Mohamed Salah scored a goal with Liverpool against Brentford, in the match that ended in a 3-3 draw, last Saturday evening, at Griffin Park, in the sixth round of the English Premier League.

The professional Liverpool team, in its ranks, the Egyptian star Mohamed Salah, is preparing to face Porto, Portugal, tomorrow, at the “Dragao” stadium, in the second group competitions for the group stage of the European Champions League.