Manchester United‘s 3-1 defeat by Paris Saint-Germain on Wednesday night was a microcosm of their season: an upturn in results met with disappointment.

Two goals from Neymar and a close-range strike by Marquinhos saw United blow the chance to secure qualification for the last 16 stage with a game to spare.

Ole Gunnar Solskjaer’s side only needed a point but failed in their task. They now must avoid defeat at RB Leipzig on Tuesday – in what is one of three huge games for the club over the next eight days.

The trip to Germany is sandwiched by a visit to high-flying West Ham United on Saturday before the small matter of a Manchester derby against ‘noisy neighbours’ Manchester City on December 12 – both in the Premier League.

With such a pivotal week in the season coming up, Solskjaer has a lot of things to consider. 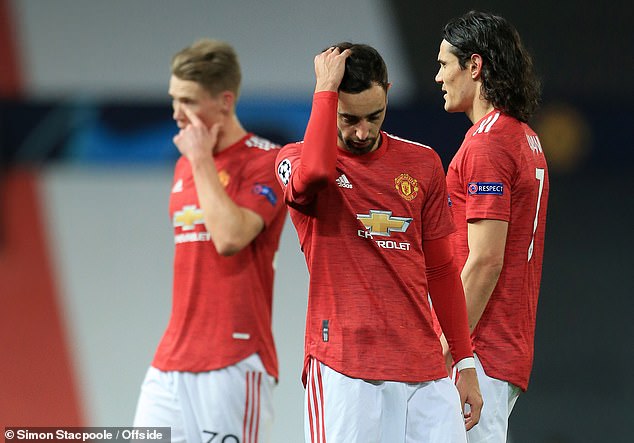 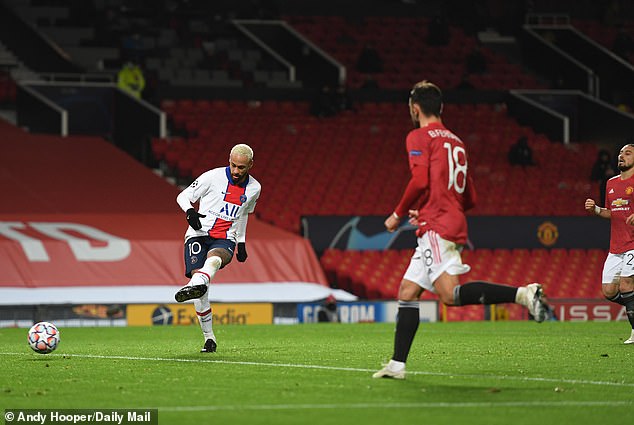 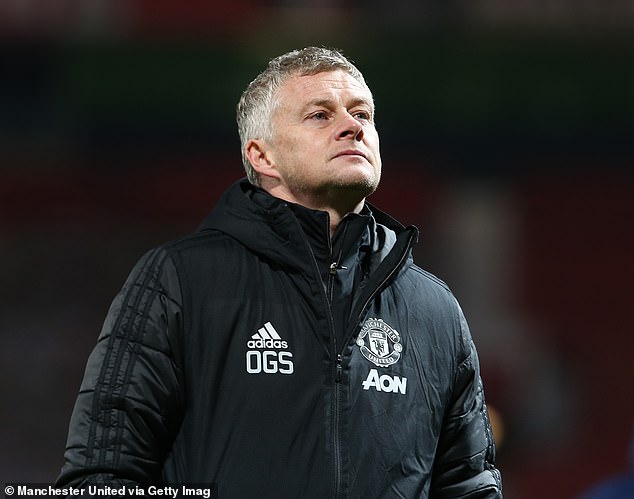 Anthony Martial was Manchester United’s top goalscorer last season but he has looked a shadow of himself so far this campaign.

Against PSG on Wednesday night, the France international wasted two glorious chances to put United ahead. The first was a horrendous miss, after a brilliant counter-attack, when he blazed over the crossbar with the goal gaping. The second saw his goalbound effort blocked by a brilliant Marquinhos tackle.

The 24-year-old’s inconsistencies have led to many believing he isn’t good enough to be United’s main No 9 in the past and Wednesday’s finishing will add to that. The impact of Edinson Cavani adds weight to the argument as he has provided the Red Devils with a reference point up front that they’ve lacked for some time. 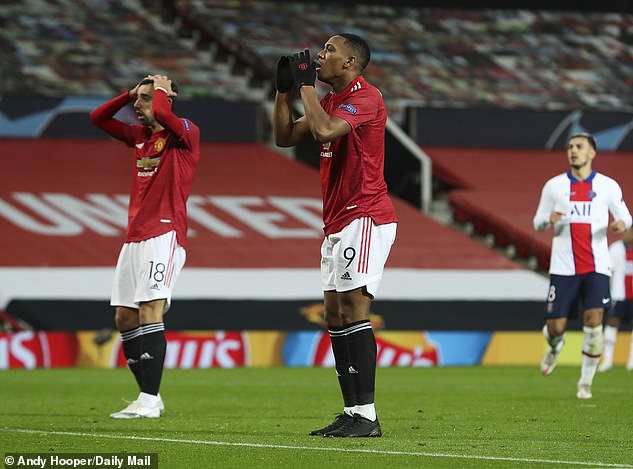 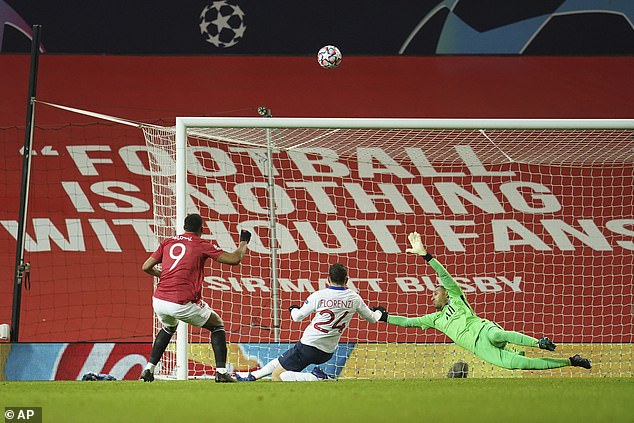 The Frenchman missed a glorious chance to put United ahead, but ballooned his shot over

Martial netted 23 goals last term but has only scored twice so far with both coming in the Champions League against Leipzig and Istanbul Basaksehir – the latter being a fine header to halve the deficit.

A three-match ban, following his red card against Tottenham, hasn’t helped the Frenchman’s cause but he hasn’t reached previous standards set.

Martial is capable of scoring the spectacular and going on a goalscoring run. With Cavani excelling up front, he needs to rediscover his form of 2019-20 in a crucial week for the club. 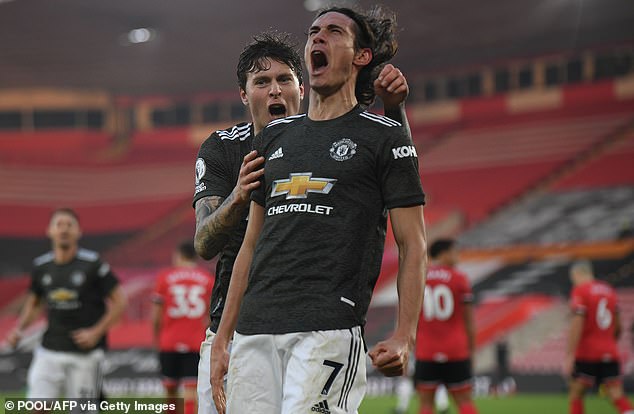 Replacing Fred for the trip to Leipzig

The Brazilian midfielder was sent off for two bookable offences during the Red Devils’ defeat. In truth, it’s a miracle he somehow survived on the pitch until the 70th minute as he was fortunate not to be sent off in the first half after butting heads with PSG’s Leandro Paredes.

However, his second-half dismissal now means he will miss United’s Group H showdown against Leipzig. 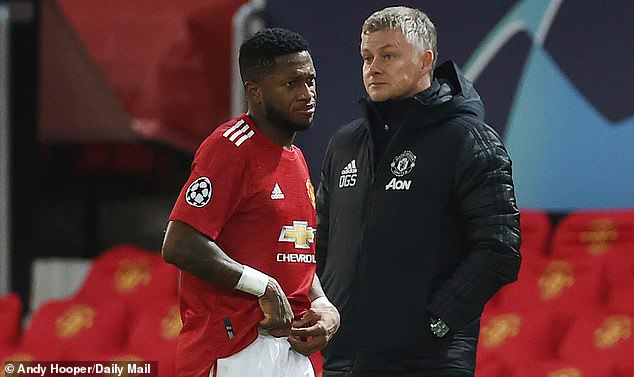 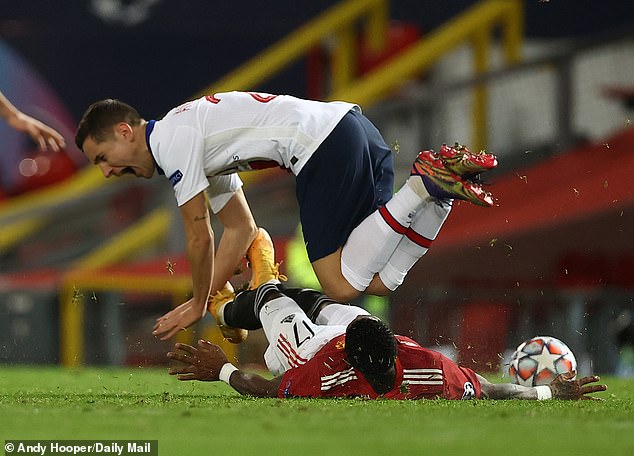 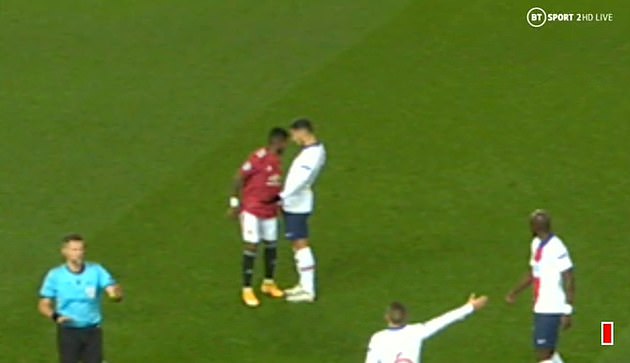 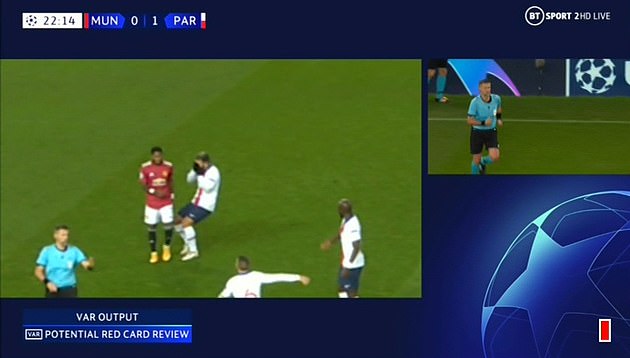 Paredes goes down clutching his face, but Fred avoided a sending off despite a VAR referral

The German outfit are high-pressing team and Fred’s energy will be sorely missed in the middle of the pitch for this game. He was part of a diamond midfield in the 5-0 win against them in the reverse fixture on October 28. His absence will now force Solskjaer to tinker any potential plans to revert back to that formation.

Waiting in the wings though are Scott McTominay and talisman Bruno Fernandes though. Neither started in the October victory. Fernandes, injury permitting, is a given to start and McTominay started in the PSG defeat too. If Solskjaer wants to adopt a diamond again for that game then Donny van de Beek can drop deeper allowing Fernandes to play at the tip of it with Paul Pogba and Nemanja Matic, who both started against Leipzig, reprising their roles. 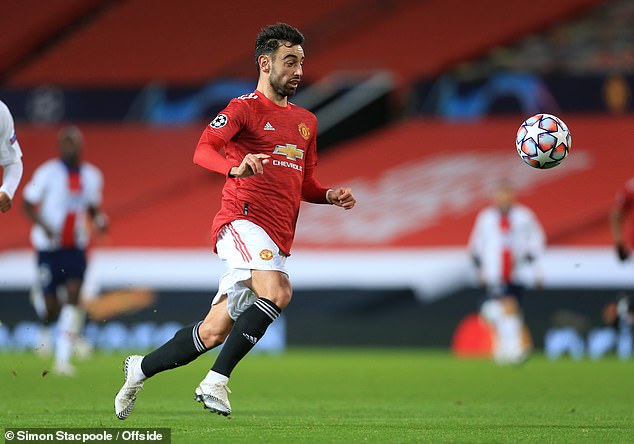 We’re now into December but this question still lingers – although not as prominently as it used to.

David de Gea is the current No 1 at United and the Spaniard should keep the shirt for the time-being. The return of Henderson has seen him up his game from the slump he suffered last season. 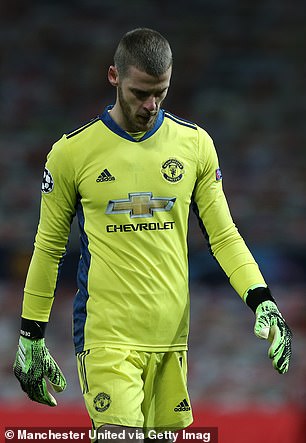 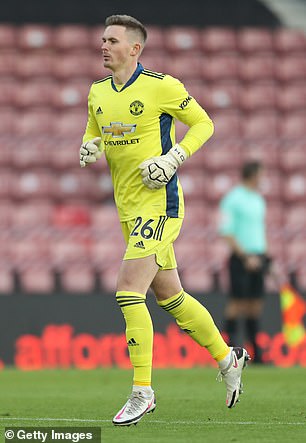 The goalkeeping position at Old Trafford was a source of contention going into the campaign with De Gea’s position under threat from a returning Henderson who had excelled on loan at Sheffield United.

However, Solskjaer has decided to keep faith with De Gea who so far he hasn’t let him down. This is justified by the fact he has featured 13 times for United to date this campaign, with Henderson playing just four times.

Henderson’s time will come at United but at present there is no reason to drop De Gea. 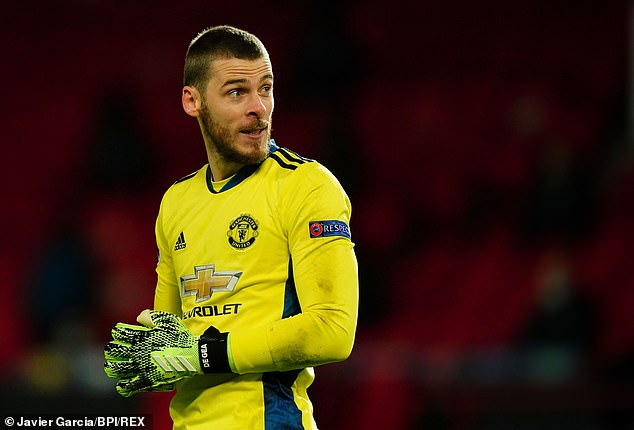 Marcus Rashford is Manchester United’s second top goalscorer this season with nine goals – one behind Fernandes – but could he be missing for the forthcoming games?

The 23-year-old was substituted with 15 minutes remaining on Wednesday with what appeared to be a shoulder injury.

‘It’s a niggling shoulder injury,’ Solskjaer told BT Sport after the final whistle. ‘Let’s see how quickly he can recover. Hopefully he will be ready for the West Ham game.’ 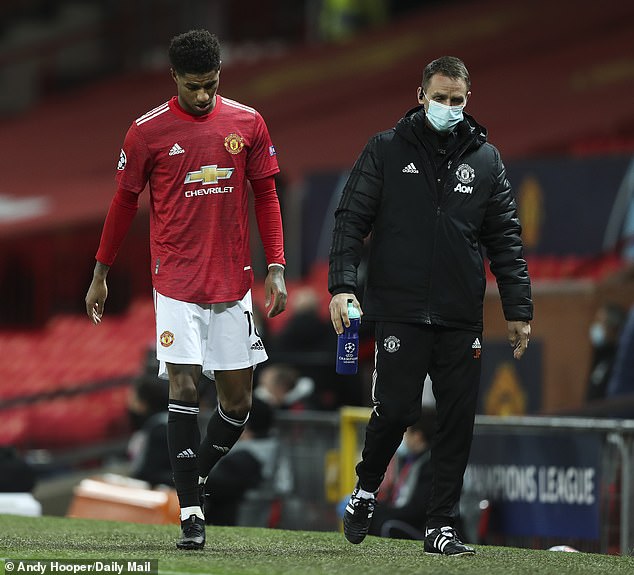 Rashford was forced to miss the recent international break with England last month due to the same problem – after aggravating it during United’s 3-1 win at Everton.

A similar period of absence would be a blow to Solskjaer ahead of their upcoming schedule.

Mason Greenwood would be the obvious replacement though, while the Norwegian can also call upon Juan Mata, Dan James and Jesse Lingard too. 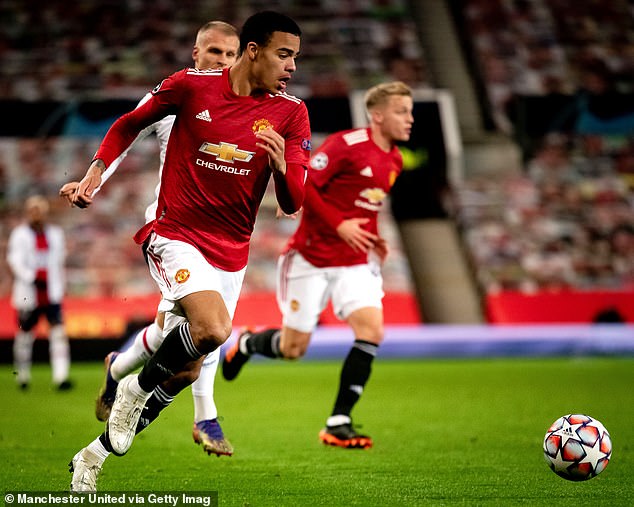 Reverting to a back three?

During his near two-year tenure at Old Trafford, Solskjaer hasn’t been afraid to show tactical flexibility when it comes to his defence. While he often prefers a back four, the 47-year-old has often deployed three at the back too.

This tactic has worked to great effect in the past – most recently in October’s 2-1 win at Paris Saint-Germain. 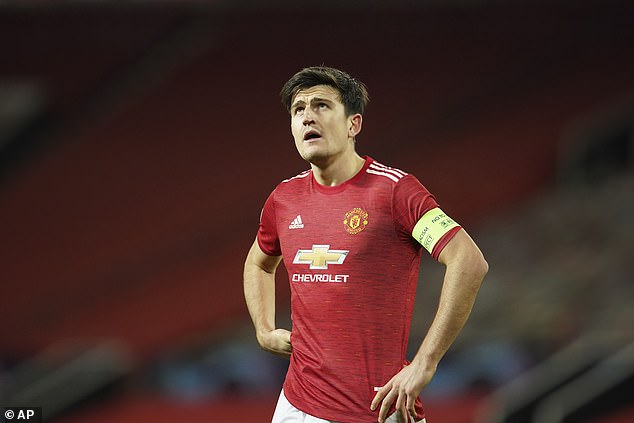 With the visit of Manchester City on December 12, don’t be surprised if Solskjaer looks to use this tactic once more. With City’s array of attacking talent needing no explanation, he’ll be too aware of their threat going forward.

Solskjaer has used this ploy against Pep Guardiola’s side before – their 1-0 win in the League Cup semi-final second leg last season – and has personnel who are comfortable in operating this formation.

If he chooses to go down this route then he could bring in Axel Tuanzebe or Eric Bailly alongside captain Harry Maguire and Victor Lindelof at centre back. Or, if fit, Luke Shaw could also come in as a left-sided centre back with Alex Telles at left-wing back. 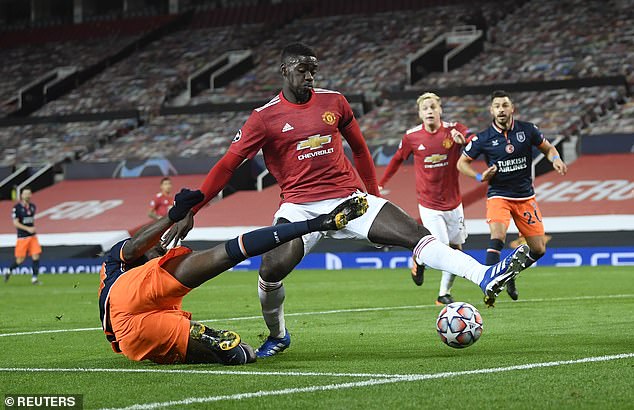 Axel Tuanzebe may come in as part of as a back three, for example, versus Pep Guardiola’s side

Solskjaer has been criticised for not being pro-active but reactive when it comes to substitutions and this was evident on Wednesday night.

It appeared clear to everyone that Fred was walking a tightrope against Paris Saint-Germain but he wasn’t substituted. In truth, the midfielder could’ve been hooked before half-time after getting away with a headbutt on Paredes and if not then definitely at the interval. However, Solskjaer and his coaching staff somehow saw otherwise. It was particularly baffling as you are allowed to make five substitutions in the Champions League and on the bench were midfield trio Matic, Pogba and Van de Beek.

For Fred to still be on pitch after the 70th minute was naïve from Solskjaer and his backroom team with the Brazilian having worn out the patience of referee Italian referee Daniele Orsati. 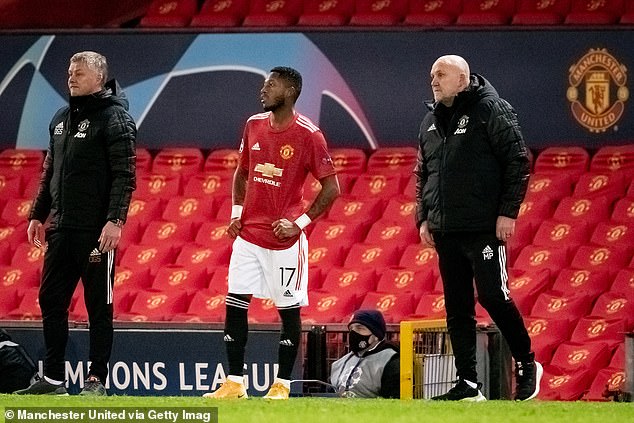 Speaking post-match, Solskjaer conceded he should have changed tact.

‘He played well but with the decision the referee made you maybe look back and say you should have [taken him off],’ he said.

‘But there was no reason from his performance to take him off.’

This area for Solskjaer needs to improve. He needs to make more inspired changes during a game – such as the one to bring on Cavani at half-time of their comeback 3-2 win at Southampton on November 29. 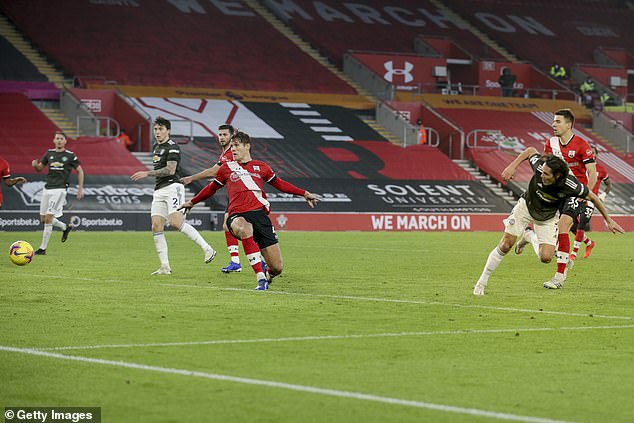