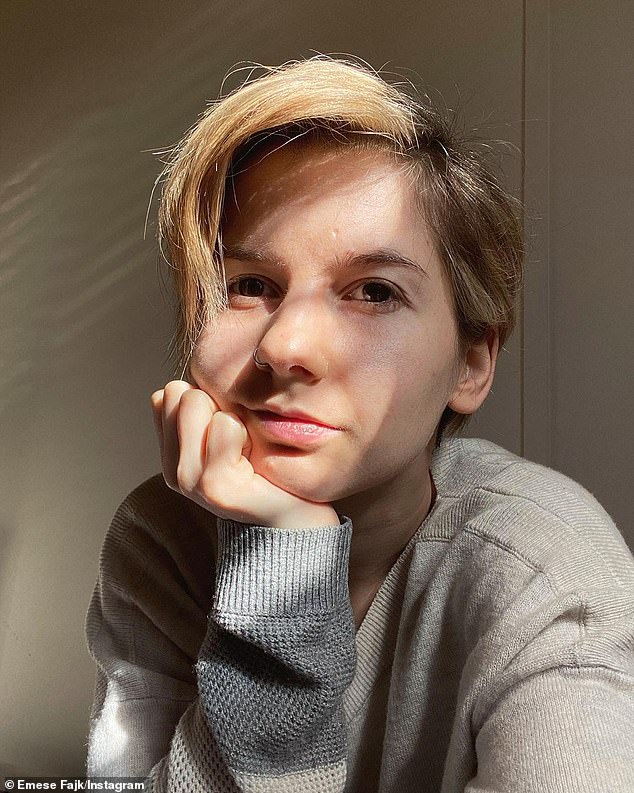 A mysterious buyer who failed to pay up after placing the winning bid on Tam and Jimmy’s home on The Block has denied forging bank documents.

Self-described cyber security consultant Ms Fajk insists she paid a $425,600 deposit to the Nine Network’s trust account on December 17, and a final settlement payment of over $4million the next day.

Ms Fajk – who claims to have worked with the United Nations and Apple – sent two screenshots to Nine this week. They allegedly showed she had transferred the money from her ANZ account using the ‘Pay Anyone’ internet banking tool.

But despite the screen grabs saying the funds transfers were ‘immediate’, the deposit never arrived and the final settlement failed on Monday.

Channel Nine on Wednesday night confirmed the payment still hadn’t come through, after Ms Fajk blamed her conveyancer for the bungle.

The conveyancer said he has since parted ways with her.

Self-described cyber security consultant Ms Fajk insists she paid a $425,600 deposit to the Nine Network’s trust account on December 17, and a final settlement payment of over $4million the next day

This is the screengrab of an ANZ bank transfer which Emese Fajk sent to Channel Nine as proof she had paid $4,072,951 to buy Jimmy and Tam’s property on The Block

Ms Fajk also claimed on social media on Tuesday that she was working with producers of The Block to get the payment issue rectified.

However, journalists with Channel Nine’s A Current Affair said producers of the renovation show have cut ties with Ms Fajk completely.

Ms Fajk also hit back at claims she sent a fake bank document to an ex-boyfriend apparently showing she had transferred him £50,000 (AUD$88,000).

Graphic designers from Nine claimed the document was clearly doctored, with edit marks appearing on Photoshop.

‘I don’t know what ex-partner they are referring to, but I never had joint finances with anyone I had a relationship with and certainly did not have any ex-partners I’d need to give 50,000 pounds to,’ she told Daily Mail Australia.

‘I have never seen nor sent any document to anyone showing any of that transfer or anything similar to anyone.’

She then claimed the documents had been sent to Channel Nine by someone who had ‘fabricated stories’ about her and was ‘trying to blackmail’ her.

Ms Fajk also claimed to have transferred $4million to the network for the house from her ANZ Advantage account.

While ANZ couldn’t comment due to privacy reasons, they did refute Ms Fajk’s claims as the bank’s daily transfer limit is just $25,000.

Ms Fajk told Daily Mail Australia that while there have been ‘some delays caused by the conveyancer’ regarding the settlement of the property, it is still her intention to complete the payment ‘as soon as possible’.

She also claimed to have transferred the $4million in an ANZ branch, refuting accusations she never paid up.

‘I have appointed a new solicitor with instructions to contact [Jimmy and Tam] to determine if we can enter into a new sales agreement and, if possible, arrange for an early settlement,’ she said.

She also said she stood by the PEXA forms sent to Channel Nine, and claimed they are authentic documents.

There is still hope on the horizon for Tam and Jimmy.

The Block producers are in talks with Danny Wallace, a man who was outbid by Ms Fajk by just $1000 on auction day.

‘It’s like saying, here, I’ll pay you – I’ve sent the money to EFTPOS,’ one source said.

A separate source clarified that while direct internet banking deposits such as this do happen, they are very rare.

Daily Mail Australia put written questions to Ms Fajk and the Hungarian-born Ballarat woman said there was an innocent explanation for what occurred.

‘As per my conveyancer’s instructions they were telegraphic transfers that take 3-5 days, as per ANZ’s website,’ she told the Daily Mail.

The Queensland couple renovated the stunning 1950s home, transforming it into a luxury property

A conveyancer is a specialised legal expert who handles property sales and Ms Fajk said her’s was no longer acting on her behalf as of Tuesday.

In social media posts, Ms Fajk has claimed the unnamed conveyancer was ‘clearly not up to this’ task.

Ms Fajk claimed she only received instructions for how to carry out the settlement the day before she allegedly wired across more than $4million.

‘Settlement and payments were delayed and I acknowledged this. It was my mistake to trust other people without doing my own homework,’ she said.

‘I learned my lesson and I’m trying to rectify the situation.

‘Given the time of year and how certain things had to happen at the very last minute, this might take longer than I’d like. But I’d like this resolved ASAP, within a few days.’

‘We started to get a bit concerned’: How The Block’s crew realised Jimmy and Tam’s sale was falling through – leaving the winning couple gutted

The Block’s executive producer, Julian Cress, told Daily Mail Australia that Ms Fajk had signed the contract on the day of the auction.

She then appeared to transfer the deposit to Nine’s trust account, on a computer, in front of their legal team.

‘Nothing was amiss at that point,’ Mr Cress said.

‘But I guess we started to get a bit concerned a few days’ later when the transfer didn’t complete and the money didn’t arrive.’

Afterwards, The Block contacted Ms Fajk through her legal representatives and received documents showing the money had allegedly been transferred.

‘We knew probably a couple of weeks ago that things were amiss.’

Worked hard: Jimmy and Tam Wilkins on site renovating the property into a modern marvel

Ms Fajk failed to meet The Block’s deadline of Monday for her final payment.

Mr Cress said the failure of the sale had been devastating for Jimmy and Tam.

‘They’re pretty gutted. It’s not the Christmas they were hoping for,’ he said.

‘But they’ve built an incredible house in the face of Covid and they’re not wilting flowers and they’ll bounce back.

‘They’ve got a lot to proud of, they built an incredible home and we still have that home and now it’s for sale.’

Nine has confirmed Jimmy and Tam are still the winners of The Block 2020 due to the previous unsuccessful bid entered by philanthropist Danny Wallis.

Fajk, 28, with the couple after winning the auction last month. Jimmy and Tam told A Current Affair how they watched the finale with Ms Fajk and a bottle of wine

Mr Wallis bought three of the homes for sale at auction day and could still be a contender when the home hits the market again.

Mr Cress said he was confident the house will have some keen buyers now that everyone knows it’s available again and how much it’s worth.

Meanwhile, Ms Fajk said she’s working with a new solicitor and is planning to ‘re-engage in a conversation about purchasing the house.’

Asked if Ms Fajk could still buy the home, Mr Cress said: ‘If she has $4.2million, sure.

‘That would certainly go a long way to showing she was serious about purchasing the house.

‘It’s Christmas. Miracles do happen.’ That said, he isn’t hopeful.

I realised things aren’t going to be smooth sailing last Tuesday. Less than a week till settlement. I looked up how the whole online settlement works and I realised I have no details for settlement, and I should have received those by that point.

I was also given wrong advice and information, or information I requested wasn’t provided.

It’s obviously disappointing and I’m hoping it won’t be the case.

As for studies and work, if anyone wants any references and actually asks for them, I’m more than happy to provide them and provide contact info. As stated in the past and shared publicly and shared with people close to this, this is how it should be done.

The main source of this story is a person who has been harassing me for over two years. When I asked about this yesterday, I was told he has nothing to do with it. This obviously wasn’t the case. This person threatened me with the media and courts etc, for over two years and despite his claim of private detectives following me, court cases etc he could never provide any evidence of any of this. He claimed I intimidated him and his family while he had me investigated in the UK. That alone would come with serious consequences. It never happened, just like anything else he accused me of.

Settlement and payments were delayed and I acknowledged this. It was my mistake to trust other people without doing my own homework. I learned my lesson and I’m trying to rectify the situation. Given the time of year and how certain things had to happen at the very last minute, this might take longer than I’d like. But I’d like this resolved ASAP, within a few days.

Sergey Lavrov: The Russian response to the US sanctions will be the same