Democrats all the way up to President Biden are warning the worst is yet to come after Hurricane Ida flooded the northeast and killed at least 26, as they push for costly climate change measures.

‘This is yet another reminder that extreme storms and the climate crisis are here,’ Biden said in an address on Hurricane Ida’s devastation.

‘Floods are going to happen with increasing frequency,’ he continued. ‘For us, this isn’t about politics. Hurricane Ida didn’t care if you were a Democrat or Republican. This destruction is everywhere.’

Biden said that when the Senate returns to Washington he would direct them to pass the $3.5 trillion budget reconciliation plan as part of his ‘Build Back Better’ agenda.

‘Experiencing all this flooding in NYC right now and thinking about all the politicians who told me that pursuing a Green New Deal to adapt our nat’l infrastructure to climate change is ‘unrealistic’ & ‘too expensive.” Rep. Alexandria Ocasio-Cortez, N.Y., wrote on Twitter. ‘As if doing too little is the responsible, adult thing to do?’

‘Members of both parties engage in misleading rhetoric and funny math to convince the public we are addressing climate change more than we are – & that includes parts of the current infrastructure plan,’ Ocasio-Cortez said. ‘We need a Green New Deal now.’

‘Global warming is upon us not a coincidence,’ Sen. Chuck Schumer, N.Y., said in a press conference Thursday. ‘It’s going to get worse and worse and worse.’ The majority leader used the moment to push for the infrastructure deal and budget reconciliation plan making their way through Congress.

‘That’s why it’s so imperative to pass the two bills, the infrastructure bill and the budget reconciliation bill.’

The $3.5 trillion budget plan, focused on ‘human infrastructure,’ would allocate almost $200 billion to be distributed by the Energy Committee, another $67 billion for Environment and Public Works and $135 billion for Agriculture, with a focus on reducing carbon emissions. The plan furthers President Biden’s agenda of a 50% reduction in emissions by 2030. 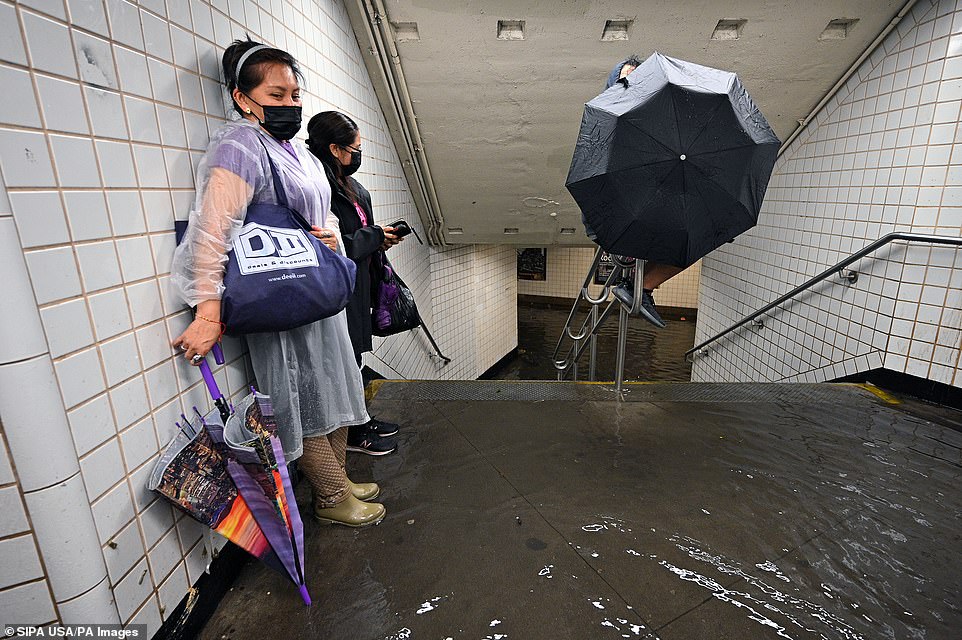 QUEENS, NEW YORK CITY: People stand inside a subway station as water runs past their feet during flash flooding caused by storm Ida 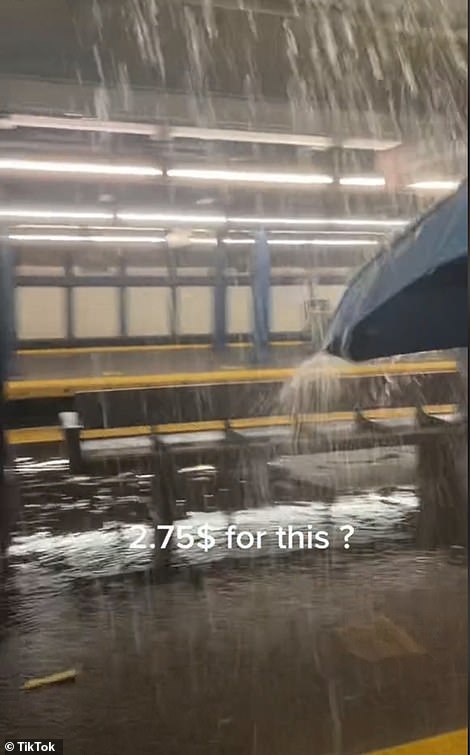 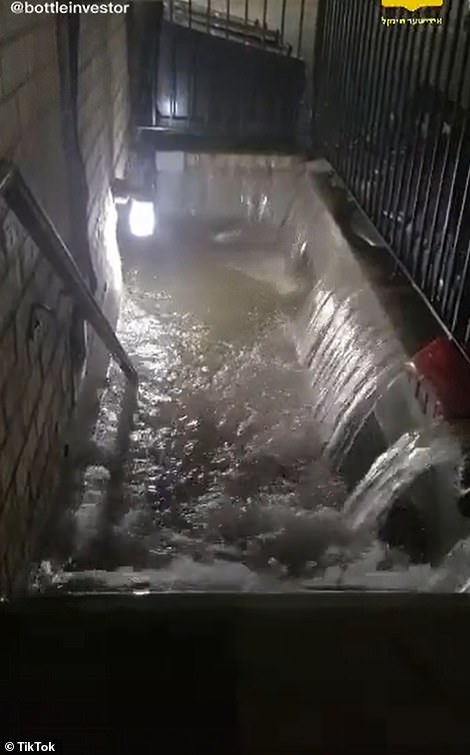 NEW YORK CITY: Trains were seen being swamped with cascades of water, while subway stations were completely flooded

‘A horrifying storm unlike anything we’ve ever seen before… The brutality of storms now. It is different. This is the biggest wake up call we could ever get. We’re going to do a lot things differently and quickly.’

New York’s new governor Kathy Hochul said that ‘Because of climate change, unfortunately this is something we’re going to have to deal with with great regularity.’

At least 26 people have been killed in the Northeast, including a family of three with a two-year-old boy who drowned in a New York City basement, after the tail-end of Hurricane Ida crept up on the tri-state area on Wednesday night bringing a month’s worth of rain in less than a day, flooding homes while people slept and tearing up parts of New Jersey with tornadoes.

Sweeney said: ‘you might had an occasional storm and wasn’t anything. These things are getting stronger and there’s more damage. We got to do something because it’s too late now.’

Nine people were killed in New York City as water rushed into basement apartments in Brooklyn and Queens and people all over the city became stranded in flooded subway stations. MTA bus drivers were deployed to the stations to pick people up who were stranded and get them to safety.

Eight of the NYC victims died in flooded basement homes. One person was found in the backseat of a car on Thursday morning, at around 10am.

‘How the climate crisis is an inequality crisis: Many of these deaths occurred in basement dwellings, many of which are illegal and growing in # due to the unaffordable housing crisis, but do not meet safety standards required to keep people safe in incidents like flash floods.’ 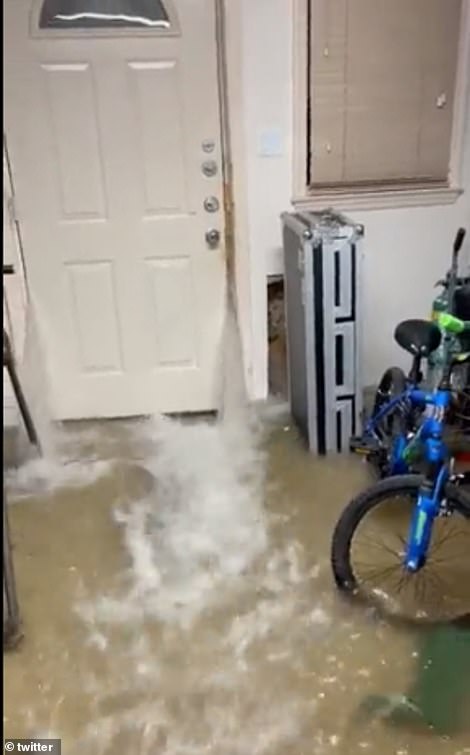 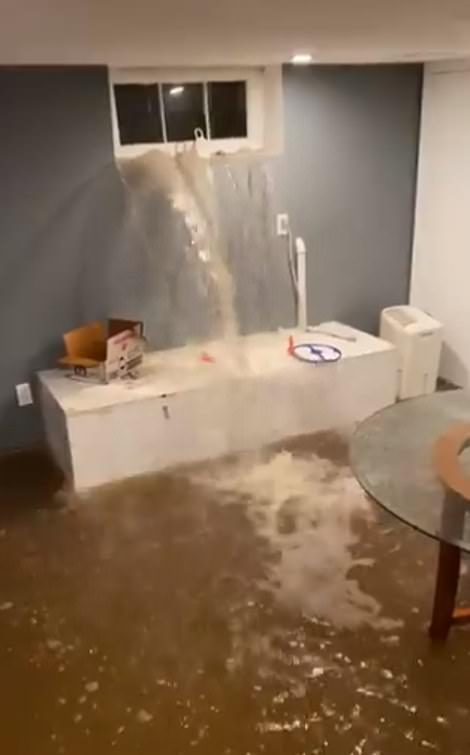 Basement apartments all over New York City, New Jersey and Pennsylvania flooded on Wednesday when the storm hit 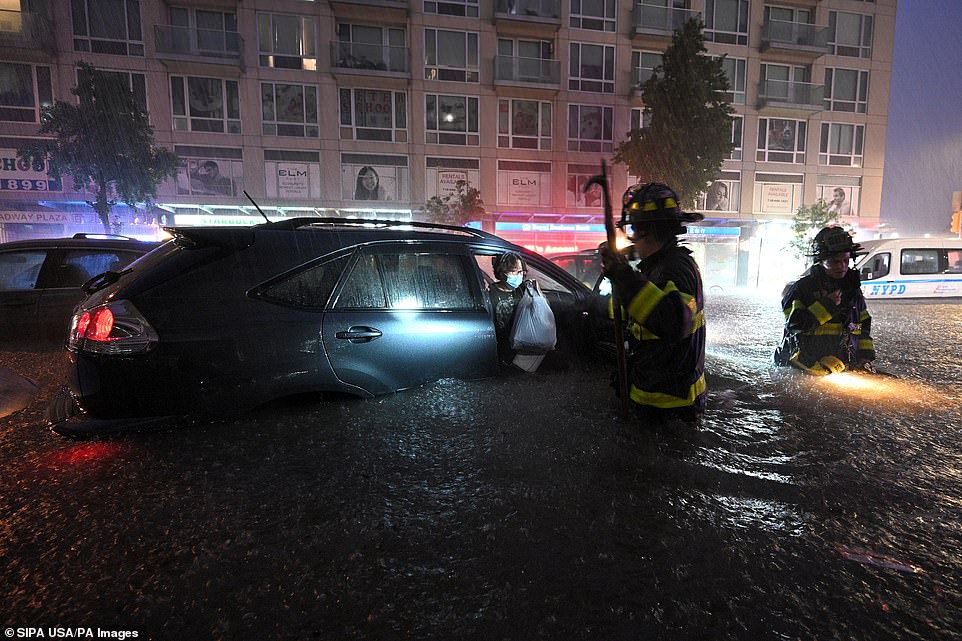 QUEENS, NEW YORK CITY: Members of the FDNY are pictured in waist-high water as they rescue a woman from her car 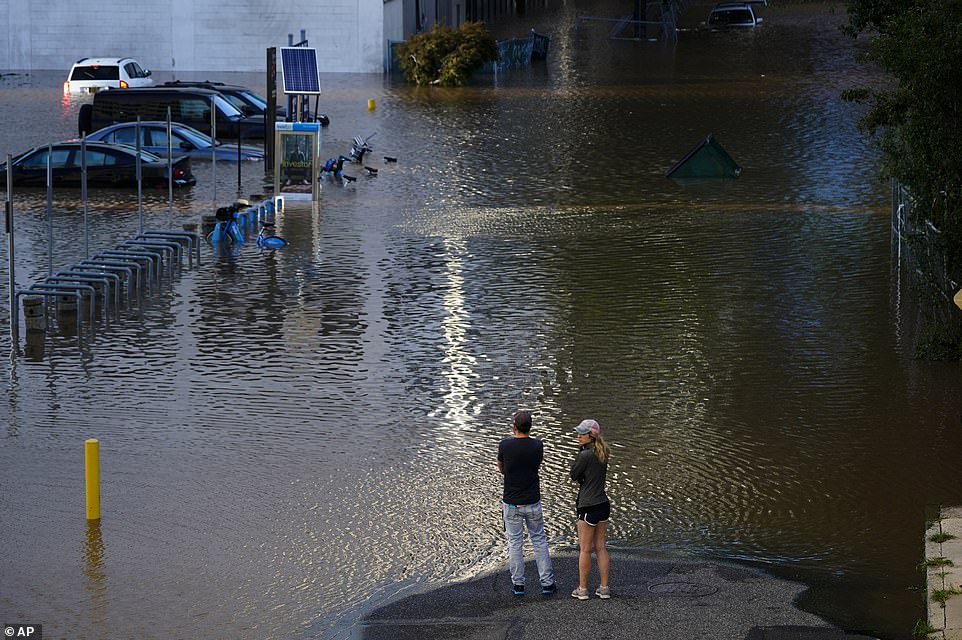 People view a flooded street in Philadelphia, Thursday, Sept. 2, 2021 in the aftermath

‘Knowing tornadoes are near our homes, seeing flash floods overtake our streets, I am beyond concerned for the future as these isolated storms turn ceaseless. Whoever needs further proof of a looming climate disaster, look outside,’ New York Rep. Yvette Clarke wrote on Twitter.

Fourteen people died in New Jersey – nine were swept away in cars that became submerged in the water and five died in an apartment complex in Elizabeth.

A 19-year-old man died in Maryland when the Rock Creek River burst its banks and flooded nearby homes, and one person died in Upper Dublin Township near Philadelphia, the town’s mayor announced on Thursday without giving further details.

More people have now been found dead in New York City from Ida than in Louisiana, which had days to prepare for the storm.

Meanwhile, President Biden declared an emergency in California over the Caldor wildfire, which has burned over 200,000 acres and forced tens of thousands to evacuate.

Last month a grim United Nations report predicted the earth is likely to warm by 2.7F within the next 20 years — a decade earlier than previously expected — and heatwaves, flooding and droughts will become more frequent and intense.

On Aug. 9, 234 experts warned in the report that the US is headed for disaster. Flooding, deadly fires and heat waves will not only become the norm but will intensify in a warming world, warns the 3,949-page assessment.

Humans have already heated the planet by roughly 2 degrees Fahrenheit (1.1C), since the 19th century, largely by burning coal, oil and gas for energy – with the US being one of the world’s top producers.

Scientists had expected temperatures to rise by 2.7F (1.5C) above pre-industrial levels between 2030 and 2052 but now believe it will happen between this year and 2040.