Lord Dyson’s report includes a litany of documents that expose Martin Bashir’s lies and the BBC cover-up that followed.

Among them are the forged (but hugely convincing) bank statements Bashir used to persuade Earl Spencer to introduce him to Diana.

Other documents include contemporaneous notes from the earl that reveal the incredible smears Bashir fed to him and his sister. The notes detail how Bashir told the princess that her car was being tracked and her phone bugged. He also claimed that MI6 had overheard Prince Charles plotting ‘the end game’.

These notes were key to Lord Dyson’s finding that Bashir had ‘little difficulty’ in playing on Diana’s ‘fears and paranoia’ to get his Panorama interview.

Rejecting the journalist’s claims that these documents were themselves ‘fabricated’, the former judge notes: ‘In a credibility contest between Earl Spencer and Mr Bashir, Earl Spencer wins convincingly.’

Forgeries shown by Bashir to Earl Spencer purported to show his head of security Alan Waller was paid thousands by the News of the World’s publishers and an offshore company. Other fakes depicted payments to Charles and Diana’s private secretaries. 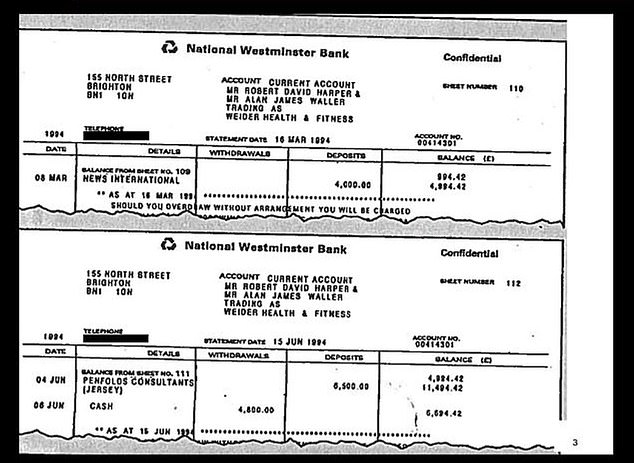 In his pursuit of Earl Spencer, Bashir wrote to his PA Carol Brigg on headed notepaper on August 24, 1995. He claimed he was ‘simply drawing material together’ and intended to ‘share some information which, I believe, may be of interest’. After the earl failed to respond, Bashir called to press the issue five days later. The men met for the first time later that day. 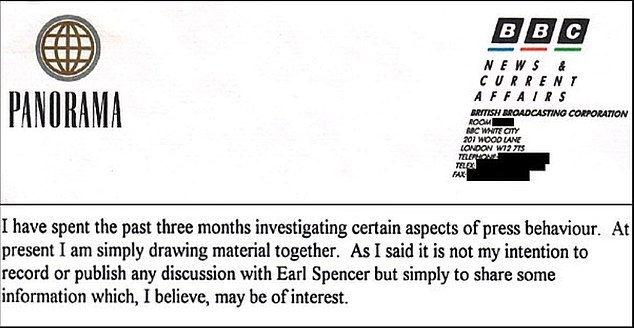 Earl Spencer took notes at his second meeting with Bashir on August 31, 1995.

He recorded claims that Mr Waller had received £4,000 every quarter from the News of the World’s publishers, News International, since June 1994. There is also a reference to payments from ‘Penfolds’ – the Jersey-based offshore company seen in the fake bank statements above. The earl does not believe Bashir had brought the forgeries to this first meeting, however.

In an apparent bid to play on Diana’s fears about love rivals, Camilla was described as ‘quiet for the time being’ while Prince Charles’s private secretary, Commander Richard Aylard, was said to be ‘terrified’ of the ‘v powerful’ royal nanny Tiggy Legge-Bourke.

Prince Philip was criticised over his ‘v unpleasant correspondence’. Of the hugely popular Diana, he reportedly said there was ‘more to being Princess of Wales than being a hero’. The Duke of Edinburgh was said to have been ‘even ruder’ about Fergie, however.

Seizing on Diana’s paranoia, Bashir told of ‘senior police officers making money’ and ‘three lines bugged’ at Kensington Palace. Other claims, seen in the note to the left, include that MI6 taped Prince Charles discussing the ‘end game’ and that the Spencer family were set to be ‘destroyed’.

Among the claims made at the meeting was that Sarah Ferguson had been ‘looked after’ by Prince Andrew following their separation. The couple’s divorce was finalised in 1996 – as was Charles and Diana’s

After meeting Bashir alone, Earl Spencer then spoke to him with Diana on September 19, 1995, at ‘Samantha’s flat’. The Mail has chosen not to disclose the precise location.

The earl took eight pages of notes, which include dozens of astonishing claims about the Royal Family and those around them. 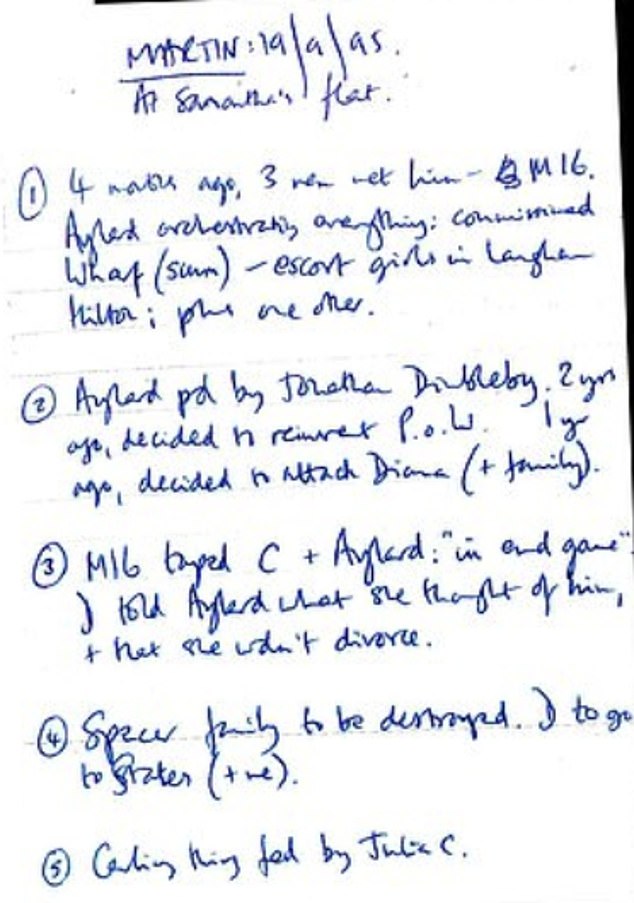 Bashir’s smears included the suggestion that Prince Charles was ‘in love’ with nanny Tiggy Legge-Bourke, and that Prince Edward had been treated in hospital for Aids. The earl concluded Bashir was a fantasist and apologised to his sister for wasting her time – only for the princess to agree to be interviewed by him for Panorama. 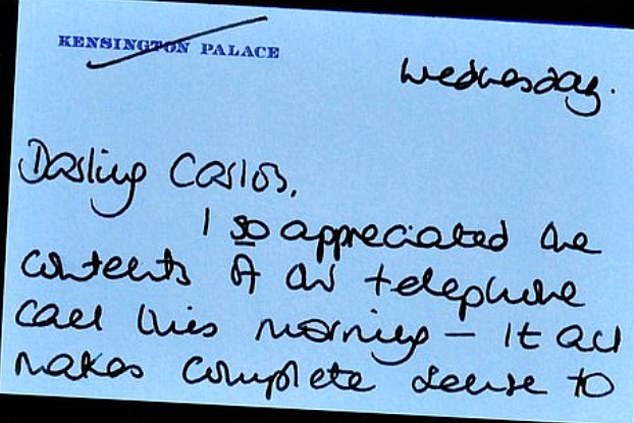 This heartfelt note of thanks from Diana to her brother Charles – using his family nickname, Carlos – was made public for the first time yesterday. Sent after the earl passed on Bashir’s claims she was being spied on, Diana says the allegations make ‘complete sense’ – showing she was taken in by the rogue reporter.

Tony Hall, then BBC head of news, sent Bashir a glowing note the day after the infamous Panorama episode was broadcast.

Hailing the ‘interview of the decade’, Lord Hall said: ‘I also think you have carried yourself during the whole episode in absolutely the app-ropriate fashion.’

In a handwritten statement dated March 28, 1996, Bashir attempted to head off concerns about his forgeries. In the message to BBC bosses, Bashir admitted commissioning the creation of fake bank statements, but claimed they were based on information from Diana herself and were only intended as a ‘reconstruction’. He apologised for showing the statements to Earl Spencer, writing: ‘This was a serious error and one for which I must take full responsibility.’ He claimed ‘there was no intent to deceive’, adding: ‘If I had known they were inaccurate… they would have been destroyed.’

US election 2020: How the world reacted to a Biden win

Belgium's players will kick the ball out of play in the 10th minute of their Euro...