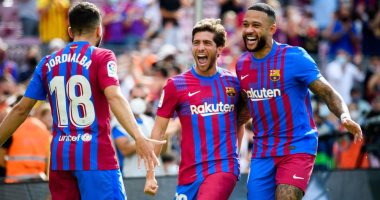 Barcelona will host Granada this evening at the Camp Nou, in a strong and exciting confrontation between the two teams in the fifth round of the Spanish League.

The Barcelona match against Granada will be held at nine o’clock in the evening, Monday, Cairo time

Brazilian Philippe Coutinho, the team’s midfielder, is preparing for the first opportunity with Barca in the Spanish League during the current season 2021-2022.

It is expected that Philippe Coutinho will give the opportunity to appear as a key player for the first time this season in the Spanish league against Granada, and the Catalan newspaper “Sport” said that Barcelona coach Koeman will return to a 4-3-3 plan against Granada today, after he was criticized greatly by the Barca administration headed by Juan. Laporta, after playing the previous Blaugrana matches with a 3-5-2 plan, which failed and led to a humiliating loss against Bayern Munich with three in the opening of the Champions League campaign.

According to the newspaper “Sport”, Barcelona will play tonight’s match against Granada, with a formation consisting of:

Koeman had said in the press conference before the match, “Barcelona is able to win any match, but there must be an active role in the attack as well as the defense, and I am not afraid to play with a group of young players, because Barcelona you cannot control it, but we will always find opponents of the approach and style.” “.

Barcelona occupies seventh place in the La Liga standings, with 7 points, and the injured players Jordi Alba, Pedri, Dembele and Aguero continued their recovery procedures, while Braithwaite underwent surgery last Thursday, for his left knee injury and is still recovering.