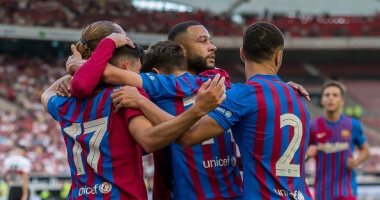 Barcelona will host Cadiz at the Ramon de Carranza stadium, in the sixth round of the Spanish League.

The date of the match Cadiz vs Barcelona

The Cadiz match against Barcelona will be held today, Thursday, at ten in the evening, in the sixth round of the Spanish League competition, on the . channel beIN Sports 1 HD Premium.

Barcelona is in eighth place in the Spanish league standings, with 8 points, while Cadiz is in 13th place with 5 points.

The Barcelona team is in a state of confusion and poor results, under the leadership of Dutch coach Ronald Koeman, which has brought its future into a bottleneck.

Barcelona stumbled against Granada in the fifth round of La Liga, drawing 1-1 amid fierce criticism from the Blaugrana fans, objecting to the technical level of the Catalan team, and the continuation of Dutch coach Ronald Koeman.

Barcelona also started its Champions League campaign with a heavy defeat against Bayern Munich 0-3 at the Camp Nou stadium.

Barcelona’s fall against Bayern Munich, and the stumble against Granada, put the future of Dutchman Ronald Koeman in a dark tunnel, and he faces the specter of leaving the technical leadership of the Catalan team.

Koeman was closer to leaving Barcelona coach, after the last draw against Granada, but the administration postponed its decision until today’s match against Cadiz, and in the event of a stumble again, there will be a decision to dismiss him immediately.