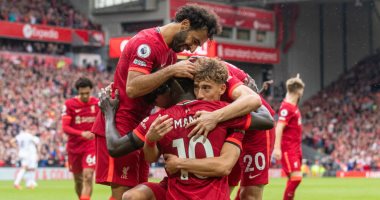 The professional Liverpool team, in its ranks, the Egyptian star Mohamed Salah, will be a heavy guest against his counterpart Leeds United, in the confrontation scheduled to take place at 5:30 pm today, Sunday, at the “Island Road” stadium, in the fourth round of the English Premier League competition “Premier League” of the season. The current season is 2021-2022, and the match is scheduled to be broadcast on beIN Sports 1 HD Premium.

Liverpool enters tonight’s match and is ranked fifth in the English Premier League table before the start of the round matches, as it has 7 points collected from two victories and one draw, while Leeds comes in the fifteenth place with two points from 3 matches, where it tied two matches and lost one match.

Liverpool, led by coach Jurgen Klopp, is looking for its third victory this season in the English Premier League, as it overcame Norwich City by three goals in the first round, and then beat Burnley 2-0 in the second round.

Dutch defender Virgil van Dijk appears ready to participate with Liverpool against Leeds after suffering a minor injury during the Netherlands team match against his Turkish counterpart, while the Reds are missing the Brazilian Roberto Firmino and the Japanese Minamino..