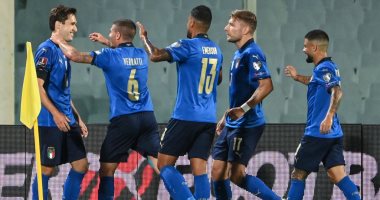 Switzerland hosts The Italian national team, today, Sunday, in the fifth round of Group C, for the European qualifiers for the 2022 World Cup.

The match between Switzerland and Italy will start at nine in the evening and will be broadcast on beIN SPORT Premuim HD.

Italy enters the match tonight and is at the top of Group C with 10 points from 4 matches, while Switzerland is in the group runners-up with 6 points from only two matches, during which it won.

Italy is trying not to lose in the match tonight, to achieve a record in the series of the longest unbeaten teams, after equaling in the previous match with Bulgaria the record of Brazil and Spain not losing in 35 games in a row.

In tonight’s match, the Swiss national team will miss the efforts of its captain, Grant Xhaka, the Arsenal player, who was infected with the new Corona virus.

Also today, Bulgaria will meet in the same group, which is fourth in the group with two points, and will host Lithuania at home, while Northern Ireland will not play, given that the group includes only 5 teams.

What is rheumatic fever and how do children get it?