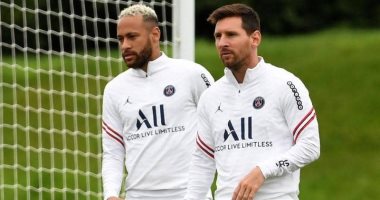 Argentine duo Lionel Messi and Italian Marco Verratti, players of French club Paris Saint-Germain, participated in the team’s group training today, Sunday, after recovering from injury in preparation for facing Manchester City in the second round of the group stage in the Champions League..

And the French radio “Monte Carlo” confirmed that Messi and Marco Verratti, players of Paris Saint-Germain, participated today in the group training of the Parisian team, two days before the Manchester City match..

Messi and Verratti missed Saint-Germain’s 2-0 victory over Montpellier, yesterday, Saturday, in the eighth round of the French League..

Radio . added RMCLionel Messi’s condition is improving over time, he and Marco participated in today’s training, and there is great optimism that the legend will be in the starting lineup to face Manchester City.

And the French radio continued, tomorrow, Monday, will be a decisive day for Messi’s participation and push him fundamentally.

The radio indicated that Marco Verratti and Lionel Messi participated in the entire session of the day, however, Messi still has to wait for confirmation of his improvement tomorrow morning to secure a place in the group against Manchester City, and the club is optimistic.

And two days ago, Argentine star Lionel Messi, player of the French club Paris Saint-Germain, took advantage of the period of his absence from participating with his team due to injury, to spend time with his children and his wife, international model Antonella Roccuzzo, where the latter published a set of photos through her personal account on the Instagram website, showing them during their stay. Some time in a restaurant.

Mauricio Pochettino, coach of the French club Paris Saint-Germain, revealed the position of Argentine star Lionel Messi, the team’s player, from participating in the upcoming matches.

How do you deal with your teenage girl’s rebellion? Give her a space of privacy and an opportunity for expression