Watching the fans of Lewes FC queue dutifully to have their temperature checked at the gate, chairman Stuart Fuller allowed himself a brief smile.

Then he reeled off the myriad safeguarding measures that allowed us to watch Tuesday night’s match at The Dripping Pan, the club’s wonderfully quirky stadium.

‘It’s been an absolute nightmare,’ he admitted. ‘The first task was to measure the exact size of the stands and terraces and work out how many people could be accommodated while complying with Covid social distancing rules. 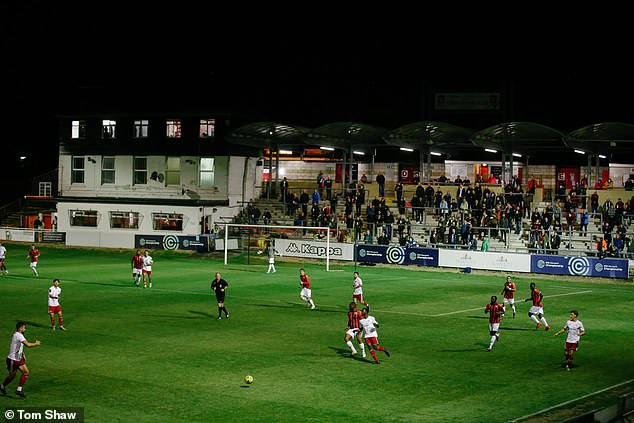 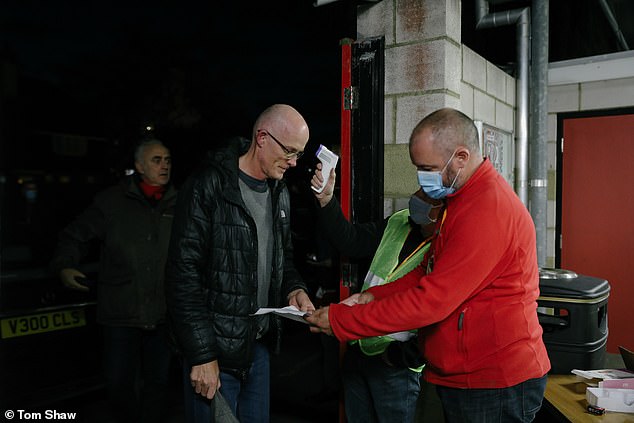 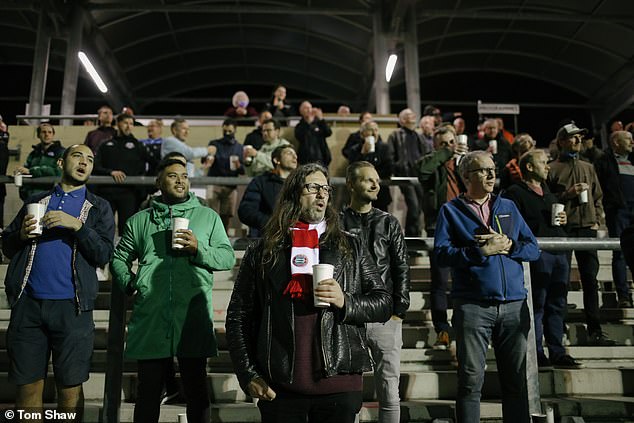 Tickets were sold online, so the club could track and trace spectators should the need arise

‘That was quite complicated — it took us a full day-and-a-half. We had to take photographs of the ground, then convert them into an Excel sheet.’

The number they arrived at was 450, just under one-sixth of capacity. Sold online, so the club could track and trace spectators should the need arise, every ticket was snapped up within days. Such is the growing thirst for live action, as opposed to the sterile, atmosphere-devoid stuff being served up on TV.

But the logistics hadn’t stopped there. Only six players are permitted in the dressing rooms at any time, so the away team — on Tuesday night it was local rivals Worthing — must now change and shower in a nearby cricket pavilion.

Since team-sheets cannot be handed to the officials, they are emailed before the game. Special detergent must be used to wash the kit. Then, after the match, the ground must be disinfected by a team of cleaners.

For a shoestring community club such as Lewes, which was saved from a winding up order 10 years ago by benefactors who bought the club for a nominal £1 and is now owned by a disparate band of stakeholding supporters — some 1,600 of them from more than 30 countries — it is a colossal and costly operation.

But judging by my uplifting visit, it is proof positive that, even with the pandemic resurgent, football in the raw can still be enjoyed safely as long as sensible precautions are observed.

To even ardent followers, it might come as a surprise to learn that spectators are still allowed at any matches.

However, at the so-called ‘non-elite’ level of the game, Step 3, comprising the Isthmian League, covering London and much of the South East, plus the Northern Premier League and Southern League, crowds to a maximum of 600 are permitted, as long as coronavirus security measures are in place. 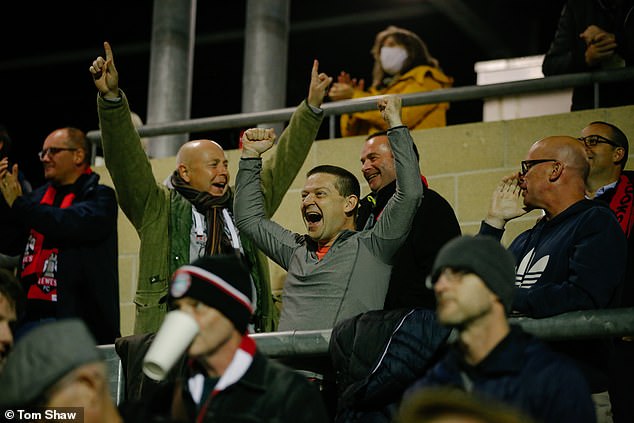 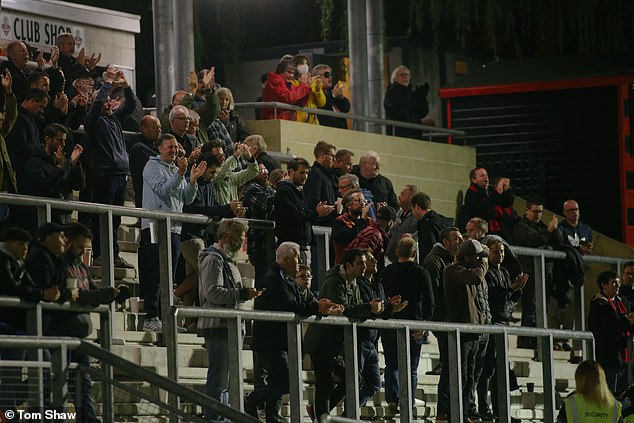 These are early days, of course, but the plan seems to be working just fine. Four games into the new season, attendances are being swollen by those who would usually watch Premier League and EFL teams. And yet not one attendee has been reported to have contracted coronavirus.

According to Fuller, this strongly suggests that supporters could return — in limited but significant numbers — to far bigger grounds without fear of spreading the contagion.

‘If we can accommodate 450 or more, why shouldn’t they allow say 5,000 at somewhere like Old Trafford, which holds 75,000 and is far better equipped to put safety measures in place?’

Still more ‘ridiculous’, he added, is the plight of Lewes Women FC. Two years ago, the club was dubbed ‘Equality FC’ after unveiling a policy of wage parity between male and female players. Last season, the weekly salary budget for each team was about £2,500 and they attracted a similar average gate of around 500. They use the same stadium and facilities.

Yet because the female side play in the FA Women’s Championship and are classed as ‘elite’, no one can watch their games. ‘Madness!’ Fuller exclaimed. 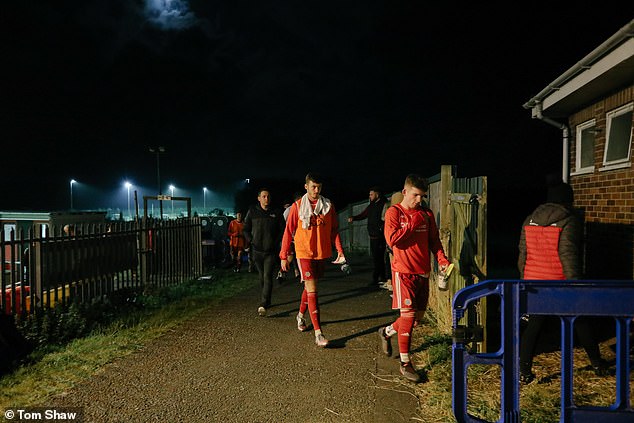 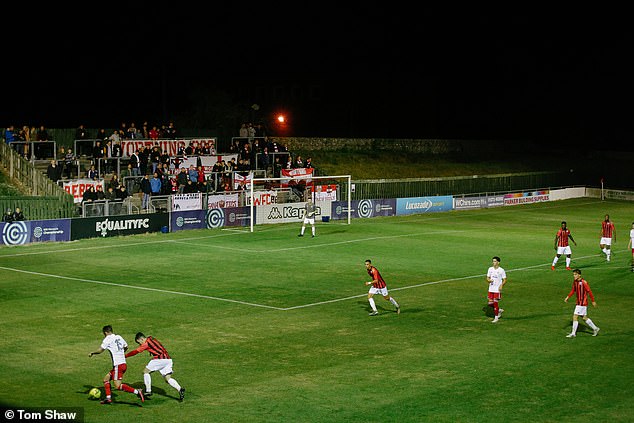 Nursing an ankle, injured early in Tuesday’s game, Lewes’s long-serving striker Luke Blewden, 29, a builder by day, reflected on more such ‘craziness’. ‘This Saturday, my old team Tonbridge Angels are playing away to Farnborough in the FA Cup,’ he said during the half-time interval.

‘Farnborough’s supporters can go to the game because they are a ‘non-elite’ club but Tonbridge’s can’t because they’re a couple of steps up. So does that mean Covid can distinguish between elite and non-elite footballers? Anyway, how do they stop Angels fans buying tickets? They could just leave their scarves at home, couldn’t they?’

Perhaps that is a matter for Matt Hancock to ponder, but at this game everything went so smoothly that it was a shame no one from the Government’s Scientific Advisory Group for Emergencies was there to see how well it worked.

One of the country’s oldest surviving grounds, with recommissioned wooden beach huts serving as executive boxes, the Pan is divided — for the period of the pandemic — into halves each holding 225 fans.

This being one of football’s more eccentric clubs, they are named ‘The Pies’ and ‘The Fries’, after the type of half-time snacks on sale in each area. If, like me, you had a ticket for ‘The Pies’, you could either sit in any seat marked with a green tick, or stand at a sensible distance from the nearest person.

Masks were required for entry to the bar. Understandably, exuberance did get the better of a few fans, who hugged and high-fived as the goals went in — three for Worthing, one for Lewes. But by and large, the standard of behaviour among fans was exemplary. 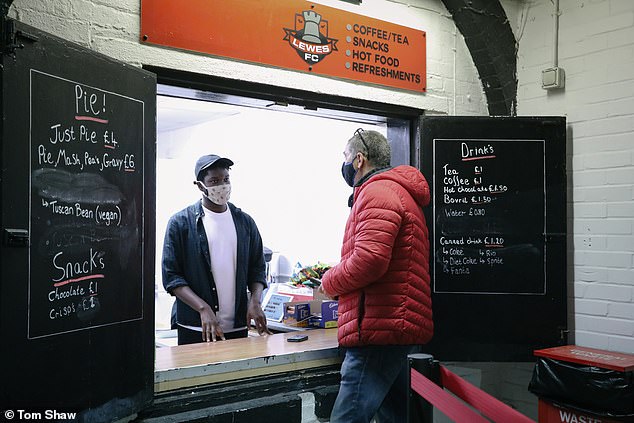 For this neutral observer, the joy of hearing real fans chanting (and making my own mind up whether Lewes’s goalkeeper was rightly sent off rather than relying on VAR) was made complete when I won the £25 ‘golden goal’ draw.

There were only two minor disappointments. I missed out on the £4 Tuscan bean pies because there weren’t enough to meet demand, and the electric thermometer aimed at my forehead registered a worryingly sub-normal 33.2C.

‘Don’t worry, love,’ trilled the woman who sold me that winning ticket. ‘When they aimed that thing at me, it said I didn’t have any temperature at all. I think I must be a vampire.’

Banter. It’s what being among genuine football people on match-night is all about and I’ve missed it.

Season tickets for The Dripping Pan are selling fast, they tell me, but for as long as there is still a green tick on one of those seats in ‘The Pies’, I’ll be heading back. 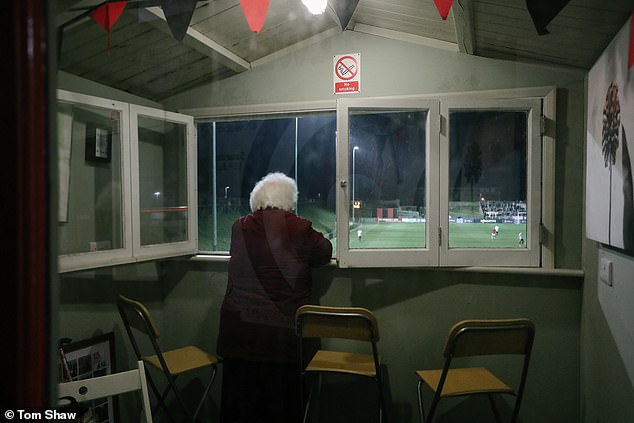