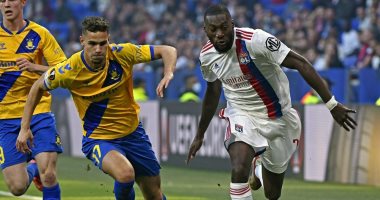 The Czech team, Sparta Prague, defeated Glasgow Rangers, Scotland, 1-0, in the match hosted by (Stadion Letna) in the second round for the first group of the Europa League group stage.“.

The goal of Sparta Prague came through David Hanko in the 29th minute of the first half time.

With his victory, the Czech Prague raised his score to the 4th point, occupying the rank of the first group, while the Scottish Rangers suffered their second loss, in a row, to the bottom of the standings..

Olympique Lyonnais beat Denmark’s Brondby 3-0 in the match held at the Groupama Stadium..

The first and second goals were scored by Cameroonian striker Karl Toko Ekambi in the 64th and 71st minutesThe third goal was signed by Houssem Aouar in the 86th minute.

Lyon achieved its second victory in a row, to raise its score to the 6th point, occupying the top of the group standings, while Brondby came in 3rd place with one point.

as Olympiacos of Greece continued its strong start in the fourth group of the European League with a second successive victory, this time with a hat-trick that rained against its Turkish host Fenerbahce today, Thursday, in the second round of the group.

And at the (Shukri Sirajoglu) stadium in Istanbul, the Greek team advanced early in the result after 6 minutes from the start thanks to its Brazilian striker, Francisco Soares “Tekinho”, a goal that ended in the first 45 minutes..

In the second half, the Greek champions were not satisfied with this goal, but added two others, which ended the match “clinically” in the 62nd and 68th minutes, provided by the young winger, Yorgos Masuras..

With this big win, Olympiacos reaps the full mark in the first two rounds to lead the group with six points, while Fenerbahce is satisfied with the point it gained from its tie in the opening round with a goal against Eintracht Frankfurt, Germany..

In the same group, German Eintracht Frankfurt breathed a sigh of relief with the victory of the first killer in the Belgian Royal Antwerp with a clean goal at the (Büzelstadion)..

The German team owes this precious victory, which was delayed until the first minute of stoppage time to Portuguese striker Goncalo Paciencia, who scored the only goal from a penalty kick..

Thus, Eintracht tastes the first victory, raising its score to 4 points in second place, two points behind Olympiakos, while the Belgian team suffered its second loss in the group to be at the bottom of the group standings without any points..

DeAndre Ayton anticipates a remarkable new improvement in his game

Is it time to buy Broadcom stock after agreeing to sell BlazeMeter to Perforce?

Is it time to buy Broadcom stock after agreeing to sell BlazeMeter to Perforce?