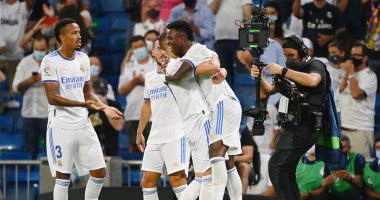 The Spanish teams, Real Madrid, and their Italian rival, Inter Milan, are armed with many stars in the fiery confrontation that brings them together at exactly nine o’clock on Wednesday evening, at the “Giuseppe Meazza” stadium, in the first round of the European Champions League competition for the current season 2021-2022.

And the official website of the European Football Association “UEFA” published the expected line-up for the Inter summit against Real, and it came as follows:

The expected formation of Inter Milan against Real Madrid is as follows:

And the coach of the first football team at Real Madrid, Carlo Ancelotti, had announced the list of players, and the most prominent features of the list are the continued absence of Gareth Bale, Toni Kroos and Marcelo with injury and the return of defender and left-back David Alaba, along with Luka Jovic.

The Inter Milan team had fallen into the trap of a draw against its host Sampdoria, with a score of 2-2 in the match that brought them together on Sunday afternoon, in the third round of the Italian League competitions, at the “Luigi Ferraris” stadium.

With this result, Inter Milan raises its score to 7 points in fourth place in the Italian League standings, while Sampdoria reaches 2 points in 15th place.

Celebrities who sent messages with their looks at Met Gala 2021.. Women’s empowerment and equality