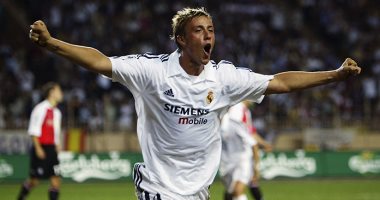 The former Real Madrid player and former coach of Maria Jose Maria Gutierrez “Guti” expressed his openness to coaching Barcelona if he received an offer from the Catalan club, which has been suffering from poor results during the recent period.

Ahead of the La Liga ambassadors’ party in Madrid, Guti, when asked if he would accept Barcelona’s training, replied: “Why not? One wants to train, to be able to understand people that in addition to being a player, one has the motivation to be able to train and do things well.”

And the player, who was playing in the midfield position in the ranks of the “Merengue”, considered that he was aware that the situation of the Barcelona team was “complicated”.

He continued: “I think that often bad results do not depend only on the coach, but it is true that he is the most responsible. It is a complicated decision because Barcelona is not good from an economic point of view, sacking (Ronald) Koeman forces them to pay him. And signing another one as well. A very complicated position for (Joan) Laporta at the moment.”

On the other hand, Argentine coach Marcelo Gallardo refused to comment on whether he had communicated with the management of Barcelona to lead the team, stressing today, Friday, that he intends to complete the term of his contract, which expires next December, with River Plate..

Gallardo held a press conference today, Friday, to talk about the Super Clasico match with Boca Juniors, which will be held next Sunday, and said: “I was hesitant about holding the press conference because I was aware that I had to answer a question that I did not want to answer after what was reported recently, because I focus on an image I will complete the match on Sunday, and everyone is aware of my intention and that my decision is to complete the term of my contract“.

It is reported that Barcelona has suffered from poor performance and results since the start of the season, which raises rumors about the possibility of the departure of Dutch coach Ronald Koeman from the team..

Is Jefferies Financial a buy after topping earnings expectations by 51%?