The hidden catch behind your fish and chips

Step by unprecedented step, Britain is starting to wean itself off its plastic addiction.

Just six years ago, each of us used on average 140 plastic shopping bags a year: now it’s ten.

Plastic straws, cotton buds and stirrers have all been banned, and more and more of the plastic we use is being recycled rather than thrown away.

This revolution, largely driven by Daily Mail campaigns, is partly caused by revulsion at what is happening to the world’s oceans. 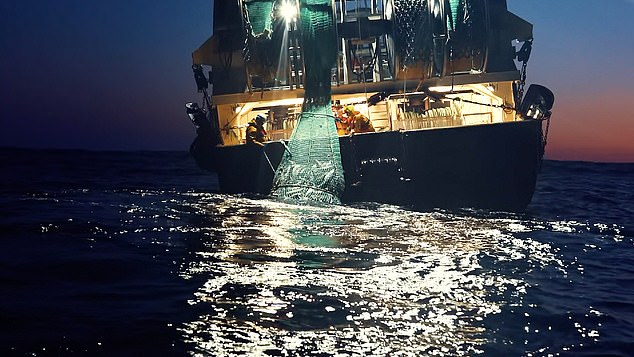 Discarded plastic nets, lines and other gear from fishing fleets are especially deadly: after all, they are designed to kill. They also destroy marine habitats, and even interfere with catches

Every minute of every day, the equivalent of a truckload of plastic is dumped into them — 12 million tonnes a year — where it kills marine life of all sorts.

Yet, vital as it is for this pollution to stop, the greatest source of large plastic rubbish in the oceans is already there. Despite being particularly dangerous, it receives far less attention, and has so far provoked much less action than what we generate on land.

Discarded plastic nets, lines and other gear from fishing fleets are especially deadly: after all, they are designed to kill.

They also destroy marine habitats, and even interfere with catches. But they largely remain the guilty secret of one of the world’s most destructive industries.

This is highlighted in the spectacularly successful — and hugely controversial — Netflix film Seaspiracy, which last week soared to become one of the most popular films on the streaming service.

The documentary, featuring British filmmaker Ali Tabrizi, launches a wholesale assault on the industry, covering overfishing, destructive trawling, fish farming and even slavery in some fleets.

Viewers have reported being driven to tears, ‘destroyed’ and ‘heartbroken’ by what they have seen.

Many have sworn to stop eating fish, as urged by the film. Celebrities and some leading greens have applauded it.

But others — including environmentalists who have long fought against the evils it exposes — have accused it of exaggeration, cherry-picking facts, selective quotation and inspiring despair rather than thoughtful action.

Its makers have hit back, but for me, too, it appears to cross the line between investigative journalism and straightforward campaigning.

The documentary, featuring British filmmaker Ali Tabrizi, launches a wholesale assault on the industry, covering overfishing, destructive trawling, fish farming and even slavery in some fleets

Nevertheless, it is right to feature discarded plastic fishing equipment, often called ‘ghost gear’ for catching and killing wildlife long after it has ceased active use. Every year, at least 640,000 tonnes of it — the weight of more than 50,000 double-decker buses — is dumped or lost at sea.

Nearly a third of all fishing lines — some which can be over 100km long, with more than 2,000 hooks — are discarded every year, as are almost one in ten lobster pots and other traps, and more than one in 20 fishing nets.

Most are made of plastic, for lightness, durability and the low cost. They make up about one-tenth of the material in the world’s oceans, and a much bigger proportion of larger plastic trash. Nets alone account for 46 per cent of all the plastic in the great garbage patch covering 1.6 million sq km of the Pacific — an area three times the size of France.

‘Ghost gear’ makes up 85 per cent of the rubbish resting on some underwater mountains and ocean ridges — and 60 per cent of the trash littering beaches of uninhabited Henderson Island in the remote British Overseas Territory of the Pitcairns in the South Pacific, for example.

By contrast, straws — which get much government attention — contribute only 0.3 per cent of ocean plastic waste.

Fish and other sea creatures get entangled or trapped in ghost gear, where they starve or are picked off by predators.

By one estimate, cited by the activist group Sea Shepherd — much-featured in Seaspiracy — discarded fishing gear is responsible for about a third of the decline of some fish populations, while the charity World Animal Protection reckons it kills or injures more than 100,000 whales, dolphins, seals and turtles annually.

Ghost gear also rubs against sensitive marine habitats or smothers them, gravely damaging seabed life, and impairing critical breeding and breeding areas. These problems have been known for at least 40 years, but little has been done. International regulations have been approved and agreements struck, but they tend to be limited or voluntary.

There is no comprehensive international legal framework to create some sort of order. 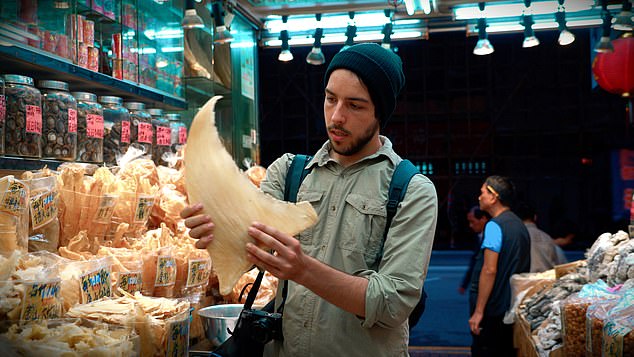 Viewers have reported being driven to tears, ‘destroyed’ and ‘heartbroken’ by what they have seen. Many have sworn to stop eating fish, as urged by the film. Celebrities and some leading greens have applauded it

Therefore, Seaspiracy has done well to highlight this neglected issue. It is also right to focus on overfishing: at least 85 per cent of the world’s fisheries are either overexploited — severely depleting once-abundant stocks — or on the verge of being so.

Above all, it exposes an increasingly common distraction tactic by industries, to try to focus problems — and their solutions — on individual behaviour by their customers, rather than on the systemic changes they need to undertake themselves.

It is much easier for the fishing industry to encourage us not to buy cotton buds rather than to stop dumping nets and lines in the oceans. By telling us what to do instead of changing its own ways, destructive industries can both avoid talking about the more transformative measures they need to take, and imply that any critic not leading a perfectly green life is a hypocrite. And, in that, it is abetted by some of the more puritanical environmentalists.

Seaspiracy admirably explodes such an approach on plastics, by focusing on the fishing industry, rather on what individuals can do. Unfortunately, however, it falls into the trap when outlining what needs to be done.

The only solution it offers with any emphasis is to stop eating fish. Indeed, it makes so much of this that some have accused it of being a vehicle for veganism — Tabrizi himself is a vegan.

Though such a personal reaction is understandable, even praiseworthy, it is no simple solution. The world will not stop eating fish, and nor should it; three billion people depend on seafood for protein and many millions depend on it for their livelihoods. So fishing will continue — as it should.

Fortunately, many other solutions are available. Ghost gear can be limited by making boats register their equipment, and return with it or be fined: if it is broken it can be recycled. Tagging it with GPS locators would also discourage dumping.

Sustainable fishing is possible, though the film goes out of its way to decry it, and stocks can bounce back. Take the Patagonian toothfish, known as ‘white gold’ in the trade — since it can fetch $100 a gram — and marketed as the more appealing ‘Chilean sea bass’. Once close to collapse, its fishery has been returned to health.

Closer to home, stopping trawling and dredging in favour of less destructive fishing in Lyme Bay, agreed between local fisherman and the Blue Marine Foundation, has brought an almost fourfold increase in the abundance of commercially valuable fish. In the last weeks, ministers banned trawling in over 304 sq km off Sussex.

Marine reserves can also make a big difference. Even ones that allow some fishing have, one study found, doubled fish biomass, while ‘no-take zones’ where fishing is banned have multiplied it more than sixfold. This even benefits fishermen by increasing their catches, as life spills out of the protected areas into waters where fishing continues.

Lobsters and king scallops have increased fourfold in a once devastated ‘no-take’ zone, established by local demand, off the Scottish Isle of Arran in 2008.

So far, less than 5 per cent of the world’s oceans are protected. This needs to increase to 30 per cent over the next decade.

A Global Ocean Treaty — to be discussed at a UN meeting in August — offers an opportunity, if done well enough, to tackle the fishing industry globally, and to protect the oceans by 2030.

The Government is alive to the crisis of the oceans. It, and its predecessors, have done well in establishing giant reserves in all of the world’s main oceans.

Now it needs to do much more in increasing reserves, promoting truly sustainable fishing worldwide, and ending pollution by discarded fishing gear.

It is a shame that Seaspiracy is failing to use its enormous impact to help bring about such changes.

But maybe now that it has sensitised so many to the problems, others can come in with the real solutions.

'I can't stay away from you': Married Alabama Secretary of State John Merrill admits affair

Dartmoor home that inspired The Hound of the Baskervilles goes on the market for £4.5million