The Island of Dolls and the Forest of Pride… 7 Ghostly Haunted Places in the World If your heart is frozen, enter them


There are many forests around the world that are famous for many ancient and modern stories, whether related to the presence of predators, rare trees or ghosts that have inhabited them for many years, and the last belief was associated with some of the forests that we review in this report, according to the website “”insider“.

Ghost haunted forests around the world

It is said that the island of Isla de las Monicas, or as it is known as the “Island of Dolls”, which is located in Mexico, has the soul of a young girl who drowned in a lake located on the island, and the legend says that the caretaker of the island hung the first doll to honor a young girl who found her drowning on the island and it was believed that The doll belonged to her, then this man felt as if the girl’s spirit was chasing him, so he continued to tie the dolls to tree branches in the hope of pleasing her, and after fifty years and put so many dolls, he was said to have drowned in the same place where the girl had drowned.

Today, the island has become a popular tourist destination, with visitors claiming that the dolls move their eyes, heads and limbs and are possessed by spirits.

The Hoya Paseo forest in Romania is characterized by no planting at all, and the forest was first known as an exotic location when a military technician photographed something he claimed was a UFO that appeared in a part of the forest in 1968.

The forest has baffled visitors, locals and even scientists for decades because of its underdeveloped trees. Tourists can tour the forest at night, although many have reported feeling a strange sense of anxiety, nausea, or the feeling that someone is watching them.

The Aokigahara Forest is known in Japan as the “Suicide Forest”, and is located on the northwest side of Mount Fuji, and the forest is sometimes referred to as the Sea of ​​Trees. , until a sign was hung at the entrance to the forest for visitors saying “Life is a precious gift” to prevent anyone from committing suicide.

The Witchwood Forest is located in Oxfordshire, England, and is one of the forests believed to be inhabited by many ghosts, although there is no single historical event to confirm this, but some of those who entered the forest claimed that they saw some strange things, as some claimed the ghost story of Amy Robsart, wife The Earl of Leicester, who died in mysterious circumstances of a broken neck, her husband was said to have encountered her ghost while hunting in the woods, and the ghost told him that he would die within 10 days and he was. 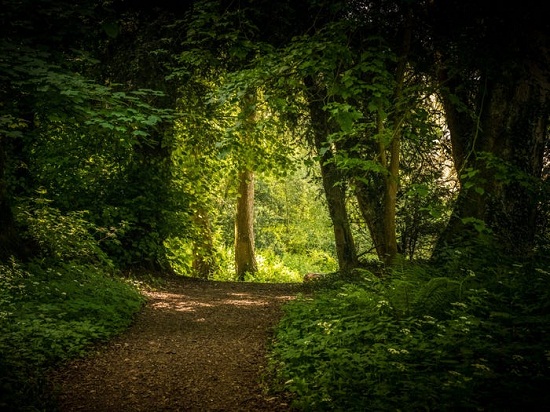 The Black Forest in Germany has inspired stories written by the Brothers Grimm, and there are many stories and fairy tales associated with the forest, including that it is home to supernatural creatures ranging from witches to werewolves.

Visitors have reported ghosts and paranormal occurrences in the Elvin Forest, located in Escondido, California. The forest is believed to have once been home to Native American tribes, as evidenced by a number of artifacts found there, and was also the site of a now abandoned mental health hospital. .

But the most common story about the forest is about the gypsies who lived there in the early 19th century being driven out and killed even by the townspeople, causing the remaining gypsies to curse the forest, and since then, hikers and visitors have reported seeing a ghostly woman in a white dress. Bleeding trees, and a soul riding a horse.

Dow Hills Victoria School for Boys is surrounded by Dow Hill Forest, which is said to be one of the most ghost-haunted places in India, where the school corridors are said to be filled with the sound of footsteps even when it is closed for vacation, and rumor has it that it witnessed multiple murders, lumberjacks have reported On seeing a headless boy walking along Death Road, the path that runs between school and the woods.

Singer Adele gave fans a glimpse of the $9.5 million mansion she lives in in Los Angeles, while participating...

Pink is one of the basic colors in a wardrobe, as it is combined with other colors to bring...

Body language is a powerful and effective way to communicate messages in a subtle way, and in fact, it...

The role that smartphones play in our lives is huge considering that the average person spends more than 4...

How to make crunchy chicken like shops in simple steps

Crispy chicken is one of the favorite meals of many children, and mothers try to cook it in different...

Does exercise and diet prevent you from getting the corona vaccine?