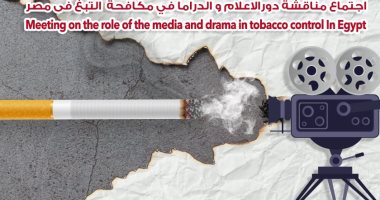 Today, Wednesday, the World Health Organization held a conference to discuss the role of media and drama in combating smoking, in cooperation with the Ministry of Health and Population, and with the participation of the Anti-Smoking, Tuberculosis and Chest Diseases Association.

The meeting aims to shed light on the health and economic risks of tobacco products, and how the media and drama can positively affect tobacco consumption rates, especially among young people.

Dr. Essam El-Maghazi, President of the Anti-Smoking, Tuberculosis and Chest Diseases Association, said that the rate of tobacco consumption in Egypt is among the highest in the Eastern Mediterranean Region, and throughout the world.

For her part, Dr. Naima Al-Qusair, representative of the World Health Organization in Egypt, said that the Anti-Smoking and Tobacco Society is one of the active anti-tobacco associations, explaining that the World Health Organization cooperates with the Egyptian Ministry of Health to combat smoking and communicable diseases, and studies have shown that smoking increases hospital admissions, She explained that the drama should have a role in influencing the audience in Egypt and the Arab countries, as the Egyptian drama greatly affects the citizens in the Arab countries and Egypt.

She pointed out that the smoking rate among men in Egypt is 42%, explaining that the tobacco industry spends billions of dollars on advertising to promote tobacco, attracts young people and encourages smokers to continue smoking, and reduces the harmful scientific facts resulting from the use of tobacco, and unfortunately the media is used to promote Its products are widely available.

She said that Egypt is one of the first countries to sign the Framework Convention on Tobacco Control.

The conference discussed how the Egyptian media and drama can contribute to the fight against tobacco in its various products, with the participation of Dr. Sahar Labib, Director of the Anti-Smoking Department at the Ministry of Health and Population, Khaled Mahmoud, art critic, Akram Al-Najjar, screenwriter, director Mohamed Fadel, artist Nihal Anbar, artist Tarek El-Desouky and Mohamed Abu Daoud.

Former Liverpool player Saunders: Messi and Ronaldo are not as good as Mohamed Salah now

Ajax, Sheriff and Liverpool are the leaders.. Find out the Champions League group standings

Ajax, Sheriff and Liverpool are the leaders.. Find out the Champions League group standings