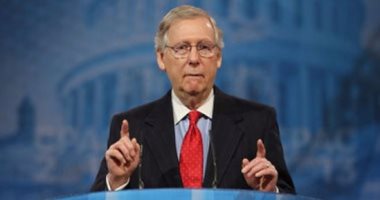 Mitch McConnell, the Republican majority leader in the Senate in the US Congress, congratulated today, Tuesday, Democratic US President-elect Joe Biden and Vice President Kamala Harris, in recognition of their first victory in the last elections that took place early last November.
McConnell said in statements to him today, “The Electoral College has said his word, so I want to congratulate President-elect Joe Biden, who is no stranger to the Senate, as he has dedicated himself to public work many years ago.”
McConnell added, “Many of us had hoped that the presidential elections would lead to different results, but our ruling system has procedural criteria that determine who will take the oath on the day of the president’s inauguration on January 20 next.”
McConnell also praised Harris as Biden’s deputy, saying, “Americans can be proud that their country has a woman holding the position of vice president of the United States for the first time ever.”
The statements of the Republican majority leader in the Senate came a day after the electoral college officially approved Biden’s victory, and after the growing number of Republican senators who recognized Biden as president-elect, and McConnell had refused to respond to questions on Monday about Biden’s status.