The moment of detonation of 3 giant concrete chimneys in a power station in America .. Video 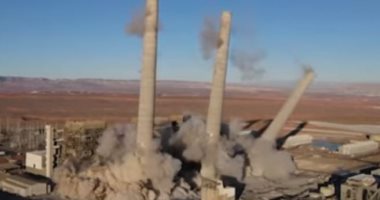 Video footage showed the moment of the explosion and collapse of 3 high-rise concrete chimneys at a power station in the state of Arizona, USA.On Demand NewsOn YouTube, he posted a video of the three chimneys collapsing, indicating that they were reaching a height 236 Meters and is located in one of the largest coal-fired power stations in the American West, according to Sputnik.

The power plant in the US state of Arizona closed last year, as natural gas became a cheaper alternative to meet the energy needs in the region, after advocates of environmental protection demanded the closure of the plant due to its reliance on fossil fuels and large quantities of water, as it burned about 24 thousand tons of coal per day since Nearly 50 years old.

Earlier, local authorities in Detroit, USA, detonated a 100-year-old electric power plant by detonating it from a distance, and Russia Today stated that the station, which worked with coal, was initially operated in 1915, and was closed in 2008.

The local authorities indicated that the plant’s lands would be used as a parking lot for four-wheel drive cars produced at the neighboring Fiat Chrysler plant.

In another collapse, aerial footage showed the moment of the collapse of a radio telescope in the Arecibo Observatory in Puerto Rico, in the United States, which was classified as the largest in the world until 2016 when China began operating a larger telescope, and it transmitted aerial views from different angles from the moment the huge telescope collapsed. On the ground, without knowing the main reason for the fall of the radio telescope at the Arecibo observatory.

And a radio telescope collapsed at the Arecibo Observatory in Puerto Rico, where it was classified as the largest in the world until 2016 when China began operating a larger telescope, and an investigation is underway to find out the cause of the collapse.

Lebanese diplomatic sources told Al-Gomhoria: We have not received any communication from Damascus about the fire