The Netherlands team leads Montenegro with Depay’s goal in the first half.. Video 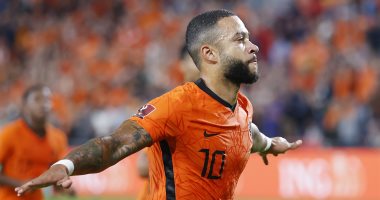 The Dutch national team ended the first half of its match against Montenegro, with a clean goal, during the meeting between the two teams currently at the “Philips” stadium in Eindhoven, in the fifth round of Group G in the group stage of the European qualifiers for the 2022 World Cup in Qatar.

The only goal came in the 38th minute through Barcelona star Memphis Depay from a penalty kick.

The Netherlands is in second place in the group standings with 7 points, after the last draw against Norway with a goal each, which is the same balance as Montenegro, who is in third place.

The Dutch team is looking for victory in order to try to continue to put pressure on Turkey, the leader with 8 points, or to take the lead in case it stumbles in the same round, but this requires the Dutch mills to focus high and fight fiercely to get the full points.

On the other hand, Montenegro occupies third place on the table, equal to the opponent with the same balance and fourth, Norway, after a draw against Turkey with two goals each in the last round.

Montenegro, which presents a good level in the qualifiers, is looking to stop the bleeding points in order to break up the partnership with the opponent and jump to the top, in the hope that the leader will fall in the same round, and this needs a great effort to achieve this.