US hospitalizations for alcoholism have risen 3.5% since 1998 – but the death rate for patients who get treated has fallen by a THIRD

The number of Americans hospitalized for alcoholism has risen over the last two decades, a new study suggests.

However, there has been a significant decrease in in-hospital mortality rates from the disorder over the past 20 years, by about one-third.

The team, from the University of Alabama at Birmingham, attributes the decreases in death to a better understanding of – and how to treat- the brain disorder that affects millions in the US. 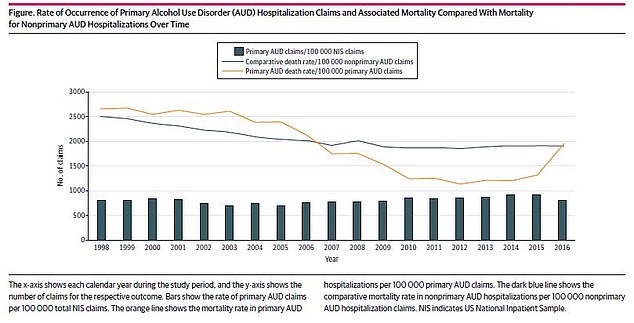 Alcohol use disorder (AUD) is a brain disorder in which people are unable to stop or control their alcohol use despite negative consequences in their personal or professional lives.

According to the National Institute on Alcohol Abuse and Alcoholism, it is estimated that 15 million American adults suffer from AUD.

Treatments for the disorder include behavioral therapies, medications and mutual-support groups such as Alcoholics Anonymous.

For the study, published in JAMA Network Open, the team analyzed medical insurance claims from the US National Inpatient Sample (NIS) database between 1998 and 2016.

Researchers looked at diagnostic codes relating to AUD as the primary reason for hospitalization.

Codes signifying drug or alcohol counseling and rehabilitation, or detoxification, were excluded from the analysis.

Over the course of the study period, there were more than 5.5 million patients hospitalized for AUD, with an average age of 48 years old.

But even as hospitalizations for the disorder increased, mortality rates decreased.

Researchers found a 25 percent and a 28 percent drop in the number of AUD hospitalization deaths and mortality rate per 100,000 total NIS claims, respectively.

That also represents a mortality rate decline from .07 percent to .05 percent.

The team says there are limitations and that the percentages could be much higher if military and Veterans Affairs data is included, due to the high number of veterans who binge-drink.

‘A better understanding of what causes these time trends could help further improve AUD hospitalization outcomes and reduce mortality.’