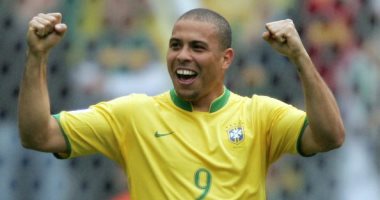 Ronaldo, the Brazilian football legend, nicknamed “The Phenomenon”, celebrates his 45th birthday today, Wednesday, as he was born 22 September 1976, and Ronaldo Nazario has two birthdays, September 18 and 22, and this is due to a strange reason, due to his exceptional footballing talent, and it seems that he deserves this title on a personal level as well..

In 2015, the Champions League account on Twitter celebrated the birthday of Ronaldo, the star of Real Madrid and Barcelona, ​​Spain, and Milan and Inter Milan, the former Italian, on September 22, and the following year the same account celebrated it on the 18th of the same month..

Also, some of the clubs that Ronaldo has played for celebrate his birthday on the 18th, and others choose the 22nd, which is the same for the player’s page on Wikipedia, as the date of his birth displayed in the English version, for example, differs from its Portuguese counterpart, and this conflict caused excitement Questions about the day Ronaldo was born.

Journalist James Mosley, author of the book “Ronaldo.. The Journey of Genius”, confirmed that the former Brazilian star was born in the northwest region of the Brazilian state of Rio de Janeiro on September 18, 1976, but his mother was not able to complete the registration procedures until 4 days later..

Because of this delay, Ronaldo has two days to celebrate his birthday, his actual birthday (September 18), and his birthday according to government papers, September 22.

Ronaldo carved his name in golden letters in the history of football, as his professional career continued between 1993 and 2011, and he was one of the most prominent stars of the golden generation of the Brazilian national team at the end of the nineties and the beginning of the current millennium.

At the age of seventeen, Ronaldo moved to Cruzeiro, Brazil, and it seems that the young striker did not need much time, as he won the Brazilian Cup in 1993 and set a record for scoring in all matches.

Then Ronaldo decided to start his journey in the old continent from the Netherlands gate, where he moved to play in PSV Eindhoven under the leadership of the legendary coach Sir Bobby Robson, and as usual Ronaldo scored in his first match in the PSV Eindhoven shirt after only 10 minutes, and Ronaldo spent in the Netherlands two seasons, he managed During which he scored 42 goals in 46 matches in the Dutch league, and scored 54 goals in 57 official matches with PSV and won the Dutch Cup and the Dutch Super Cup.

Ronaldo then moved to Spain, defending the colors of Barcelona, ​​​​in a record deal estimated at 15 million euros, compared to the youngest person who won the award for the best player in the world in the 1996 season..

One season was enough for the phenomenon, as he scored 34 goals in the Spanish League and won the King’s Cup, the Spanish Super Cup and the European Cup Winners’ Cup..

Ronaldo was named the best player in the world by FIFA and also won the Golden Ball, leaving Barca after participating in 49 matches with the Catalan team, during which he scored 47 goals in all official competitions..

Then there were some material differences between the phenomenon and the management of the Catalan club, so that the Inter club intervened and included Ronaldo in its ranks.

And then Ronaldo was on a date with the most difficult challenge, Inter Milan paid the 28 million euro buy-out clause and broke the transfer record again..

In his first season, Inter Milan lost the league to Juventus, but winning the European Cup in the 97-98 season and scoring in the final against Lazio was the best compensation for the local failure..

Ronaldo performed a miraculous performance in the football paradise that earned him the title of phenomenon, and some observers describe Ronaldo’s period at Inter Milan as the highest level a striker has ever reached in the history of football..

Ronaldo appeared in the World Cup with a strange haircut, Ronaldo wanted everyone to get busy in his new form and not talk about the injury, it seems that the ghost of 98 is still chasing him.

Brazil started the tournament amid the pessimism of the fans due to the poor performance in the qualifiers, after Brazil was close to not participating in the World Cup, which has not happened in the history of the tournament before..

Under the leadership of Ronaldo and behind him Rivaldo and the young man at the time, Ronaldinho, Brazil began the campaign to regain the title, which is far from the nominations..

Ronaldo, who lost some of his speed due to injury, appeared in the best picture, as he scored 8 goals in the tournament, including two goals against Oliver Kahn in the final crowning the Brazilian national team as the world champion. Ronaldo then won the award for the best player in the world for the third time in his career.

In the summer of 2002, the phenomenon moved to Spain, but this time to the royal team Real Madrid.

Ronaldo helped Real Madrid win the Spanish league in the 2002-03 season, win the 2002 Intercontinental Cup and the 2003 Spanish Super Cup, scoring 104 goals in 177 matches he played for Real..

Milan and the last European stop

At the beginning of 2007, Ronaldo moved to Italy, but this time from the Milan gate, to win the Club World Cup and the 2007 European Super Cup, before the injury hit him again against Livorno in the Italian League, which led to a complete rupture of the tendons of his left knee..

And then the end of the phenomenon Ronaldo was written in the old continent to return to his hometown again.

Return to Brazil and leave football

Ronaldo returned to his hometown in December 2008 from the Corinthians gate to win with them the Copa del Rey 2009 before leaving the round witch on the fourteenth of February 2011. .