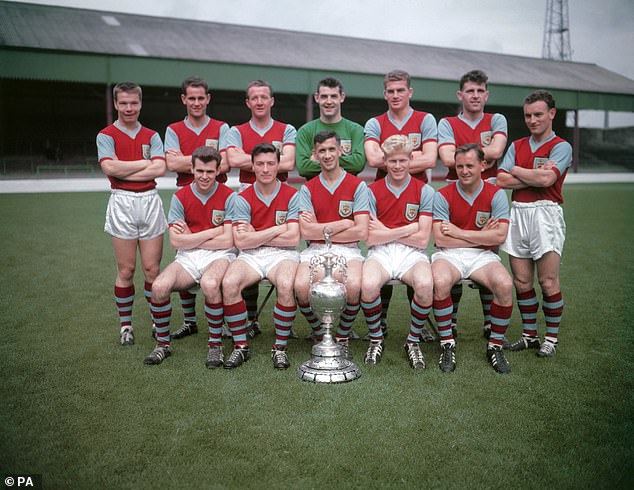 
‘The ball would disappear up in the sky and when it came down I’d head it,’ says Jimmy Robson, who pauses and adds: ‘There’s more than me that’s got this problem, you know?’

We know all too well, sadly.

This Burnley great is speaking to Sportsmail in a chat kindly arranged by his daughter, Dany, and today is a good day. Today, Jimmy remembers he was a footballer. He even remembers he has dementia.

Jimmy is explaining how for every goal-kick it was his job to flick the ball on, no matter how much it rattled his brain. ‘I’d do what needed to be done,’ he says in his softly-spoken North-East accent.

Seven players from Burnley’s 1960 First Division winning team being have been diagnosed with dementia, including Jimmy Robson (second left from back row)

It is 60 years since Burnley won the First Division and Dany suspects her father’s ability to recall details here is because of a trip to Turf Moor days ago.

‘There was a big picture of the title-winning team in the Burnley Express newspaper in May,’ Dany explains. ‘Dad was asking us, “Am I on that?” There was no recognition there. But when we took him to Turf Moor and showed him a picture of the team, he could name all of them. Being there brought it all back for him. It was amazing.’

That is the power of reminiscence and why the PFA should be helping to fund and arrange social events where former professional players can come together, perhaps at their old stomping grounds. It triggers memories and days after his visit to Turf Moor it is heart-warming to hear Jimmy discuss his old friends — men he clearly held in high regard and misses.

Notably, he does not mind saying of Alzheimer’s: ‘It is a football disease.’ The numbers back him up, too.

Of the Burnley team who won the 1959-60 title, seven have been diagnosed with dementia, Jimmy included. Six have passed away, including Jimmy McIlroy and Ray Pointer. Mention of their names sets Dany’s dad on a trip down memory lane.

‘Jimmy McIlroy was the best player we had,’ says this wonderfully warm 81-year-old. ‘He was top notch. He took our penalties and he’d score goals. Him and Jimmy Adamson used to work wonderfully in the midfield.

‘My job was to score goals. I used to play up front with Ray Pointer and we scored lots of goals between us. John Connelly, too. Burnley were a good side.’

Sometimes with dementia you either have to laugh or cry and one remark from her dad had Dany chuckling recently. Jimmy was asked about Sir Bobby Charlton’s diagnosis, the death of Nobby Stiles and the fact that many of his old Burnley team-mates had it. To which he replied: ‘It makes me very sad because I might end up getting it, too.’

Unfortunately, it is too late for that. Jimmy was diagnosed with dementia almost five years ago. It started with forgetting where he parked his car in Burnley town centre and escalated from there.

Thankfully, Dany adds, her father is a ‘happy’ person. Whereas some of those diagnosed can develop nasty streaks, Jimmy has retained his cheeky nature.

‘Burnley were playing Manchester City in the Premier League a couple of years ago and it was by beating City in 1960 that Burnley won the title,’ Dany says. ‘So Sky Sports did an interview with my dad and Trevor Meredith talking about that time. Trevor was saying my dad was always the joker in the dressing room.

Six of his team-mates, including Ray Pointer (centre) have passed away from the illness

‘My dad has always had that personality. It was always a worry that the dementia could turn him into something else but he’s kept that side to him. We’re lucky in that respect whereas others aren’t.

‘We have a laugh. We try to keep it light because that’s the type of family we are and the type of person my dad is. He is aware (that he has dementia). He is aware he can’t remember things.

‘The other day he asked me, “What’s Covid?” Sometimes he’ll say, “I’ve gone doolally!” Or, “I don’t know what’s going on in my life.” But it’s all very light-hearted.’

Following her dad’s diagnosis, Dany spoke to the PFA who sent her a leaflet. ‘That’s it,’ she says. ‘It wasn’t Alzheimer’s specific so it didn’t help a lot. But when I rang the Alzheimer’s Society they sent me about 10 booklets about all the different types of dementia.

‘They ring me once every couple of months to ask how my dad is and, nicely, they ask how we are as a family. That makes you feel as if somebody is looking out for you.’

The PFA did contact Dany this week after a Sky News report on her father’s difficulties and the plight of the heroes of 1960.

Jimmy was born in Pelton, a village in County Durham, but was picked up by Burnley at the age of 15. Arriving in Lancashire to the sight of chimneys and mills, he feared he’d made a mistake, and longed for home.

Thankfully for Burnley, he stayed put. In one 8-0 demolition of Nottingham Forest in 1959, he scored five times, though Jimmy cannot recall that game now. He can remember scoring the 100th FA Cup final goal at Wembley Stadium in 1962, however, and how the cross came from Gordon Harris.

Jimmy even juggled football with working down the pit at Bank Hall as an electrician. Along with Connelly, Adam Blacklaw, John Angus and others, having a trade ensured they avoided national service.

‘Coming from the North-East, my grandad was a coal miner,’ says Dany. ‘He died from coal dust. We were thinking about the miners’ union the other day. They were so strong and got compensation. The PFA are probably fearing the worst.’

His daughter Dany said she had reached out to the PFA, led by chief executive Gordon Taylor, but that she was only sent a leaflet

Dany says money is not the top priority of families of former footballers diagnosed with dementia. What they want most is support, some recognition and for professional players nowadays to know the dangers of heading the ball.

‘There’s no cure for our dads,’ she says. ‘It’s about getting help and raising awareness. It’s about helping the generations to come. It’s about having support. Dad was a footballer and you end up going to the Alzheimer’s Society rather than football to help him. It’s hard to know what to do.’

I ask Jimmy whether it saddens him, like it does us, to see so many footballing icons struggling with dementia, from Sir Bobby to himself.

‘Bobby Charlton is an icon,’ he replies. ‘I am not an icon.’ He turns to Dany and smiles. ‘I’ve got my family here. They are very good to me. I’m doing all right.’

As COVID-19 rages, millennials make up growing share of 'sandwich generation,' caring for kids and parents