The Vatican said on Wednesday it had denied a request from Mike Pompeo for an audience with Pope Francis, and accused the Secretary of State of trying to drag the Catholic Church into the U.S. presidential election by denouncing its relations with China.

The extraordinary remarks from the two top diplomatic officials at the Vatican came after Pompeo accused the Church in an article and a series of tweets this month of putting its ‘moral authority’ at risk by renewing an agreement with China over the appointment of bishops.

Pompeo, who was in Rome on Wednesday and due to meet Vatican officials on Thursday, repeated his denunciations of China’s record on religious freedom at an event hosted by the U.S. embassy to the Holy See. 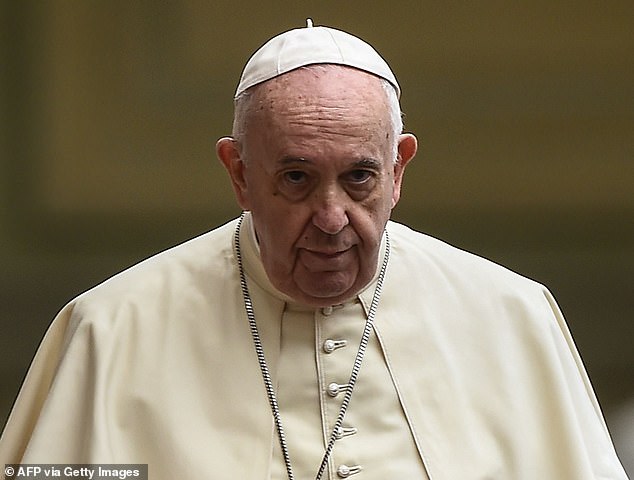 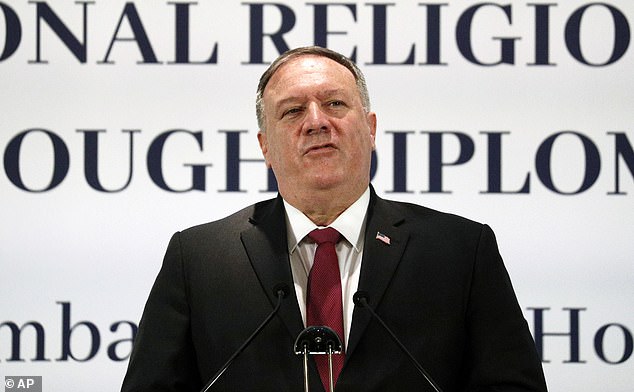 Secretary of State Mike Pompeo is currently in Rome, but the Vatican would not allow him face time with the Popo and accused him of dragging the Catholic Church into U.S. politics

The Vatican’s two top diplomats, Secretary of State Cardinal Pietro Parolin and Foreign Minister Archbishop Paul Gallagher, said Francis had declined a request from Pompeo for an audience, as the pope avoids meeting politicians ahead of elections.

‘Yes, he asked. But the pope had already said clearly that political figures are not received in election periods. That is the reason,’ Parolin said.

The Vatican’s two-year-old agreement with Beijing gives the pope some say over the appointment of Chinese bishops.

It was due to expire next month, but is expected to be renewed.

Officials in the Holy See say the agreement is not perfect but call it a step forward, after decades during which Chinese Catholics who recognise the pope were driven underground.

Parolin and Gallagher both described Pompeo’s public criticism as a ‘surprise’, coming just before his planned visit.

‘Normally when you’re preparing these visits between high-level officials, you negotiate the agenda for what you are going to talk about privately, confidentially. It’s one of the rules of diplomacy,’ Gallagher said.

Asked if he believed that Pompeo’s criticisms of the Vatican deal were intended for political use in the United States, Parolin said: ‘Some have interpreted it this way … that the comments were above all for domestic political use. I don’t have proof of this but certainly this is one way of looking at it.’

The Vatican-China deal ‘is a matter that has nothing to do with American politics. This is a matter between Churches and should not be used for this type of ends,’ Parolin said.

For his part, when asked at a briefing if he was ‘picking a fight’ with the Vatican over China and what impact that could have on Catholic and other Christian voters, Pompeo replied: ‘That’s just crazy.’

President Donald Trump has campaigned on his hard line towards China ahead of the Nov. 3 election.

He is also strongly associated with conservative Protestant and Catholic movements, many of which have been critical of Pope Francis.

In his speech on Thursday, Pompeo did not directly address the Vatican agreement with Beijing, but he described China as the world’s worst abuser of religious rights.

‘Nowhere is religious freedom under assault more than in China,’ Pompeo said. The Chinese Communist Party was looking to ‘to snuff out the lamp of freedom … on a horrifying scale’.