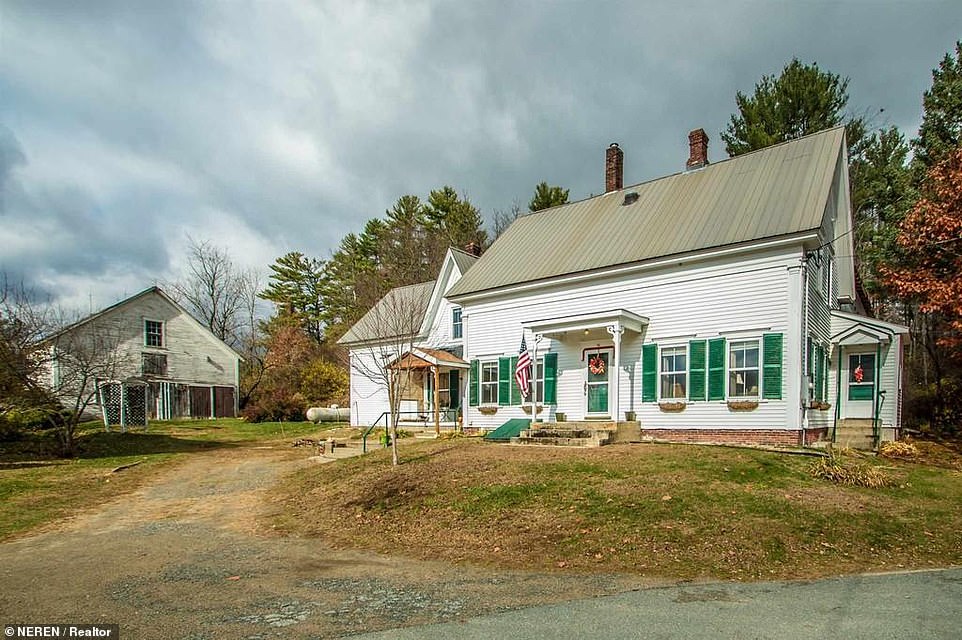 A cottage has gone on sale in Vermont with a unique cell-ing point.

The New England home comes complete with its own set of seven jail cells that would make sticking to any future lockdown a cinch.

A Vermont realtor recently placed the quaint ‘jailhouse’, based in Guildhall, near the Canadian border, on the market.

Although the jail was discontinued in 1969, the rusty cells and jailers office remain but need work to be renovated

The 2,190-square-foot, four bedroom, two bathroom home was originally a ‘jailer’s residence’ when it was built in 1878.

The cells were in use until 1969 and were a part of the Essex County Jail.

According to the property description, the cells come complete with ‘the original barred windows & the jailers office.’

‘This house was the jailer’s house, with the attached jail. Over the years, the house has been updated. It’s been a single-family home for many years, and the jail has just kind of been there,’ says the listing agent, Jennifer Allen.

The kitchen has been updated, although it retains a vintage stove that has been outfitted with modern features

‘The jail is still fully intact. It’s got the bars, it’s got everything, but it’s deteriorated, so it’s definitely not something that someone could just go in and start using it. It needs work. But it is still there and is attached to the house,’ says Allen.

Any new owner would be able to use the unique rooms perhaps as an office or maybe a room to send misbehaving children.

‘There are some historic things—like the old brick—that wouldn’t be able to be taken out, but somebody could take out the bars and turn it into living space,’ says Allen. ‘The sellers were considering making it into a big family room or gathering room that’s attached to the house.’

The listing asks prospective buyers to ‘bring your own ideas on what this 28′ x 40′ wing could be!’

‘It would be great to see somebody buy it that would want to create something out of the jail. I’d love to find a buyer that would be able to bring the jail back so it’s a usable space again,’ said Allen.

After finding freedom the four-bedroom home features more enticing features including a sheltered porch an a detached barn for ‘additional storage’ – all for an asking price of $149,000 according to Realtor.com.

From the outside, passers-by would never be able to tell what lies beneath in this old home from 1878

The vast expanse of New England countryside can. be enjoyed from the front porch of the Vermont home