The Queen wore a brooch gifted to her by Prince Philip during a visit to the Royal Navy flagship HMS Queen Elizabeth today.

Her Majesty, 95, paid tribute to her beloved husband of 73 years, who died on April 9 aged 99, by wearing the piece, which she teamed with a brick-red military-style cashmere coat for her appearance at HM Naval Base, Portsmouth.

The gold Scarab brooch, with ruby and diamond embellishments, was a 1966 gift from the Duke of Edinburgh.

She also wore the meaningful accessory in a portrait celebrating their 70th wedding anniversary in 2017. 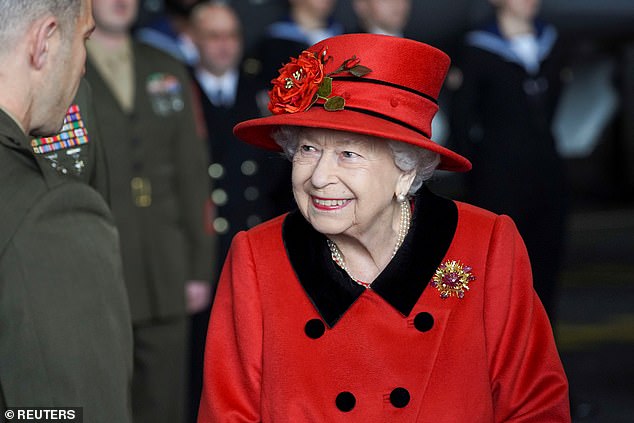 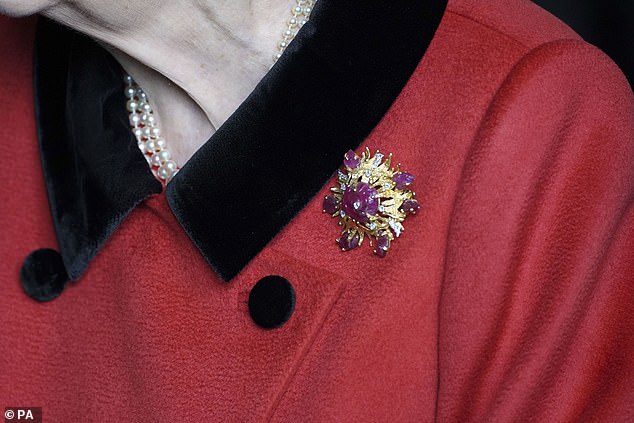 Her Majesty, 95, paid tribute to her beloved husband of 73 years, who died on April 9 aged 99, by wearing the piece (pictured), which she teamed with a brick-red military-style cashmere coat for her appearance at HM Naval Base, Portsmouth

The Queen sported a red cashmere coat with a black velvet collar and buttons, over a crepe wool dress by Stewart Parvin and a Rachel Trevor-Morgan hat.

Her brooch was designed by Andrew Grima, noted as ‘The Father of Modern Jewellery’, and given as a personal gift from the Duke to the Queen in 1966.

She was first seen wearing it during an appearance outside Bournemouth Town Hall during that year, alongside Prince Philip. Her new brooch was pinned to a cornflower blue coat.

It appears to be a favourite of the Queen’s as she’s sported it several times since then, including at the start of her Golden Jubilee tour in Falmouth in 2002.

Another special occasion in which she wore the brooch was for her appearance marking the 50th anniversary of her first televised Christmas message in December 2007. 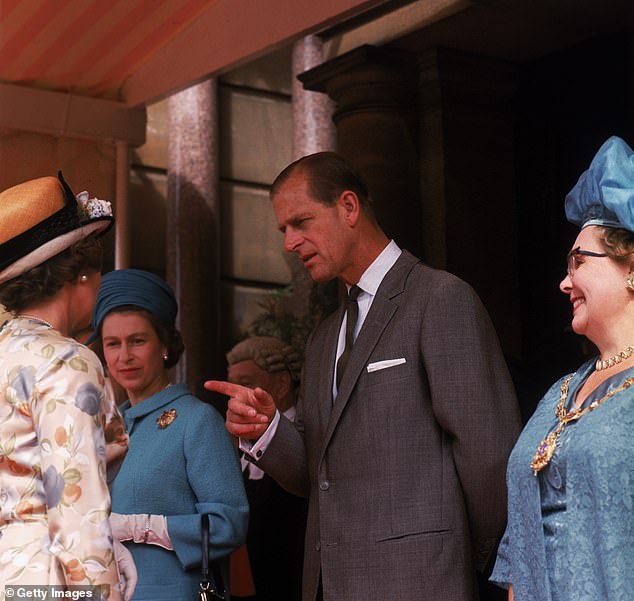 The gold Scarab brooch, with ruby and diamond embellishments, was a 1966 gift from the Duke of Edinburgh (pictured the couple together in 1966, with the Queen wearing the brooch)

Then, during a state visit to Slovenia in 2008, the Queen opted for the accessory while receiving flowers from the public.

The monarch visited the £3billion warship, which is affectionally called ‘Big Lizzie’, in a tumultuous week for the Firm which saw the Duke of Sussex, 36, drop another ‘truth bomb’ in his new Apple TV+ series with Oprah Winfrey.

The Royal Navy’s flagship vessel is set to depart for Asia later on Saturday to begin a 28-week operational deployment which will see it carry out visits to 40 countries including India, Japan, and Singapore.

Her Majesty had a chance to meet some of the 1,700 personnel on board the carrier which include Royal Navy sailors, Royal Air Force airmen and women, Royal Marines, and 250 United States personnel. 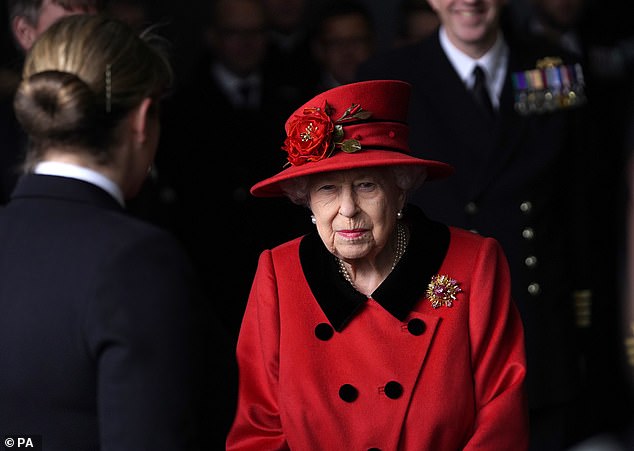 Her visit followed a tour by the Prime Minister Boris Johnson on Friday.

It is understood that the Queen is keen to recommence more public engagements in the coming months instead of the virtual events which have taken up much of her schedule since the pandemic hit.

Captain Essenhigh said: ‘It’s always a great privilege to host the Queen and to have her as both our sovereign and our lady sponsor come and wish us well as we set off on a seven-month deployment is something incredibly special.’

The Queen presented a medal for 15 years’ long service and good conduct to Petty Officer Matthew Ready, 38, from Gosport, Hampshire. He said: ‘It was an incredible honour for me and my family.’

Engineering Technician Marine Engineering (ETME) Billie Matthews, 22, from County Durham, who was one of those who met the Queen, said: ‘It was brilliant, she was very chatty, very smiley.’ 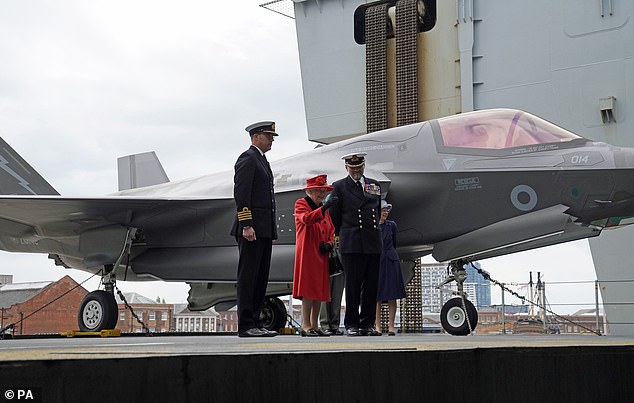 The Queen was greeted by the ship’s commanding officer Captain Angus Essenhigh, and Commodore Stephen Moorhouse (all pictured), commander of the UK Carrier Strike Group (CSG), as she arrived by helicopter at Portsmouth Naval Base 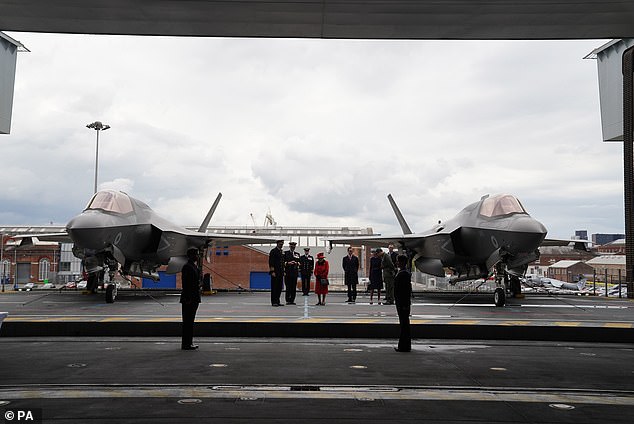 Queen Elizabeth went on to the warship’s flight deck during her tour, where she stood alongside military personnel to look at a pair of F-35B Lightning II aircrafts (pictured)

Able seaman Chelsea Paterson, 24, from Chirnside, Scotland, said: ‘It was incredible, an honour to see her, let alone speak to her, the highlight of my career.’

The Queen smiled and chatted with Royal Navy personnel on the warship soon after her grandson, 36, accused the royal family of ‘total neglect’, bullying and even a smear campaign against his wife Meghan, 39.

In his latest attack, part of a series on mental health for Apple TV+ with his friend Oprah Winfrey, the former royal suggested his father, Prince Charles, had allowed his children to ‘suffer’ when it came to the media because of his own negative experiences.

His comments came on the five-episode The Me You Can’t See series – part-televised therapy session and self-help guide, part-confessional – which was released in its entirety yesterday. It contains a number of ‘truth bombs’, an insider told the New York Post earlier this week.

In the documentary, Harry described how Meghan shared her darkest thoughts with him, including ‘the practicalities’ of how she had considered ending her life.

He said: ‘I felt completely helpless. I thought my family would help – but every single ask, request, warning, whatever it is, just got met with total silence or total neglect.’

Harry was billed as an executive producer alongside Miss Winfrey, who originally bagged the lucrative Apple deal. But it also included large segments of him in conversation with the chat show host, as well as interspersed footage of Harry at his mother’s funeral and her being chased by paparazzi as a young woman.

Decentralized Platform Can Be A Good Choice Than Traditional Policies

A 13-year-old boy in Massachusetts carried his 4-year-old sibling out a window to safety during a...