The return of masks: More commuters wear face coverings on trains and buses


More commuters appeared to be wearing face coverings on trains and buses this morning as England braced for new legal penalties under tougher Covid rules coming into force to tackle the Omicron variant.

From midnight, police will be given the power to issue people with fines of between £200 and £6,400 if face coverings are not worn on trains, buses and tubes and in shops, banks and post offices. The rules do not apply to indoor hospitality settings, such as pubs, restaurants, theatres and cinemas.

Unions have warned the current Transport for London requirement for masks to be worn was being ‘openly ignored’ on a large scale. But today most Tube passengers were seen with face coverings – although a substantial minority still went without.

In September, Network Rail found that just 20% of people were still wearing masks on trains, but this morning most passengers at Waterloo Station had their faces covered.

The situation is complicated by some train services still enforcing their own mask mandates and others deciding not to. Some passengers may also have medical exemptions.

Meanwhile, there was a mixed picture on the Newcastle Metro this morning. Last month operator Nexus warned that less than 40% of passengers were still using masks despite it being a requirement. 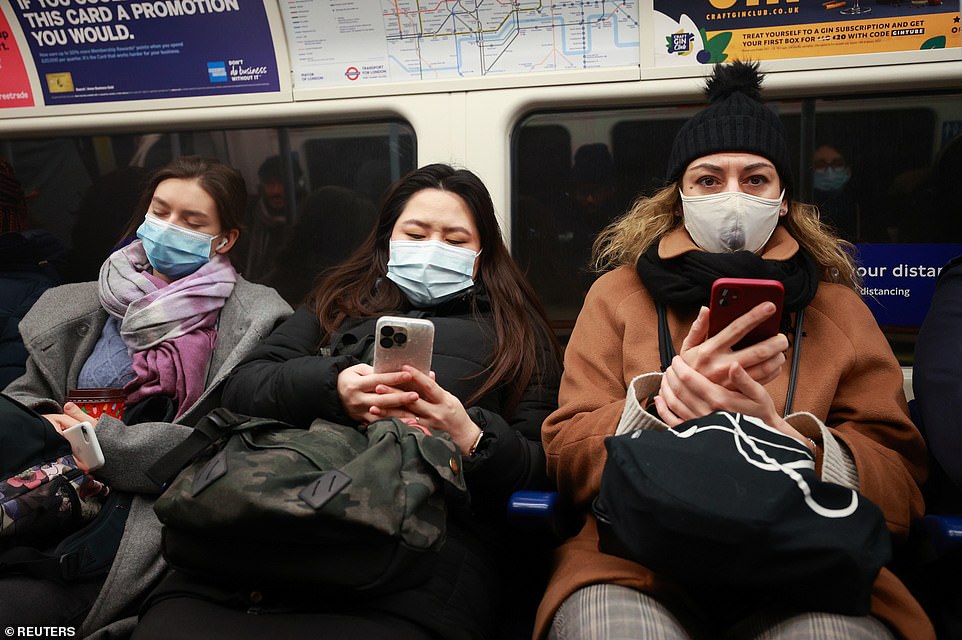 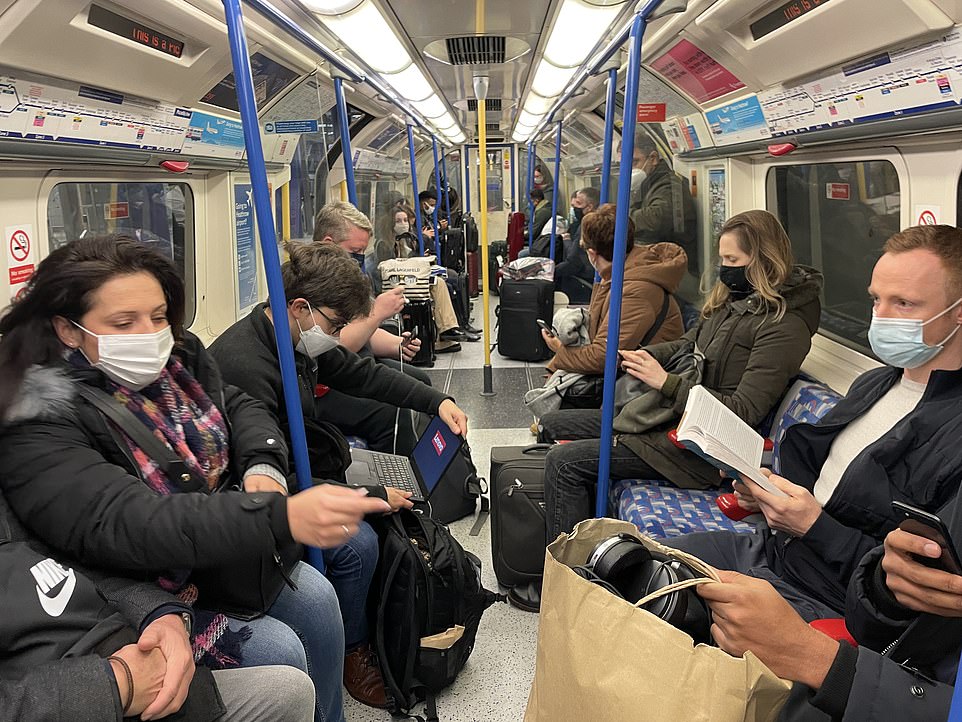 Unions have warned the current Transport for London requirement for masks to be worn was being ‘openly ignored’ on a large scale. But today pictures suggested most commuters were wearing them 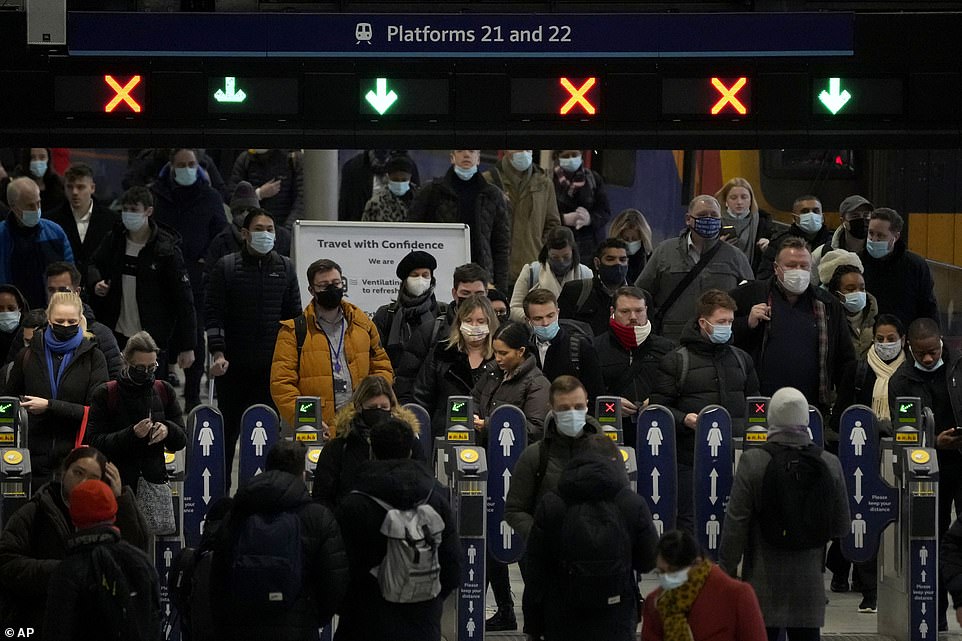 In September, Network Rail found that just 20% of people were still wearing masks on trains, but this morning most passengers at Waterloo Station had their faces covered. Those without masks may be medically exempt 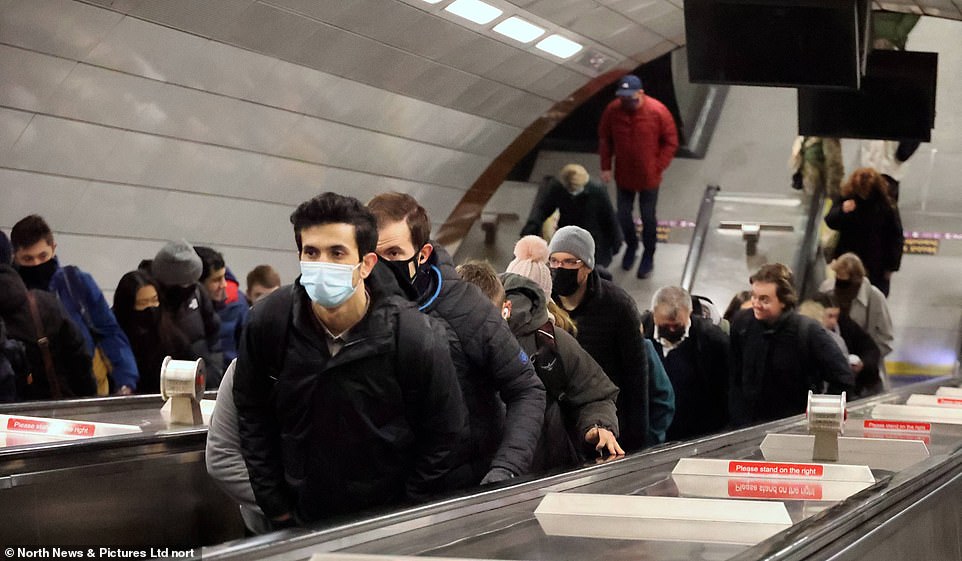 Commuters on the Metro underground train system in Newcastle city centre this morning – with some wearing masks and some not. Those without masks may be medically exempt 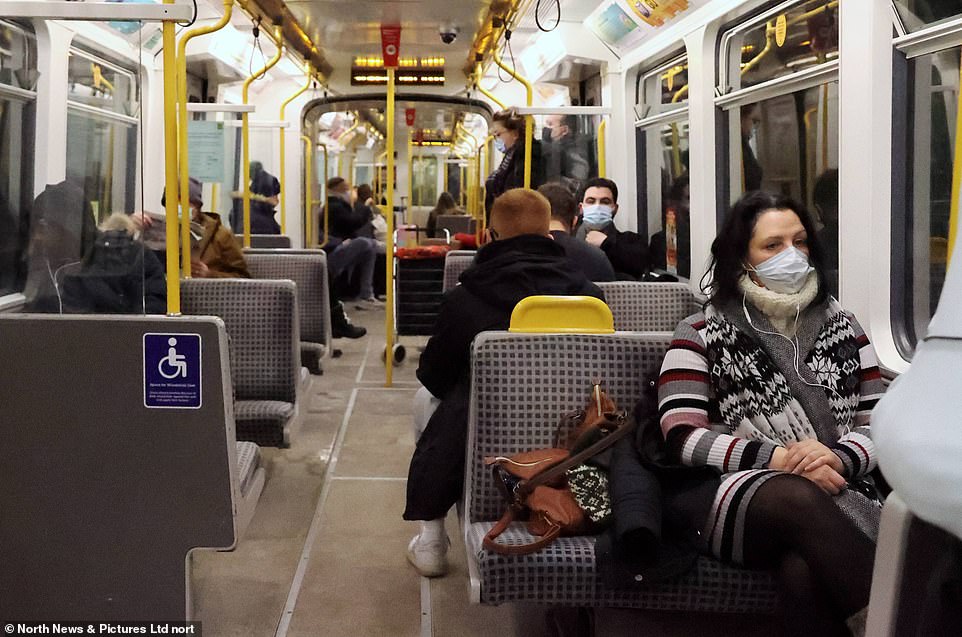 Commuters on the Newcastle Metro this morning. Masks will become mandatory on public transport again from tomorrow 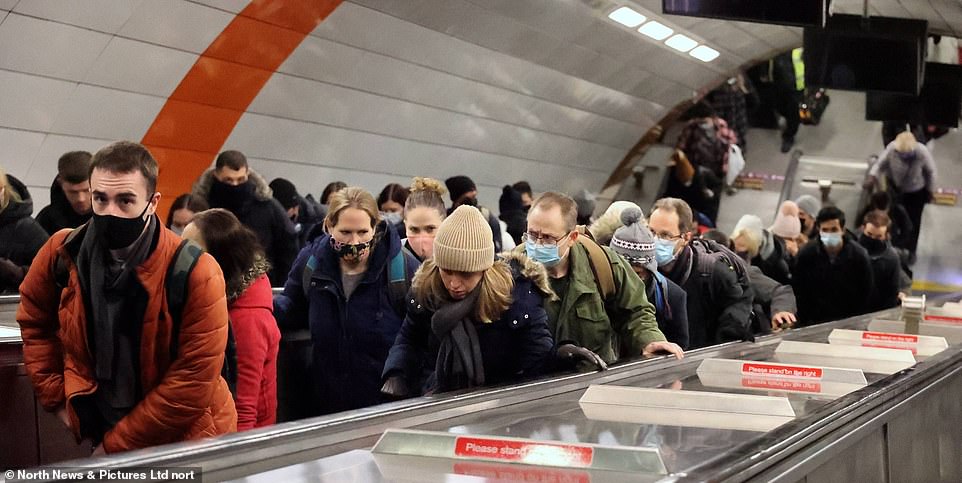 From midnight, police will be given the power to issue people with fines of between £200 and £6,400 if face coverings are not worn on trains, buses and tubes and in shops, banks and post offices (pictured are Newcastle Metro commuters) 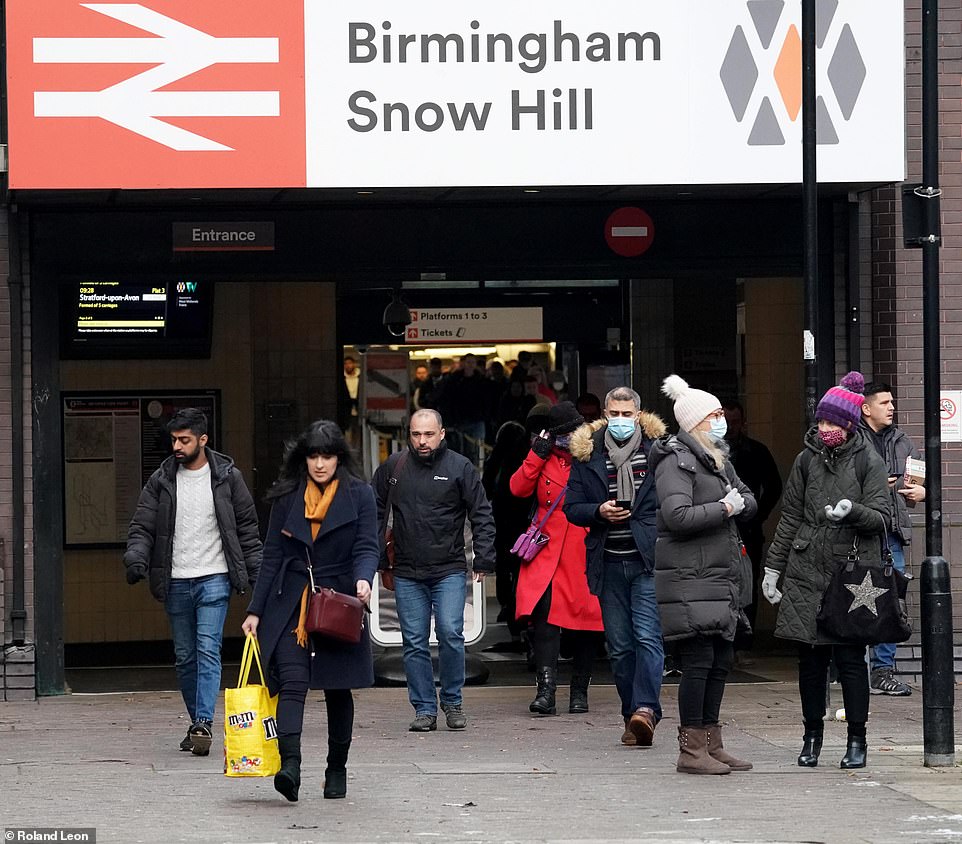 Last night Iceland managing director Richard Walker backed the reintroduction of compulsory mask wearing in shops but said it could not be left to retail staff to enforce.

By Emer Scully for MailOnline

Lockdown sceptic Tory MPs have demanded a vote on bringing back masks after Sajid Javid said MPs many not debate the move for weeks after it becomes law.

Mark Harper, chairman of the Covid Recovery Group of lockdown-sceptics Tory MPs, last night demanded that a debate and vote should be held tomorrow.

A number of backbench Tories may stage a rebellion, but it is thought unlikely Labour will oppose the restrictions, virtually guaranteeing they will pass.

The regulation change on use of face coverings will go before Parliament today and come into effect at 4am tomorrow.

But MPs do not have a vote on the measures before they are brought in because of a proceedings quirk. Mr Javid said yesterday a vote only needs to be help within 28 days, potentially weeks after the changes are made.

Mr Harper said: ‘Ministers have confirmed that they are going to lay the legislation required on Monday. I think it’s important that MPs get the chance to debate and vote on that legislation at the earliest possible opportunity.’

He told the Mail: ‘We fully support the reintroduction of compulsory face masks in shops, however we won’t be asking our store colleagues to police it.

‘Our store teams, alongside all retail workers, have shown heroic efforts in terms of ensuring safety for customers and building back consumer confidence and it’s crucial that we stay focused on the long-term recovery of the high street.

‘We need to continue to encourage people to shop in stores if they feel comfortable, and I’m hopeful that the latest guidelines won’t discourage customers from doing so.’

The British Retail Consortium said it is up to the police to enforce the measure, adding: ‘Customers are asked to respect the rules and be considerate to their fellow shoppers and to hard-working shop staff.’

The Co-op chain said: ‘As throughout the pandemic, we support our customers wearing a face covering when shopping in our stores. It’s not our place to enforce face coverings or to refuse to serve a customer who chooses not to wear one.’

Association of Convenience Stores chief executive James Lowman said: ‘We are helping retailers to prepare for the change in face covering rules, but they are extremely concerned about abuse against their staff from customers who don’t want to wear a face covering.

‘We urge all customers to be respectful towards shop workers during this time and remember they don’t set the policy, they’re just doing their job by communicating it.’

Dr Julian Tang, a clinical virologist at the University of Leicester, said: ‘We have been through all of this before with the Alpha and Delta variants. But the main difference is that the scientific evidence for the effectiveness of masks and social distancing has increased – and there is more conviction now amongst scientists that these measures do work to reduce the spread of the virus.’

A paper presented earlier this year by the Environmental Modelling Group found the proportion of Covid cases in the population linked to the virus being spread in shops, hospitality and leisure facilities was ‘relatively low’. 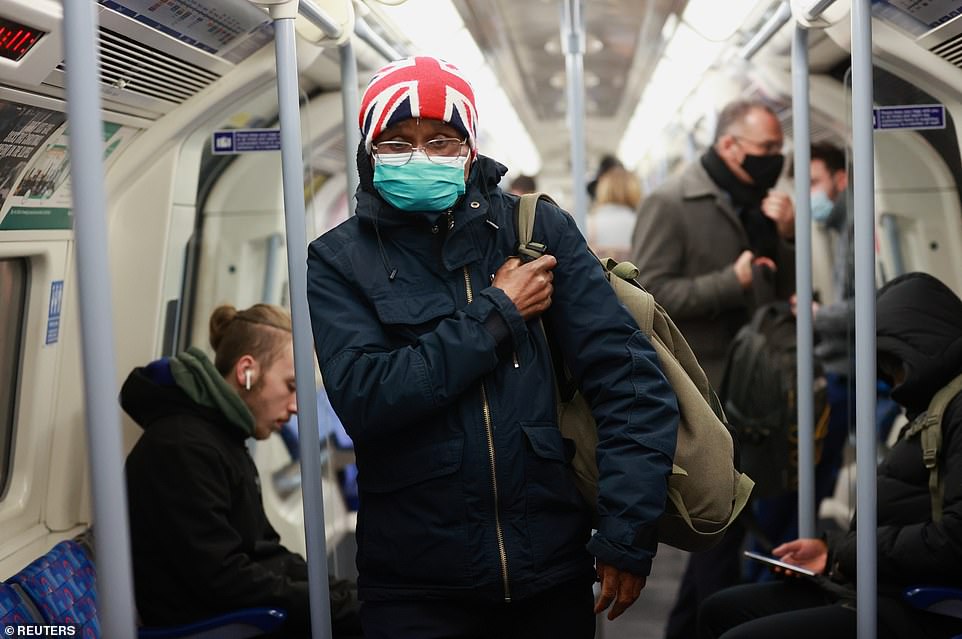 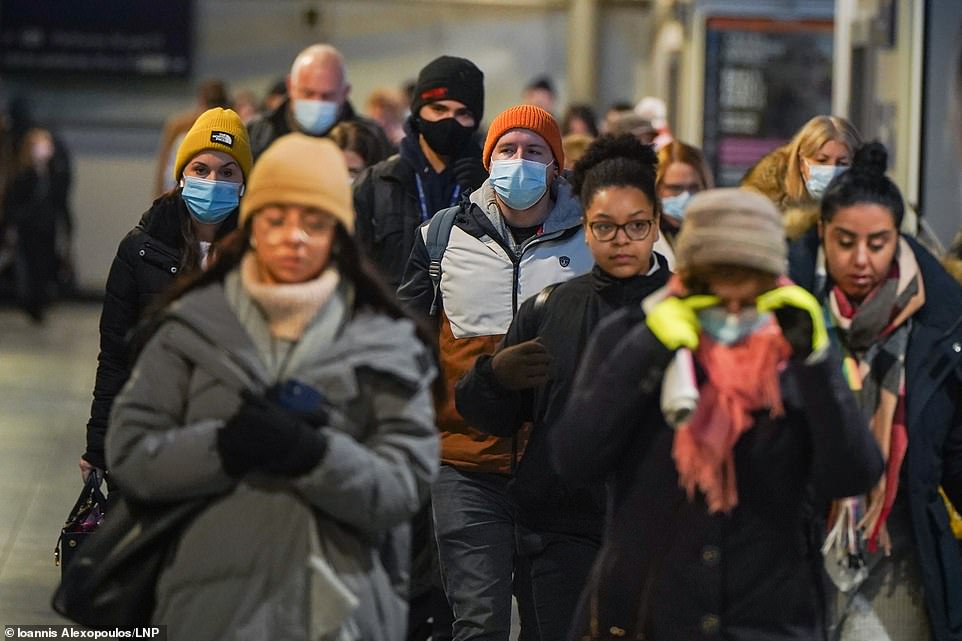 Commuters arrive at Leeds railway station today. From tomorrow, face masks will be compulsory in shops and on public transport in England 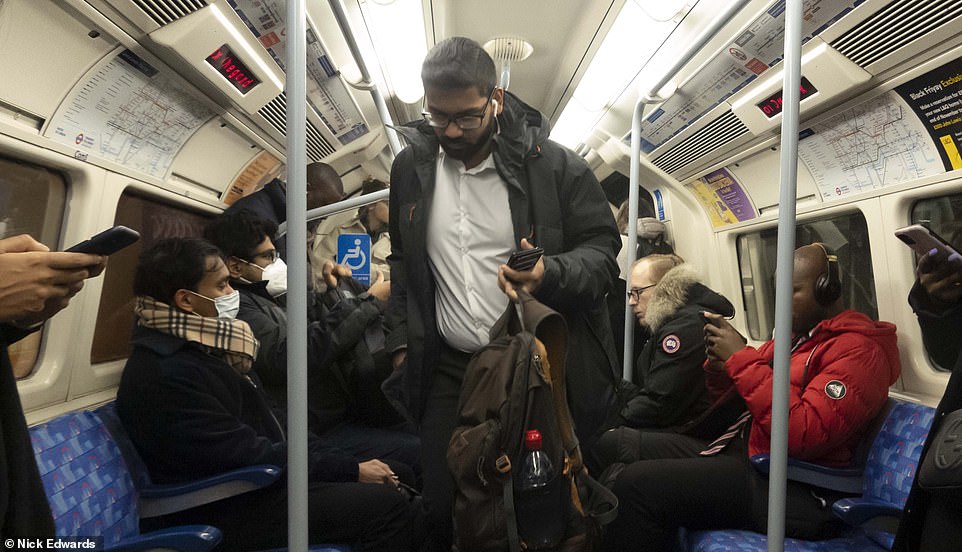 People on the London Underground Jubilee Line, where some people were shown with masks and some without. The latter may have a medical exemption 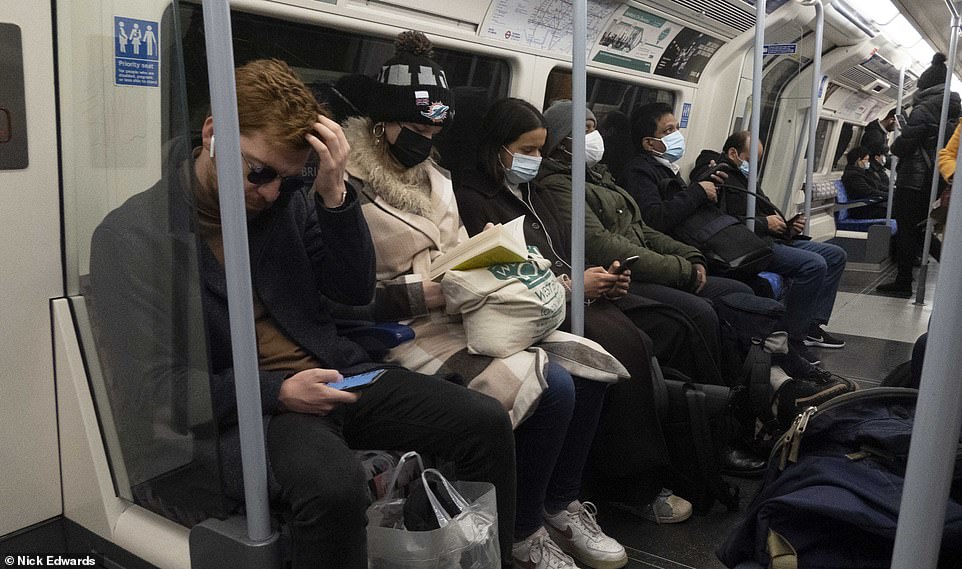 People on their early morning commute on the London Underground today, where face coverings are already mandatory (those seen without them may have an exemption)

But they still said the hospitality sector, compared to leisure and retail, appeared to be linked to a greater risk of virus transmission.

Meanwhile a global study, published earlier this month, suggests mask-wearing was linked to a 53 per cent cut in the number of Covid cases worldwide.

Education Secretary Nadhim Zahawi last night recommended that school staff, visitors and pupils in Year 7 and above should wear masks in communal areas.

Teachers in primary education and below should also follow the guidance – but not pupils, the Department for Education said. 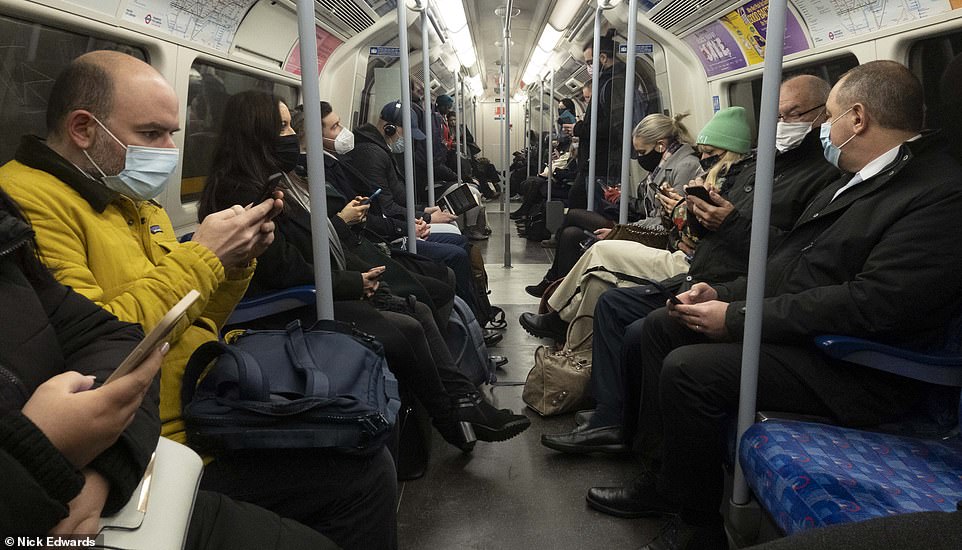 A global study, published earlier this month, suggests mask-wearing was linked to a 53 per cent cut in the number of Covid cases worldwide. Pictured: The Tube this morning 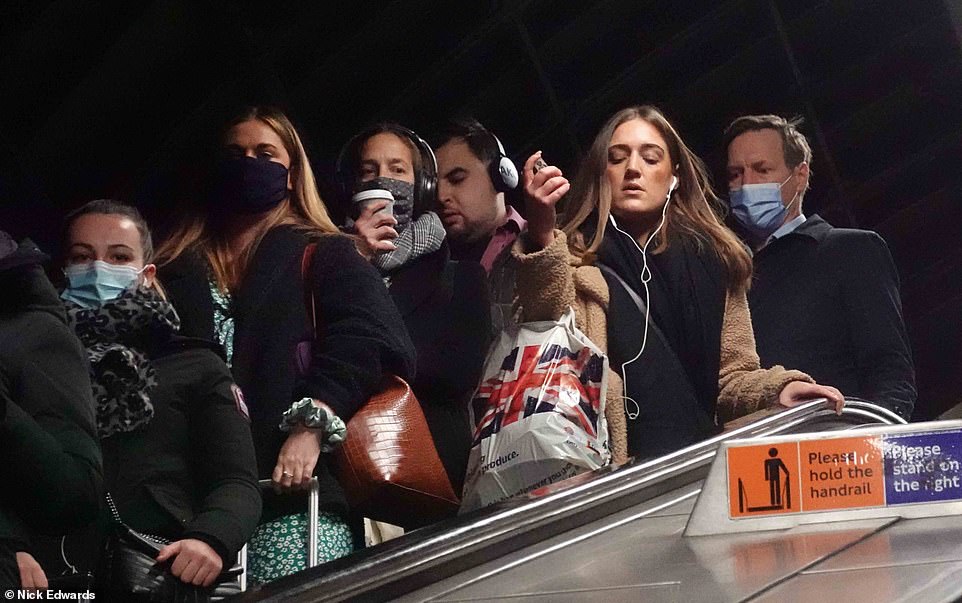 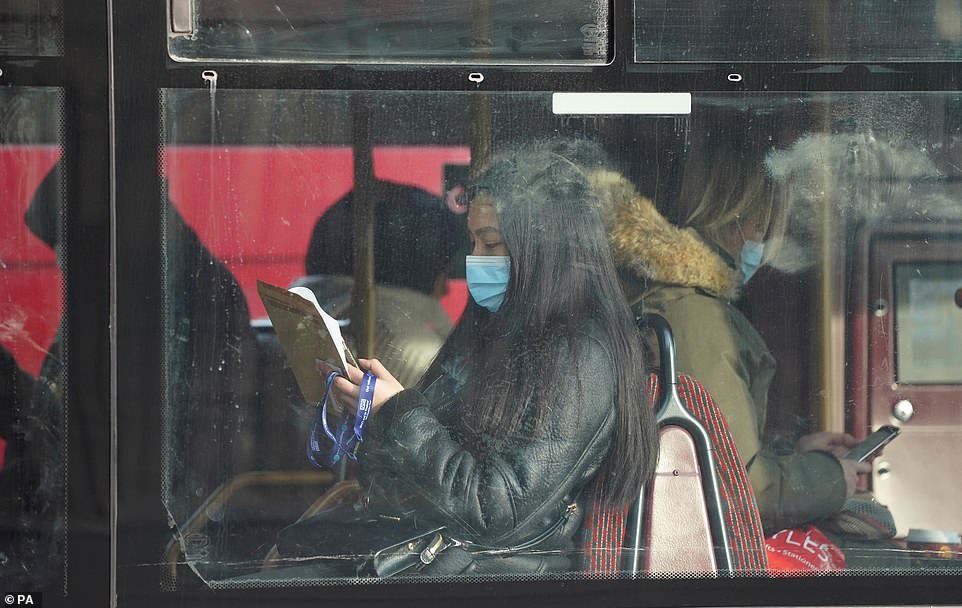 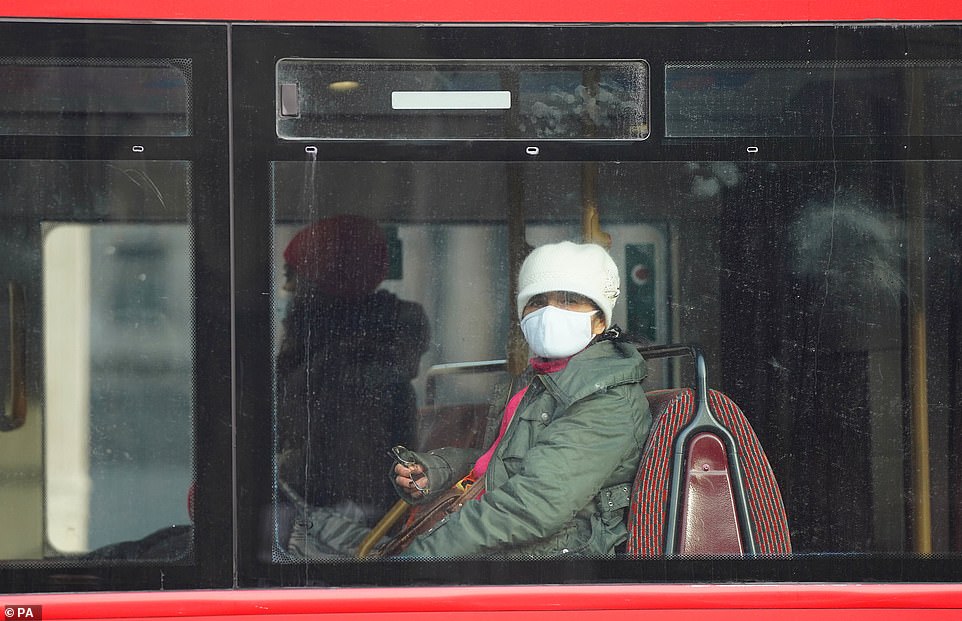 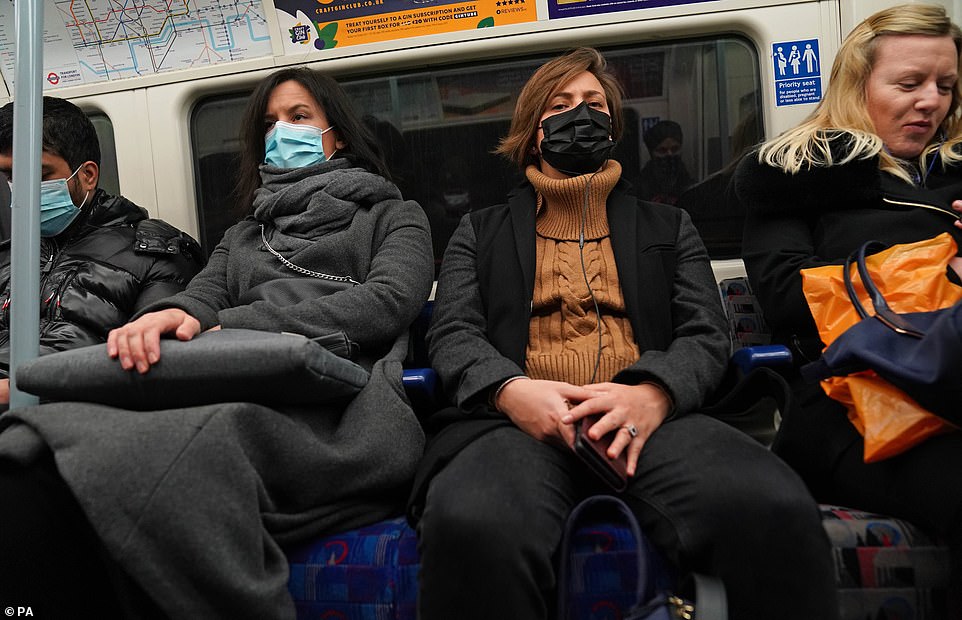 People wearing masks traveling on the London Underground this morning. People without masks may have an exemption

Dragic will be absent for a time for personal reasons