The Saudi League.. Ahmed Hegazy ignites the enthusiasm of Al Ittihad Jeddah players between the two halves of the derby 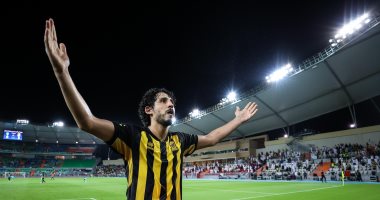 A video clip published by Al-Ittihad revealed that the Egyptian international defender, Ahmed Hegazy, ignited the team’s enthusiasm, between the two halves of the match yesterday, Friday, against Al-Ahly, during which the brigadier general won a double, in the Jeddah derby, in the match that brought the two teams together at “Prince Abdullah Stadium.” Al-Faisal, in the seventh round of the Prince Mohammed bin Salman Cup League, the “Saudi Professional League” for the current season.

And the video clip, which was published by Al-Ittihad club on its official account on the social networking site “Twitter”, showed that Hegazy, as he directed his speech to the players in the dressing room between the halves of the match, saying: “We have to pressure in our half of the court, we do not let them control us, we do not lose the ball in the half.” The stadium,” before concluding, saying, “We play calmly and think well before playing.”

Ahmed Hegazy said in statements after the end of the meeting, about the failure of Al-Ittihad to appear at a good level in the first half: “Praise be to God for the gain in the beginning, the victory was important for us and we needed the three points, after we missed two points in the last match with a tie against Al-Taawon, and the victory was No matter how big a team like Al-Ahly is in a mass derby, our performance was better in the second half, after we were equal in the first half.”

Ahmed Hegazy continued, saying: “We talked among ourselves as players between the two halves of the match and picked up their strengths. We entered the second half and translated that by winning.”

The Egyptian international concluded, saying: “The victory was important for Al-Ittihad before the international break, because any negative result would have affected the team, and Al-Ittihad will play each meeting separately to achieve its goal in the end.”

Ahmed Hegazy scored Al-Ittihad’s second goal in the match from a header in the 80th minute, after he also made Al-Ittihad’s first goal scored by Hamdan Al-Shahrani in the 50th minute.

He played 90 minutes and scored a goal

He won 3 duos and was not dribbled

With this result, Al-Ittihad regains the top spot in the Saudi League standings, with 16 points, two points ahead of Damak, the runner-up, while Al-Ahly is in thirteenth place with 5 points..

Turin vs Juventus.. Clashes between Italian police and Juve Ultras