Scores of bitter Scottish fans have revealed how they will be supporting Denmark tonight, as England look to beat the Danes and reach their first ever Euro 2020 final.

After crashing out at the group stage, Scottish fans have shunned the idea of neighbourly love and have instead turned to supporting England’s opponents in the knock-outs.

But the ‘Anyone But England’ camp have been left watching on in disappointment as Gareth Southgate‘s side continue their march towards glory with wins over Germany and Ukraine.

Now Scotland fans have rushed to show their support for the Danes, who will be hoping to spoil the party when they face England tonight at Wembley.

Former Liverpool and Scotland star turned football pundit, Graeme Souness, is among those wanting ‘Anyone But England’.

And Scottish journalist Andy Smart is also said he did not understand those north of the border siding with the Three Lions.

Meanwhile, ex-Three Lions defender Rio Ferdinand left a Scottish fan red-faced who tweeted him stick over his belief that England could win the tournament.

The former Three Lions defender retweeted a Scottish supporter message from two weeks ago calling him ‘arrogant’ for saying that England could win the tournament.

However, there has been support from some Scottish celebrities, including ITV chat show host Lorraine Kelly.

And, through gritted teeth, former Labour spin doctor Alastair Campbell – a lifelong ‘Anyone But England’ cheerleader – admitted he was backing England – but only because ‘he liked Gareth Southgate’. 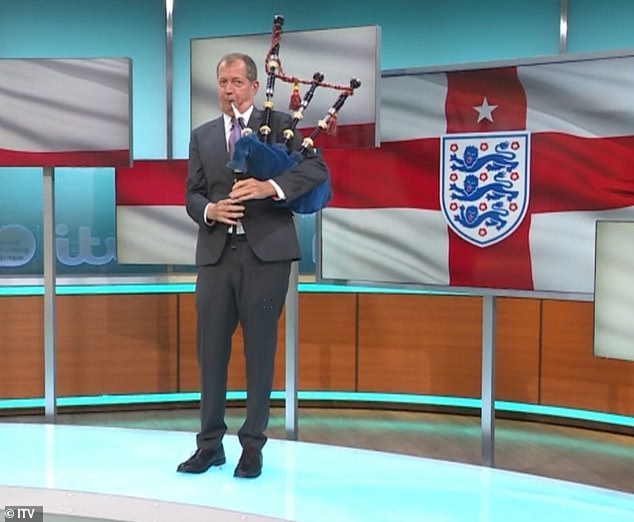 Alastair Campbell, 64, said he would be supporting England, but only because he ‘liked Gareth Southgate’, after butchering the song ‘Three Lions’ with a bag-pipe rendition on Good Morning Britain 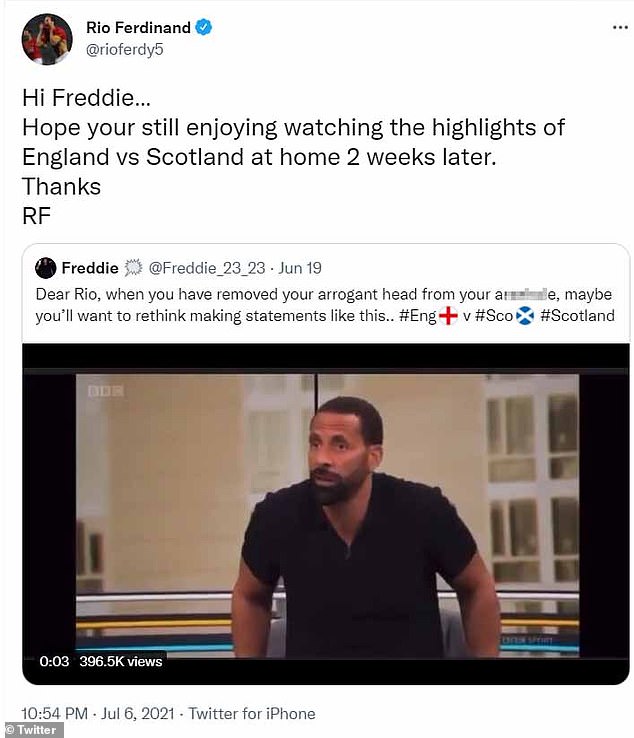 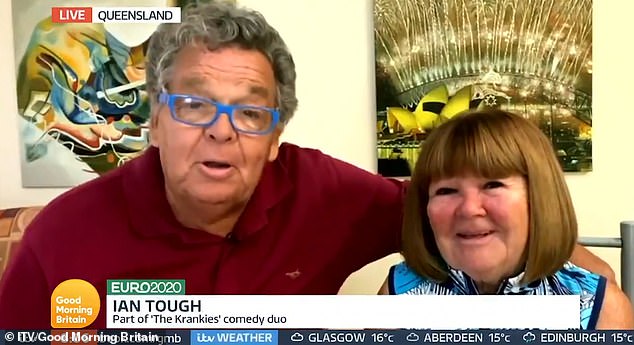 Scottish TV duo the Krankies are also backing England, telling Good Morning Britain that they are ‘British and Scottish’

The West-Yorkshire born Scot, 64, made the comment after he butchered the song ‘Three Lions’ with a bagpipe rendition on the ITV show earlier today.

As the rest of the GMB cast and production crew stood and watched, a masked Dr Hilary Jones was left covering his ears.

It came as Rio Ferdinand took on a Scottish fan on Twitter. The Scot tweeted a video of the former Manchester United and England star saying he believed the Three Lions could win Euro 2020. 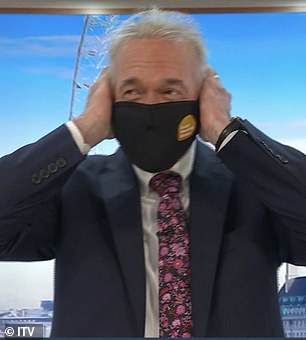 The fan, who tweeted after the England v Scotland group game last month, said: ‘Dear Rio, when you have removed your arrogant head from your a****e,  maybe you’ll want to re-think things like this.’

But yesterday the retired defender hit back, with his tweet mocking the fact that Scotland have since been knocked out of the tournament, while England remain in the hunt for the trophy.

Scottish fans had been singing the ‘Saturday Night’ by the star, real name Sannie Charlotte Carlson, during their brief Euro 2020 campaign.

The star, 51, aid: ‘We need all the support we can get. It would be ama­zing if Scots can back us at home or even in the stadium.

‘My dream is that Denmark win 2-1 and Scotland fans sing Saturday Night at Wembley again.’ 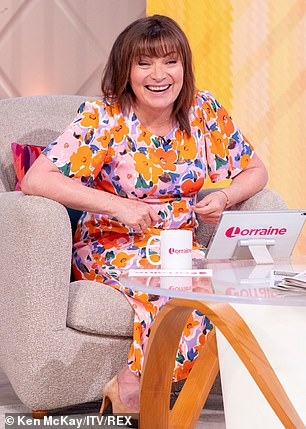 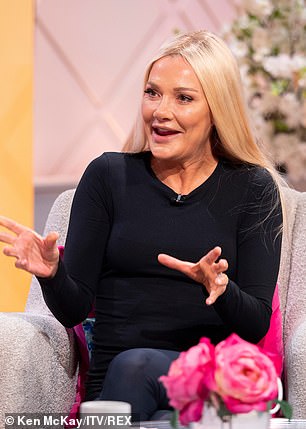 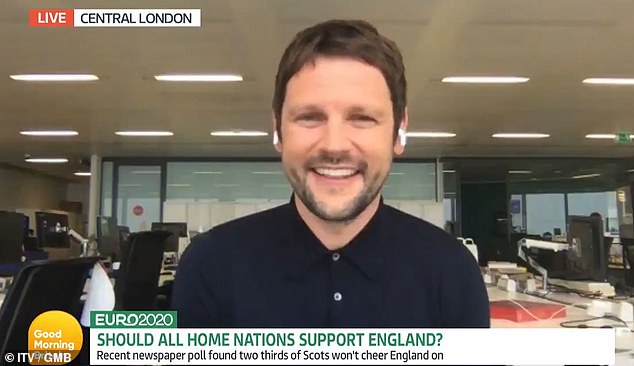 Speaking to Good Morning Britain, Smart, 41, the former editor of the Scottish Sun, said: ‘Of course we want the pain to be as severe as possible. Get through the semi-final and lose on penalties in the final, that’s the best result.’

However, the Scottish TV duo the Krankies had a different view, with Jimmy telling Good Morning Britain: ‘We are British and Scottish. I’ll stick behind Britain, whether it’s England, Ireland or Wales we are all one. It’s against the Europeans, we want to win.’

‘To be honest, Denmark is an amazing story but of course I’ll be wanting England to do well. Of course, why wouldn’t I? It’s a great thing.’

However Scottish fans on Twitter remained firmly in the ‘Anyone But England’ camp, with one saying: ‘Cmon the Danes! From Scotland.’

Another added: ‘I’ll be supporting Denmark in the England v Denmark Euro semi-final. Giving my backing to a fellow North Sea country, and a country that didn’t take Scotland’s EU citizeship away against Scotland’s will.

‘Yeah, I know, but all sport is politics.’

One Scottish fan also retweeted a picture of a young Kasper Schmeical posted by his father Peter Schmeichel – the former Denmark and Manchester United stopper. 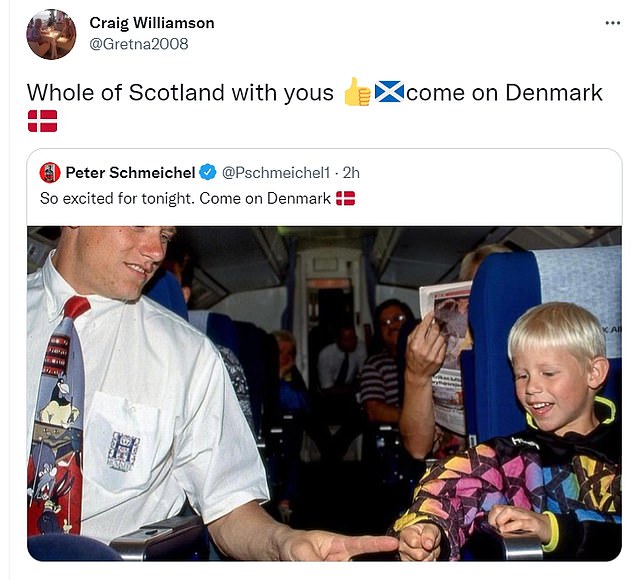 Retweeting the picture, the fan wrote: ‘Whole of Scotland is with yous. Come on Denmark.’

Another added: ‘Do this for Denmark, Scotland and the World!!!’.

And it’s not just Scottish fans that are supporting Denmark, Irish fans are too.

Irish born Stoke midfielder James McClean provoked fury from England fans when he pictured himself wearing a Germany top ahead of England’s clash with the Die Mannschaft last weekend.

And the anti-English sentiment from the Irish continued today, with Dublin Airport tweeting its support for Denmark.

In the tweet, it said: ‘We’re stilling mastering the basics, but the phrase you are looking for might be: ‘kom nu Danmark’ (Come on Denmark’ 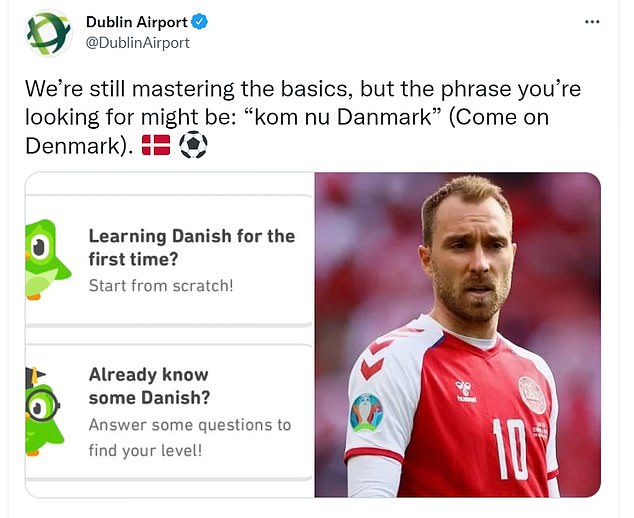 He was asked by a journalist what it would mean to ‘stop football coming home’, and replied: ‘Has it ever been home? I don’t know, have you ever won it?

As Sanofi launches its Covid vaccine by December, should you invest now?

Kohima: Britain’s ‘forgotten’ battle that changed the course of WWII

In one among his first actions in workplace, President Joe Biden ordered a pause on wall...