Princes William and Harry faced each other on opposite sides of St George’s Chapel at Prince Philip‘s funeral today, the seating plan has revealed.

The brothers were separated during the procession into the chapel and were also seated far away from each other during the service.

Prince William sat with wife Kate Middleton while Harry sat on his own – several seats away from any other guests.

It was the first time the brothers had appeared in public together in more than a year and came after months of reports that their relationship was strained after Harry and his wife Meghan Markle left the Royal Family for LA.

Harry was sat on the same side of the chapel as the Queen but they were separated by Prince Andrew, Princess Anne and her husband Vice Admiral Sir Tim Laurence.

Prince Charles sat on William’s side with the Duke of Cambridge separated from his father by Camilla, the Duchess of Cornwall, Sophie Wessex, Lady Louise, Viscount Severn and Prince Andrew. 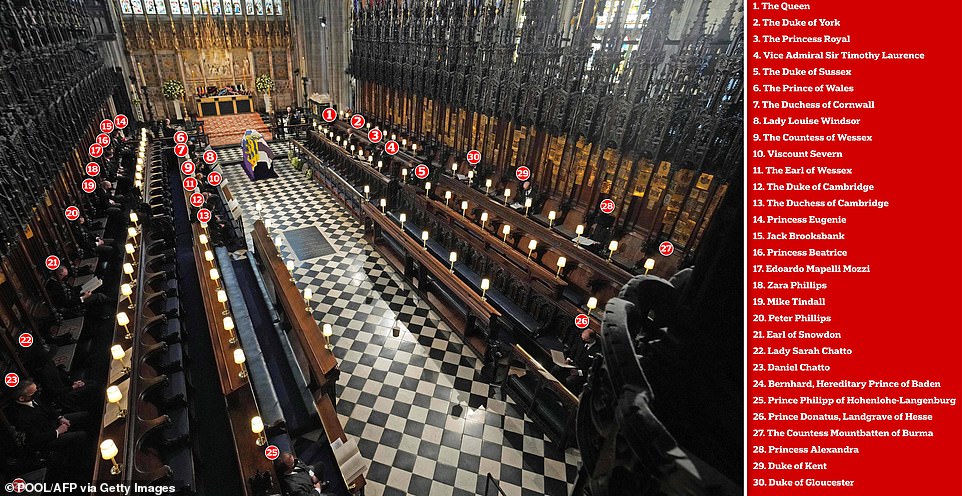 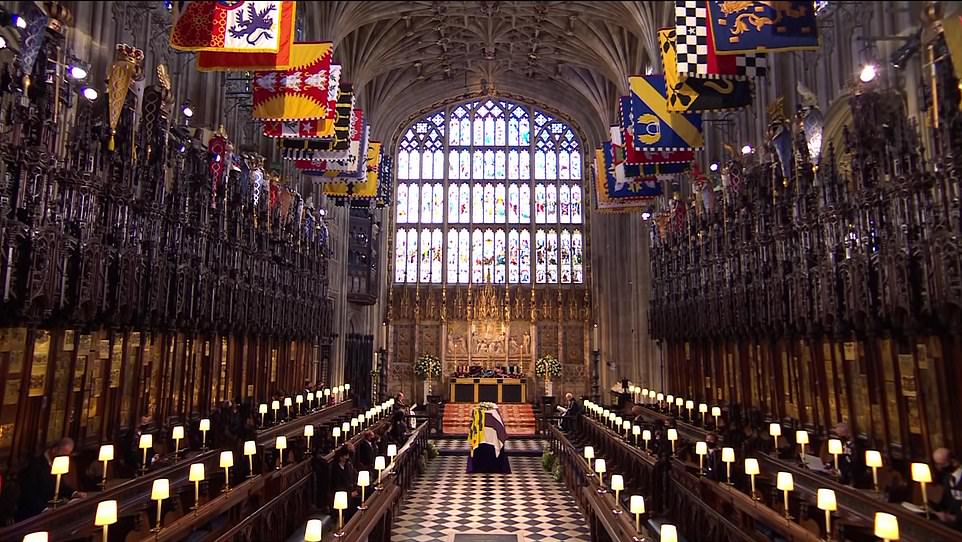 Prince Donatus, Landgrave of Hesse, sat at the far end of the chapel with Penny Brabourne, the Countess of Mountbatten of Burma, Princess Alexandra, the Duke of Kent and the Duke of Gloucester behind him.

Opposite sat Prince Phillipp of Hohenlohe-Langenburg.

The 30 mourners were made to stay in their own bubbles with significant space left between each group or person to adhere to coronavirus rules.

The Queen wiped away tears and was forced to mourn alone away from her family in St George’s Chapel during her husband’s Windsor Castle funeral.

Her Majesty looked grief-stricken and bowed her head in reverence as she accompanied her beloved Philip’s coffin on its final journey while their eldest son Prince Charles cried as he walked behind the casket into church followed by other devastated royals.

The Duke of Edinburgh’s coffin was covered in his personal standard and carried his sword, naval cap and a wreath of flowers as pallbearers placed him on to his extraordinary self-designed green Land Rover Defender hearse in the castle packed quadrangle packed with hundreds of armed personnel. 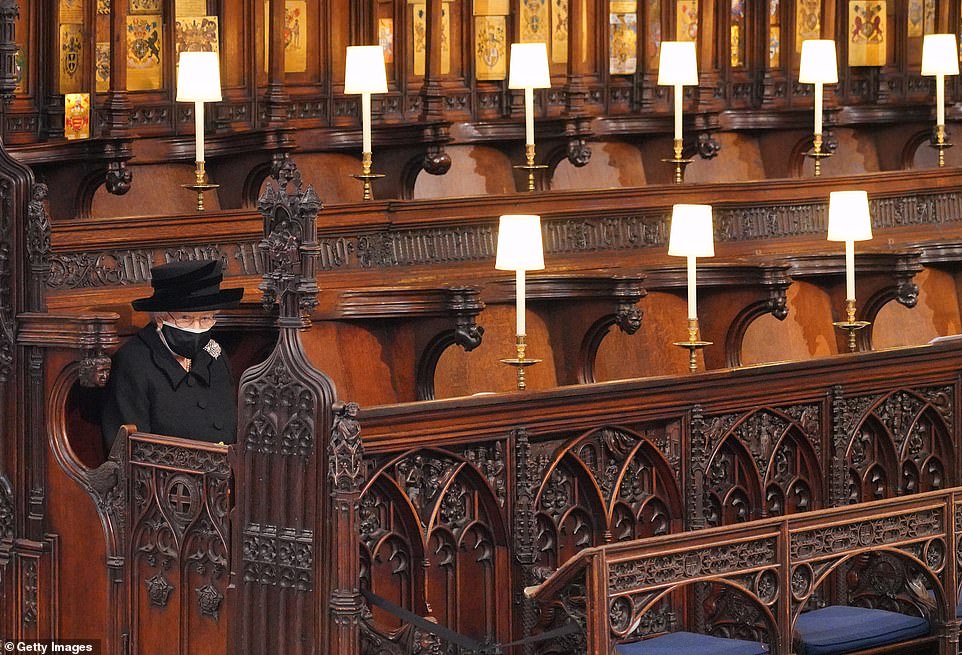 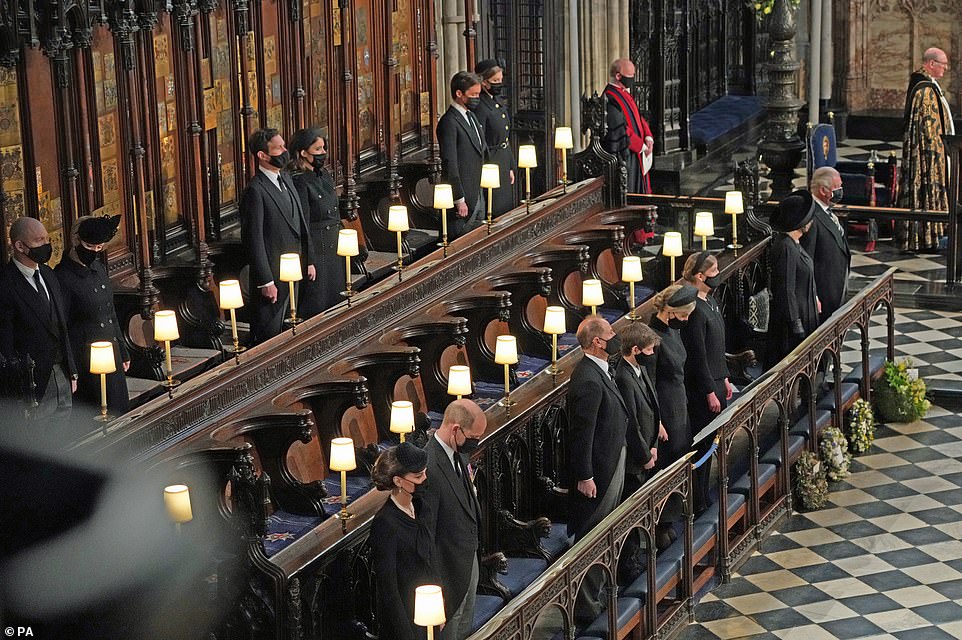 (top row, left to right) Zara and Mike Tindall, Jack Brooksbank, Princess Eugenie, Edoardo Mapelli Mozzi and Princess Eugenie, (front row, left to right) the Duchess of Cambridge, the Duke of Cambridge, the Earl of Wessex, James Viscount Severn, the Countess of Wessex, Lady Louise Windsor, the Duchess of Cornwall and the Prince of Wales during the funeral of the Duke of Edinburgh

After the eight minute procession and the 50-minute service, his coffin was lowered into the Royal Vault.

Justin Welby, the Archbishop of Canterbury, pronounced the Blessing before the 30 royal mourners silently filed out of the church into cars to take them the short journey back to castle.

Harry and William decided to walk back with Kate, the Duchess of Cambridge, and were seen smiling and speaking animatedly as they were reunited for the first time in a year where their relationship became fractured.

The emotional Queen had arrived at the funeral as the national anthem played and the royal Bentley stopped next to her beloved husband’s coffin, where she poignantly paused for a moment of reflection as cannons fired and bells tolled in remembrance of the duke. 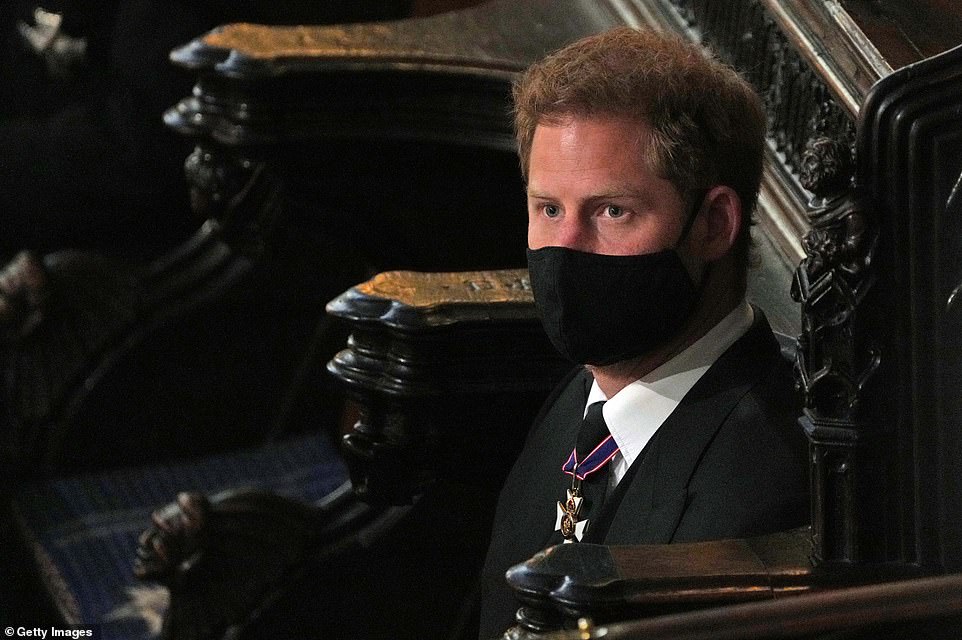 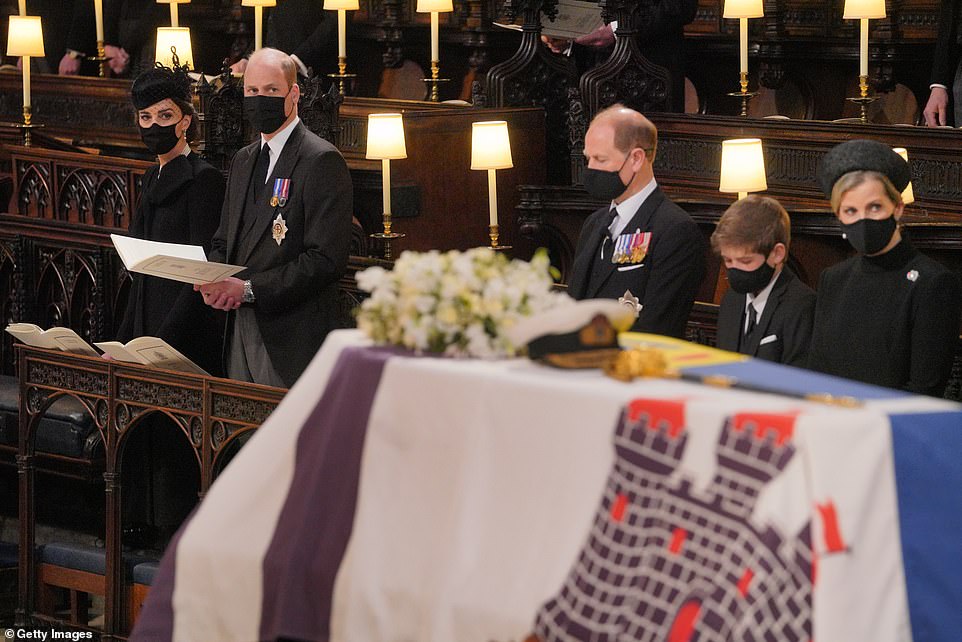 Her Majesty was then driven to St George’s Chapel with a lady in waiting Susan Hussey, before being sat alone at the front of the church where she stood and bowed her head during the national minute’s silence.

She looked at the coffin throughout the poignant service, where her children and grandchildren were on the verge of tears.

The grandchildren, including Prince William and Prince Harry, followed but the feuding brothers were separated by their cousin Peter Phillips, viewed as a ‘peacemaker’ between the two.

The Duke of Cambridge entered the chapel one place ahead of his younger brother, as the mourners filed into the historic gothic building without saying anything to each other. But they later spoke as they walked back to the castle, with Kate taking a step back to let them spend time alone.

Queen, 96, looks sprightly as she attends ‘act of loyalty’ military parade in Edinburgh

The REAL Queen of Scotland! Beaming monarch, 96, looks sprightly as she attends a military parade pledging loyalty to the monarchy - as Nicola Sturgeon gears up to...