The Secret Service storms the beaches of Cornwall for G7: Airbase is turned into a huge RV camp


US President Joe Biden is bringing so many security staff to the G7 summit they will have to stay in hired camper vans because there is not enough accommodation for all them.

More than 50 of the luxury vehicles – known as RVs – have been delivered to a RAF air base 20 miles from where the meeting of world leaders takes place at the weekend.

A 400-strong contingent of Secret Service agents and support staff are due to arrive for the summit being hosted by Boris Johnson and held in the tiny Cornish resort of Carbis Bay.

Video footage showed Osprey helicopters soaring above Cornwall and Devon as they practiced the route the President will take from Newquay Airport to Tregenna Castle Resort, St Ives, after Air Force One lands on Wednesday.

Leaders from Canada, France, Germany, Italy, Japan, the UK and the United States will come together in Cornwall this weekend because the region is seen as central to the UK’s green technology sector.

With more than 5,000 police from all over the UK providing security, and thousands of holidaymakers already in the area, almost every hotel and B&B in a 30-mile radius of Carbis Bay has been booked. More than 1,000 police will be staying on a cruise liner docked in Falmouth harbour.

The RVs – often used by celebrities when attending events such as Glastonbury – have been parked up at the St Mawgan airbase near Newquay. 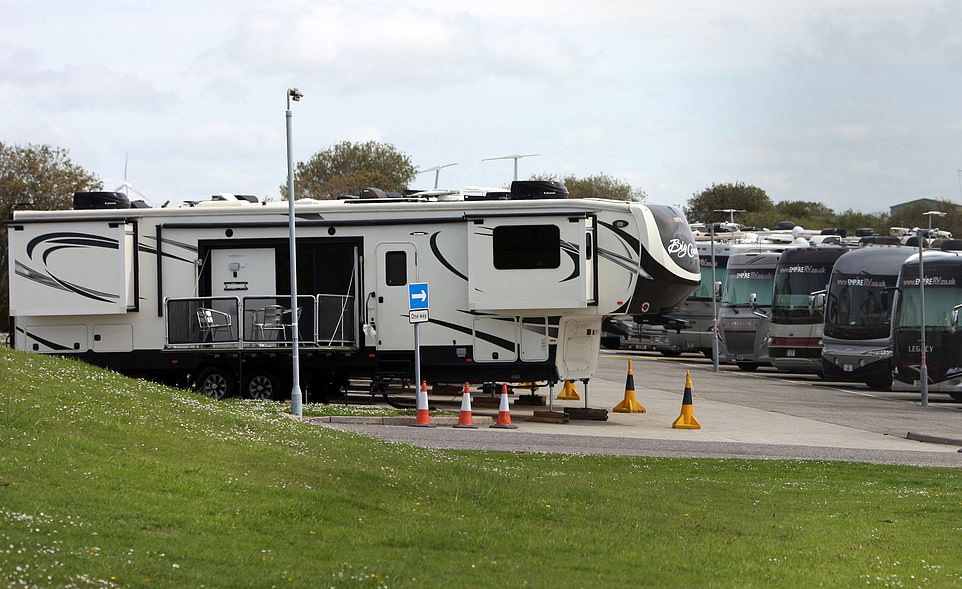 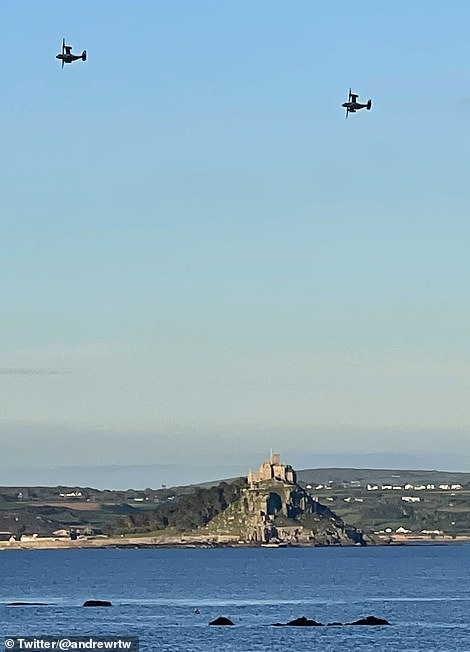 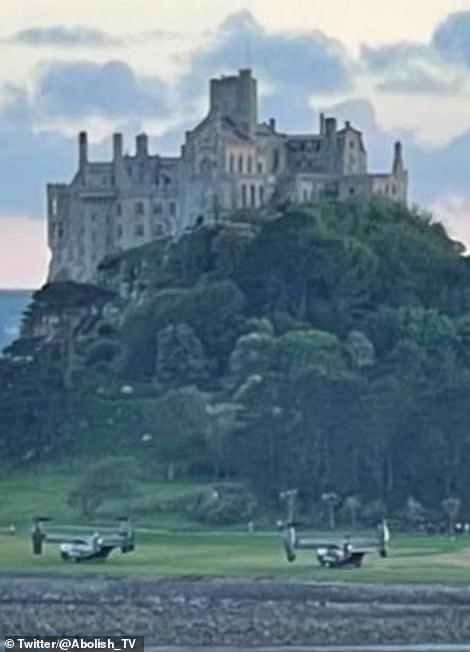 USMC Osprey helicopters, known as Marine One when the US president is onboard, are seen flying above St Michael’s Mount, left, and landing, right 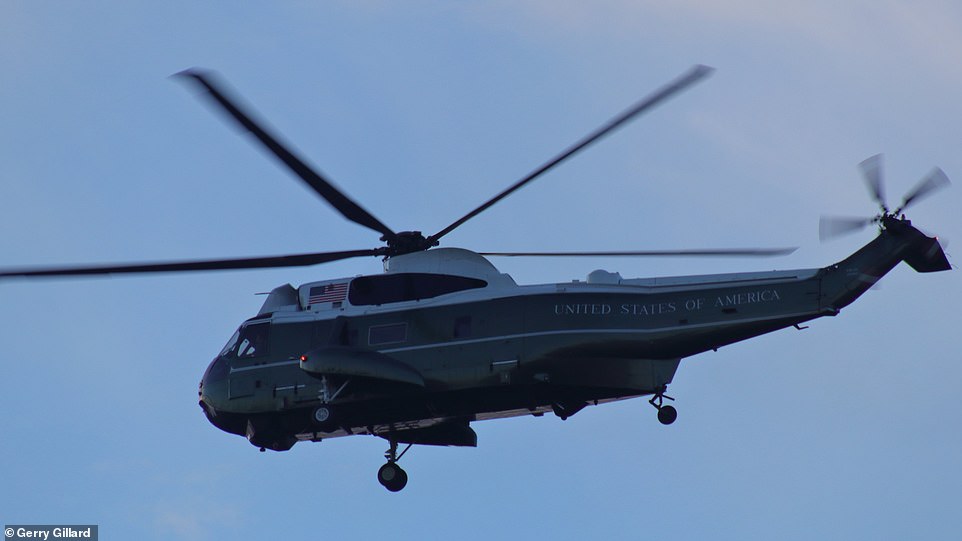 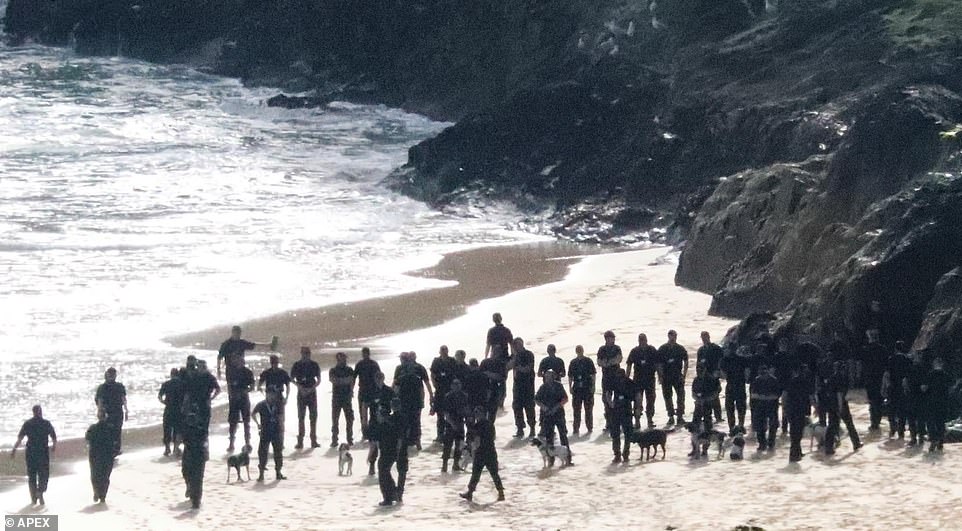 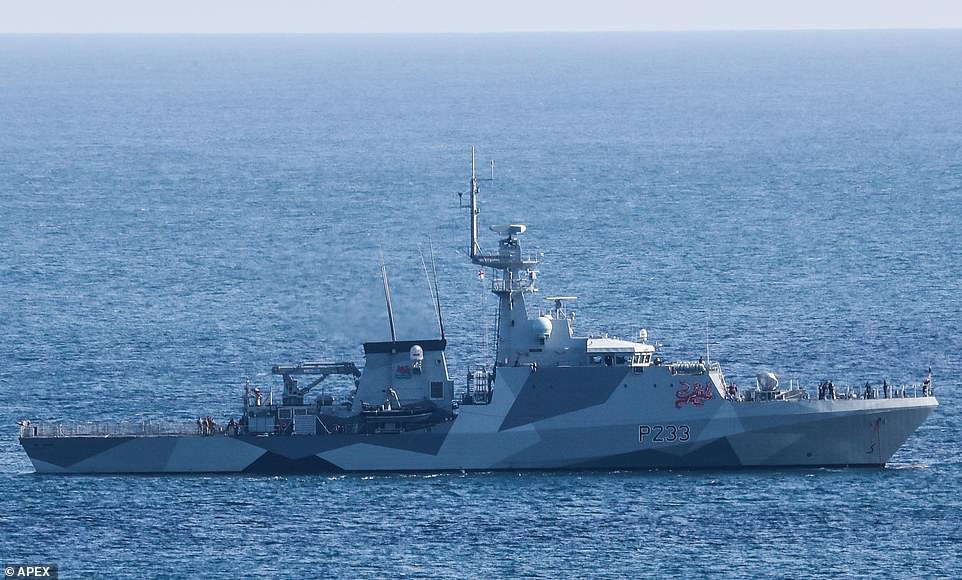 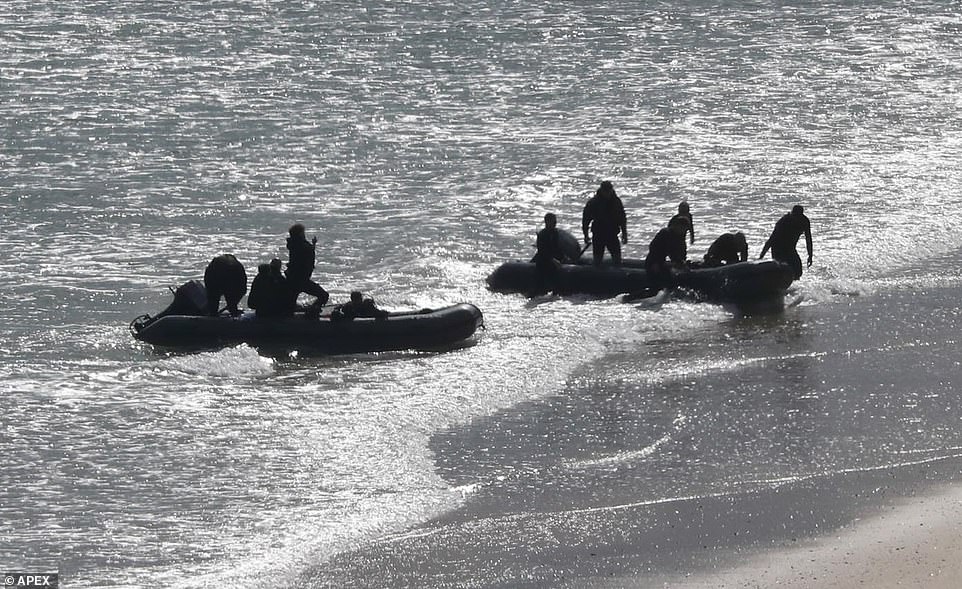 Some 30 vehicles have been leased from a Somerset company called Empire RV. They supply the luxury vehicles for film shoots and for people attending Grand Prix events.

The US camper vans are so large that the company warns many can only be driven by one of their experienced staff and are not available for self-drive hire.

The most luxurious American campers – some the size of a articulated lorry – can sleep up to eight people and come equipped with satellite TV and many other home comforts.

The RVs are expected to be driven to the Tregenna Hotel in Carbis Bay where the US President is due to stay during the three-day conference.

The US motor homes have been rented for £2,500 each for a week by the US Embassy in London and include the 45ft long former RV used by Jensen Button when he was racing in Formula 1.

A spokesman for Bristol based Empire RV said they had set up a mini village at the St Mawgan airbase. The RVs will be used by support staff and Secret Service agents for President Joe Biden during his stay in Cornwall. 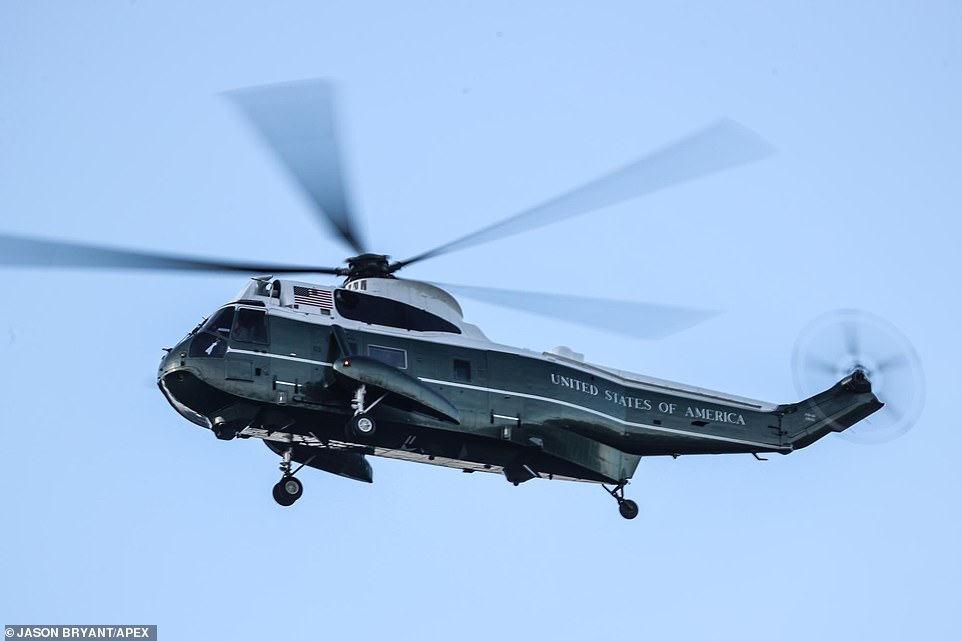 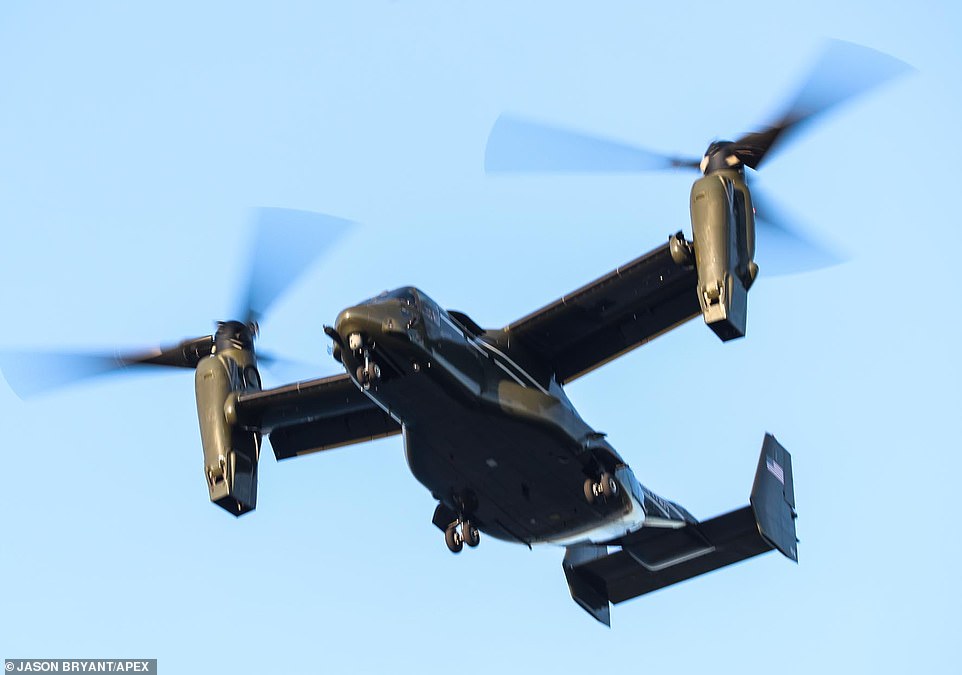 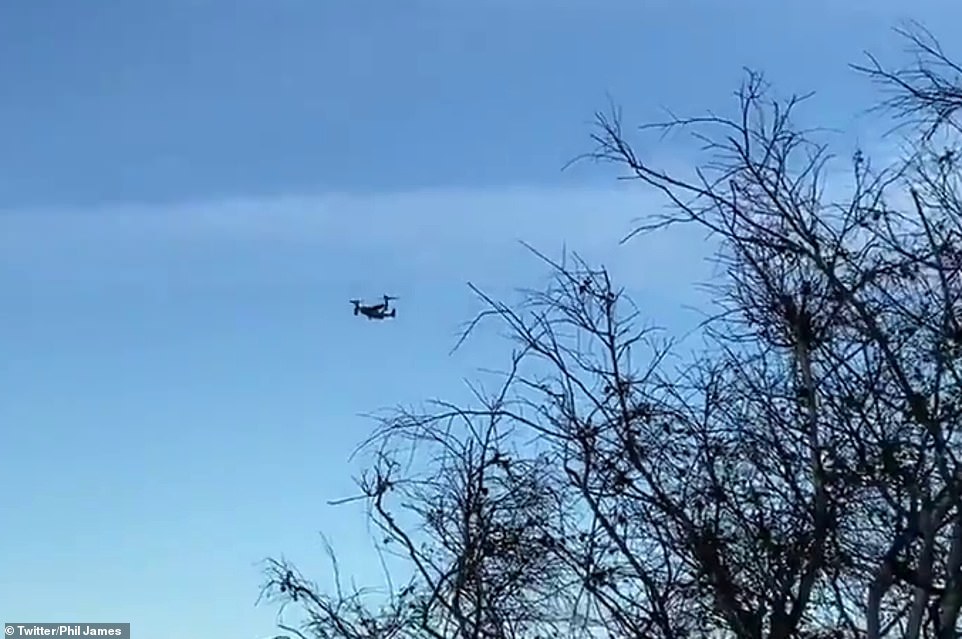 An Osprey is pictured landing at Tregenna Castle, St Ives for G7 meeting. Three US Marine Osprey aircraft have been seen over St Michael Mount and the Carbis Bay area 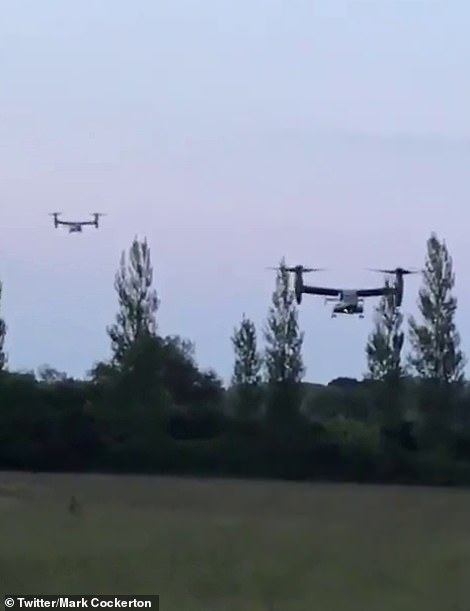 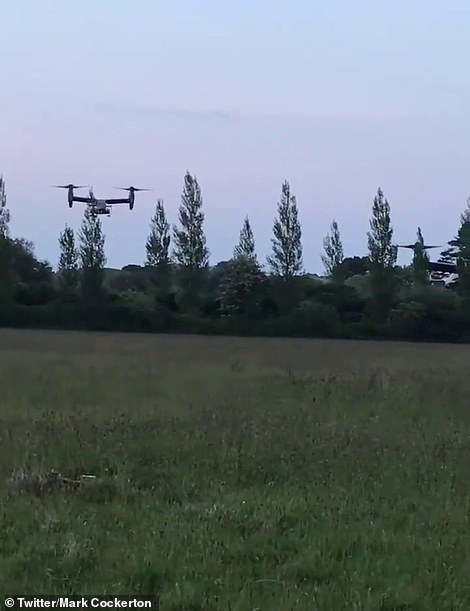 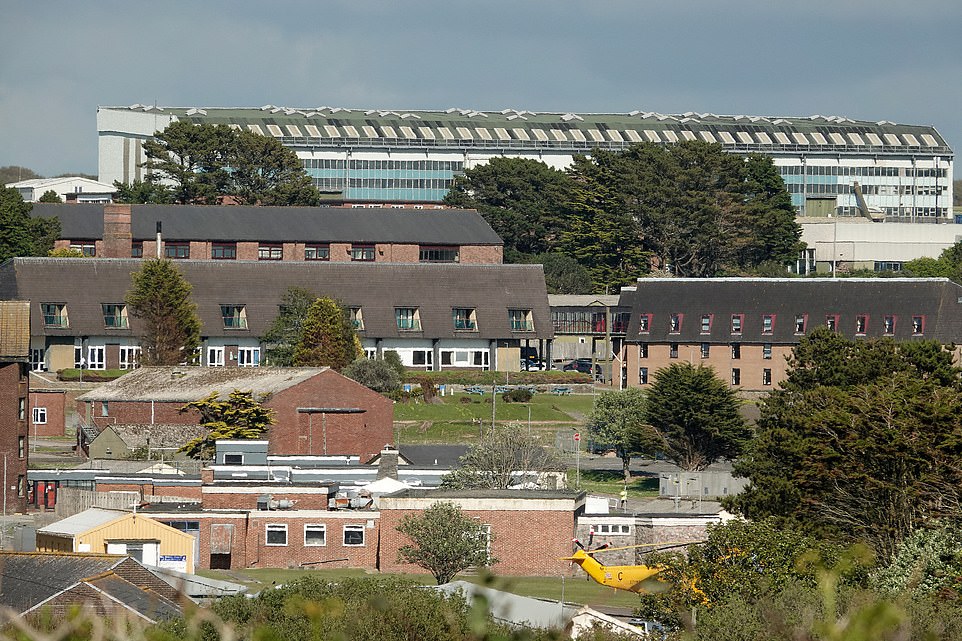 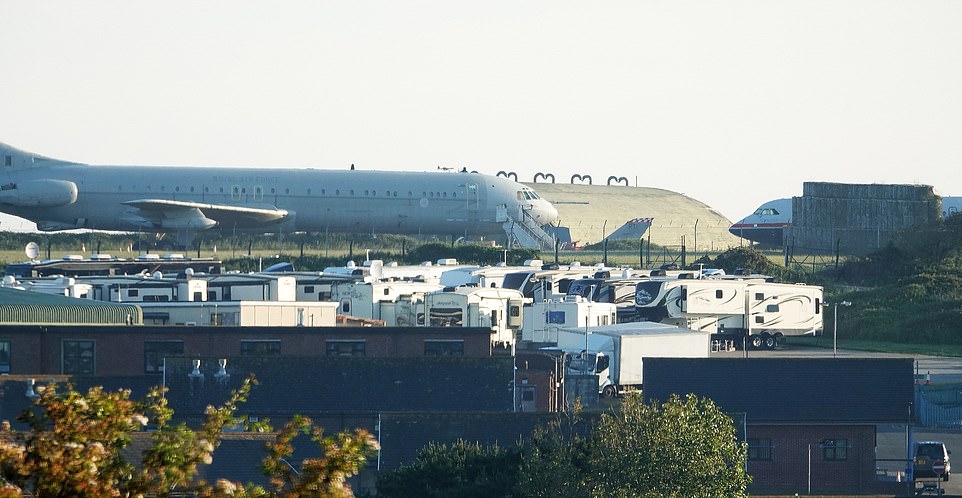 The 400 strong contingent of staff accompanying the President is so large the Cabinet Office, who are organising the G7 event, baulked at waiving quarantine rules for so many. Pictured, the RVs 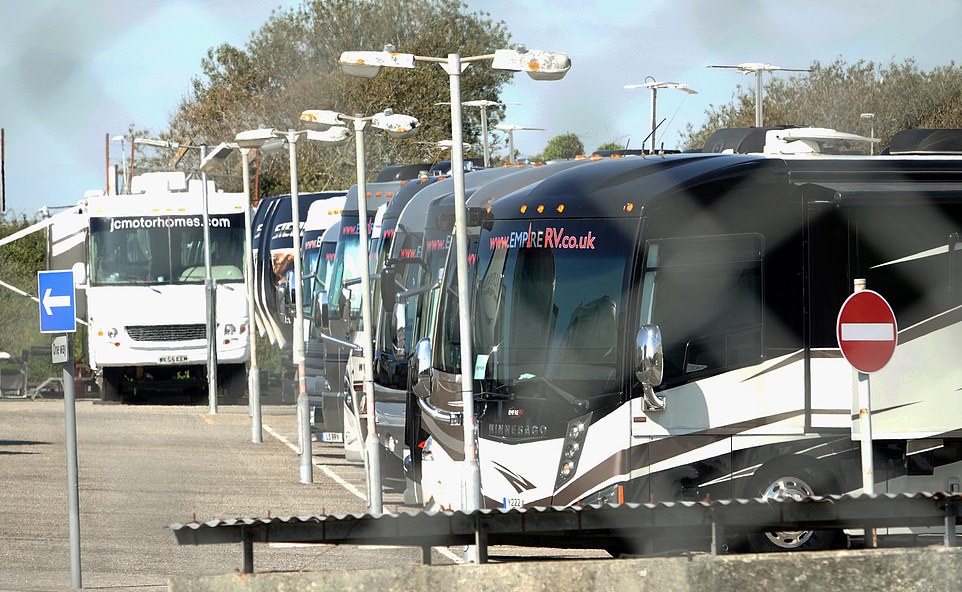 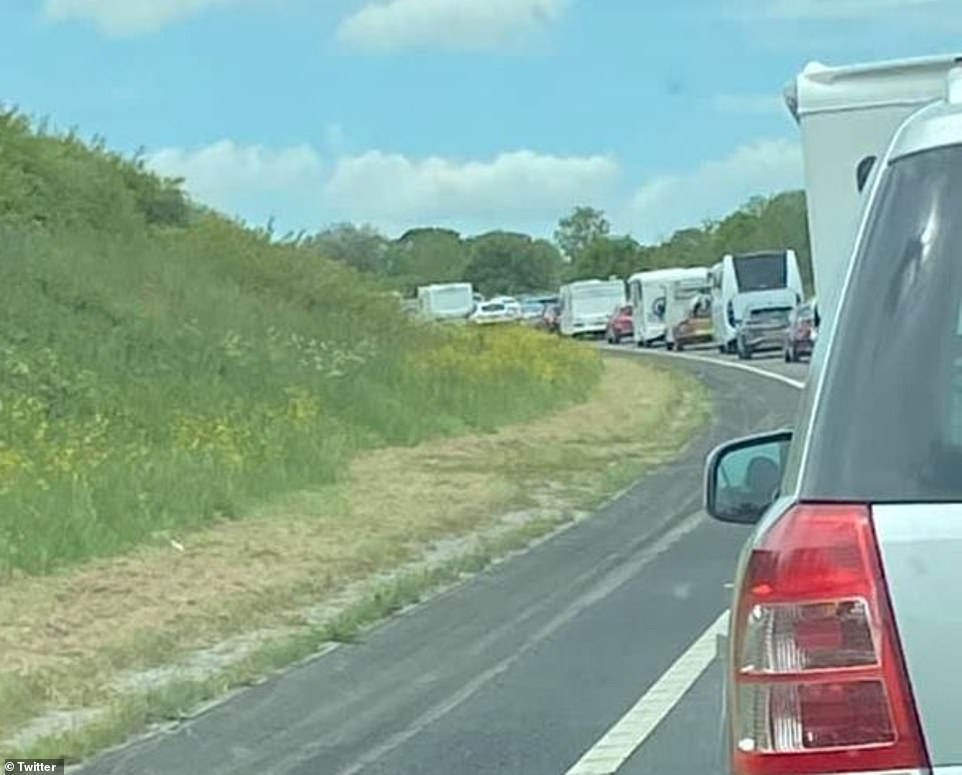 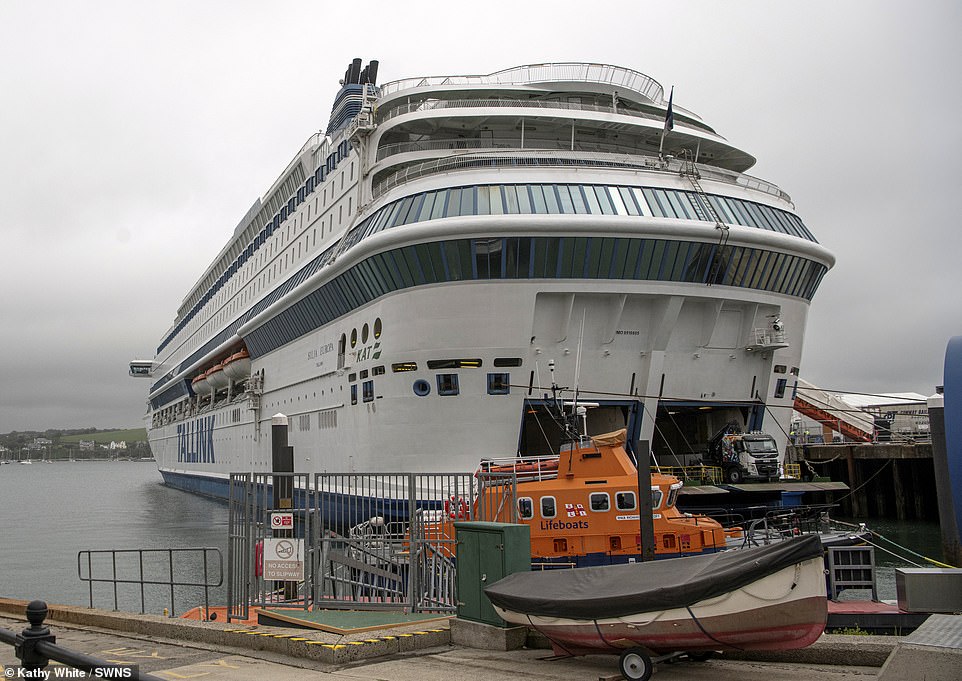 The huge cruise ship Silja Europa, which has been hired to accommodate many of the 6,500 police officers who will be policing the G7 Summit in Cornwall, has docked in Falmouth as the Cornish town prepares to welcome world leaders 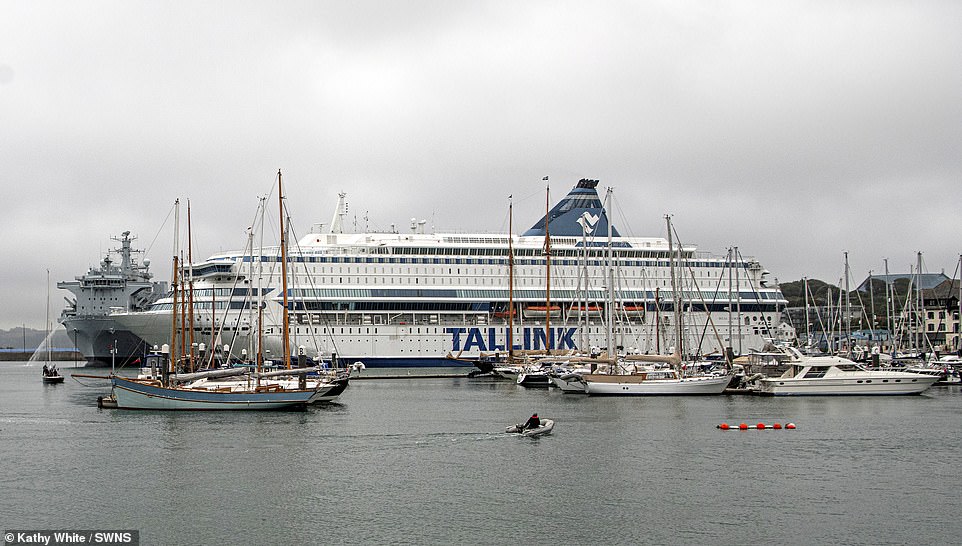 More than 6,500 officers from forces across the UK are set to be deployed across the summit, and hundreds of police will spend their off-duty time on the massive 202m long MS Silja Europa 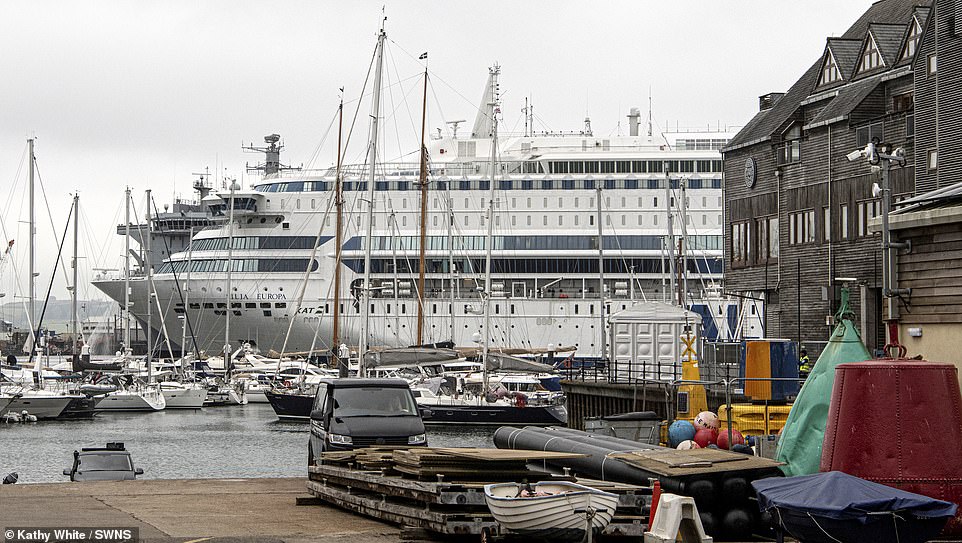 The 14-deck vessel, which was built in Germany in 1993 and can reach speeds of 21 knots, can carry more than 3,000 passengers with hundreds of cocktail-tray waiters, maids and other crew to look after their every need

A helicopter dubbed Marine One when the US president is onboard practised landing on the golf course at the Tregenna Castle Resort – where President Biden and the other world leaders will stay – on Monday evening. His pilots familiarised the route they will take after Air Force One lands at Newquay Airport later this week.

President Joe Biden’s first foreign trip as the US leader will feature a meeting with the Queen following the G7 summit. Here’s his full schedule to June 16:

Biden and his wife, Jill, leave Washington on Wednesday morning. Their first stop in the UK will be at Royal Air Force Mildenhall to greet U.S. Air Force personnel stationed there. Mildenhall is home to the 100th Air Refueling Wing, the only permanent U.S. Air Force air refueling wing in the European theater.

Biden will meet Prime Minister Boris Johnson in Cornwall, site of the G7 summit, to reaffirm the special relationship between the United States and the United Kingdom.

Biden will attend the G7 summit for three days starting on Friday, to work on U.S. policy priorities such as the economy and allied unity.

Biden will finish his meetings at the G7 summit. Afterward, the Bidens will meet Britain’s Queen Elizabeth at Windsor Castle. Then Biden will travel to Brussels for the night.

Biden will meet NATO leaders and have a private meeting with the president of Turkey, Tayyip Erdogan.

Biden will hold more NATO meetings and then fly to Geneva for the night.

Biden will meet Russian President Vladimir Putin on Wednesday, their first face-to-face meeting since Biden became president. White House national security adviser Jake Sullivan said on Monday it was unclear whether the two leaders would hold a joint news conference after their talks.

The skies above Cornwall have this week been buzzing with US military aircraft in preparation for Biden’s arrival.

Three US Marine Osprey aircraft have been seen over St Michael Mount and the Carbis Bay area.

The aircrafts’ purpose is to fly White House staff during the President’s trips abroad. They also transport Secret Service agents that follow Marine One in case the helicopter goes down.

Yesterday evening at 8pm Ospreys were seen over Haldon Hills near Exeter, where it is thought they may have just left Exeter Airport.

By 8.40pm the aircraft were spotted landing at Tregenna Castle Resort.

It is Biden’s first overseas trip since being sworn in as president in January after beating Donald Trump in the November election.

The 400-strong contingent of staff accompanying the President is so large the Cabinet Office, who are organising the G7 event, baulked at waiving quarantine rules for so many.

But after assurances all staff accompanying the President have undergone Covid tests, as well as being fully vaccinated, approval was given.

Members of the Secret Service, who are tasked with protecting the President, have made numerous visits to the Carbis Bay hotel where the conference will be held.

They have been liaising with Devon and Cornwall Police over security arrangements being put in place during the summit which begins on June 11th.

Protestors’ promises to attempt to disrupt the conference led 5,000 police officers from around the UK to be drafted in to provide round the clock security.

Residents living near the hotel will have to show two forms of ID to be allowed past check points as a ring of steel is thrown around the summit venue with roads and coastal footpaths closed.

Police began ramping up security by announcing they would be closing down access to the 30 bridges over the A30 – the main road leading into and through Cornwall, including towns such as Bodmin, Redruth and Truro.

Fears that the protestors from Extinction Rebellion and other groups will try to shut down the A30 led police to restrict access.

Paper notices have been pinned to lampposts informing residents that the bridges will be closed for up to 21 days.

The notices read: ‘It is necessary to mitigate the danger to the public or damage to the highway (from incidents) that may arise from the hosting of an event taking place in Carbis Bay.’

A spokesman for Devon and Cornwall Police said the closures had been enforced under Anti-Terrorism Traffic Regulation Orders.

The cost of policing the G7 Summit has been put at £70million and is by far the biggest security operation put into force in Devon and Cornwall.

Climate change activists have been warned they will not be allowed to stage any demonstration near to the Carbis Bay area with designated areas for protests in Falmouth and Plymouth.

But with Extinction Rebellion calling on its supporters to converge of Cornwall there are fears they will attempt to breach the security cordon thrown around the Carbis Bay and St Ives area.

A protest group Resist G7 has started a GoFundMe donation page to raise money for protestors to travel and stay in Cornwall during the conference.

No joint press conference for Putin and Biden: Joe REFUSES to stand next to Russian president