A tycoon at the centre of a lobbying scandal engulfing David Cameron was given extraordinary access to No10 and struck a controversial NHS deal reportedly rejected by civil servants which profited banks.

Australian financier Lex Greensill was allegedly granted a security pass and team of civil servants during Mr Cameron’s time in Downing Street so he could promote a financial product he specialised in across Whitehall.

The banker hired the former prime minister as an adviser at his financial services company Greensill Capital in 2018, with share options worth tens of millions of pounds and whose collapse now threatens 50,000 jobs.

An investigation by the Sunday Times has now alleged the Australian tycoon, a married father-of-two who lives in Cheshire, ‘seduced’ the British establishment and embedded himself into the heart of government.

Mr Greensill, the son of Australian sugar cane farmers, left school during a harvest so bad it dried up his parents’ cash flow. He studied law by correspondence, receiving cassette tapes in the post because he could not afford university.

The financier arrived in Britain aged 24, and joined American banking giant Morgan Stanley in 2005 as the bank was expanding into supply chain finance  – a tool to help businesses left vulnerable by late payments. 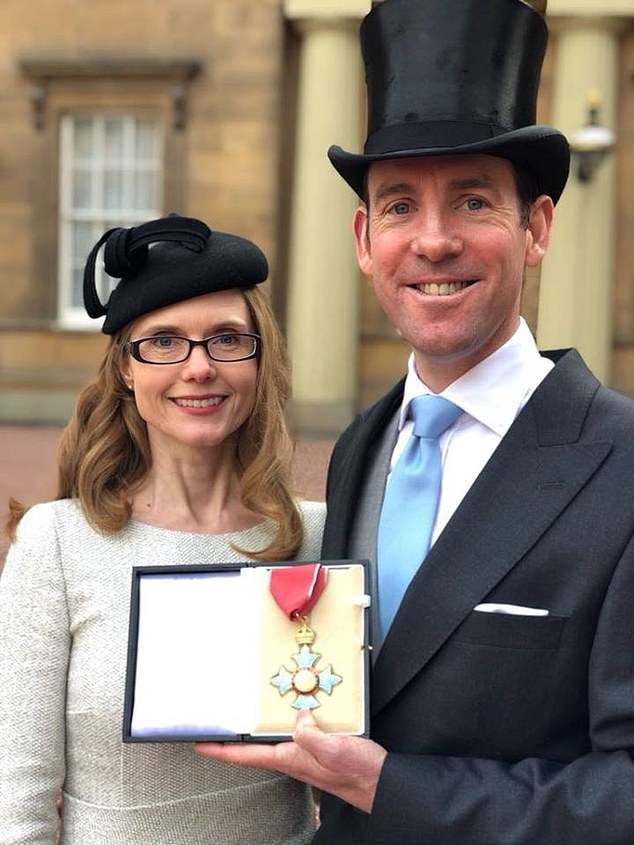 Australian financier Lex Greensill was allegedly granted a security pass and team of civil servants during Mr Cameron’s time in Downing Street so he could promote a financial product he specialised in across Whitehall. Pictured receiving his CBE at Buckingham Palace in 2017

The Greensill saga: How Australian banker ‘gained access to No10 and Whitehall’

July 2011 – Heywood starts pushing for Lex Greensill to become an adviser on ‘supply chain finance’ – a method of speeding up payments between a company and its suppliers using the finance of a third party (ie. bank).

The Government has claimed his position as adviser was unpaid.

January 2012 – Greensill tours Whitehall, pitching his proposals to 11 departments or agencies including the Department of Health.

He is given a team of officials, security pass and a desk in the Cabinet Office.

Summer 2012 – Greensill’s proposal to pay NHS-affiliated pharmacies using private finance make their way to David Cameron, who signs it off.

An official alleges the report was edited and that the first draft did not support Greensill’s idea. Greenshill has reportedly denied that he had any part to play in this if found to be true.

December 2013 – Greensill is appointed as a Crown Representative, an official adviser from the private sector to the government.

August 2016 – Greensill is bailed out by trader Sanjeev Gupta, who temporarily takes a stake in the finance firm.

June 2017 – Greensill is awarded a CBE for ‘services to the economy’.

Under the scheme, a bank wedges itself between and company or small business and its suppliers and pays immediately for a fee. It was this model that he would later pitch to officials across Whitehall.

While at Morgan Stanley, Mr Greensill met Jeremy Heywood, Mr Cameron’s later chief of the civil service who was on a break from Whitehall at the time. The Cabinet Secretary died of cancer aged 56 in 2018.

The paper reported that Mr Cameron and Mr Heywood gave Mr Greensill unprecedented access to No10 and 11 Whitehall departments and agencies.

Citing leaked documents and minutes, it said Mr Cameron, who resigned as prime minister in 2016 after his Remain campaign lost the EU referendum, signed off on a multi-billion-pound loans scheme in 2012 for NHS-linked pharmacies.

Under Mr Greensill’s plan to get small businesses paid on time, a bank would quickly reimbursing pharmacies for the cost of providing prescription drugs instead of making them wait weeks for the NHS to repay them.

Praised at a Downing Street reception by Mr Cameron as an ‘innovative scheme’, its beneficiaries were Mr Greensill’s former bosses at Wall Street giant Citibank and, eventually, his own financial services company.

Civil servants and officials told the Sunday Times that Mr Greensill’s ascent rested on Mr Heywood, Mr Cameron’s then Cabinet Secretary who had ‘discovered’ the Australian tycoon while working in the private sector.

Mr Heywood is said to have brought the banker on board in 2011 and tasked him with spending six months exploring whether supply chain financing could help the Government to pay suppliers more quickly.

Mr Greensill was reportedly given a security pass and four civil servants who were told to explore his ideas, write a report and submit it to ministers. He was later given a desk in the economic and domestic affairs secretariat of the Cabinet Office.

In January 2012, the banker apparently began a whistle-stop tour of Whitehall, pitching his proposals to 11 departments or agencies including the Department of Health, the Ministry of Defence and the Department for Transport.

His undisclosed meetings also included pitches to finance Britain’s fleet of Typhoon fighter jets and Voyager refuelling planes and to fund the upgrade of the country’s biggest motorways, including the M62, M4 and M5.

Over the summer, Mr Greensill’s proposal to pay NHS-affiliated pharmacies using private finance made their way to Mr Cameron, who signed it off.

However, a leading official alleged that the report was handed directly to Mr Cameron, bypassing Francis Maude, the Minister for the Cabinet Office Paymaster General, entirely – and had been edited.

They told the paper that the main author’s name had been removed and replaced with Mr Greensill’s, and that the initial draft did not support the banker’s proposal.

Officials are understood to have instead warned that supply chain finance was not the most effective way of helping thousands of small businesses which supply prescription drugs secure reimbursement by the NHS.

The report is said to have suggested that there were were ‘better and simpler routes’ to pay suppliers, some of which were already in place in Whitehall.

No10 awarded the contract to Citibank, Mr Greensill’s former employer which he had left before entering Whitehall, which ran the scheme for six years.

In 2018, Greensill Capital won the contract, and provided £1.2billion in loans to pharmacies, taking a fee for every loan, from July 2018 until last month. 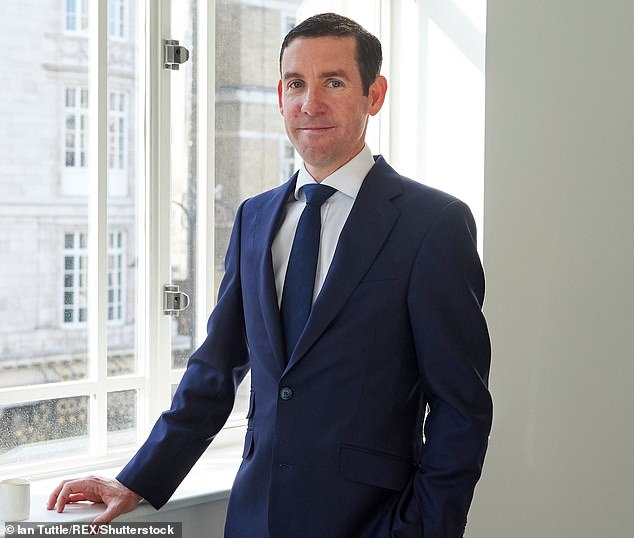 Mr Greensill, the son of Australian sugar cane farmers, left school during a harvest so bad it driged up his parents’ cash flow. He studied law by correspondence, receiving cassette tapes in the post because he could not afford university 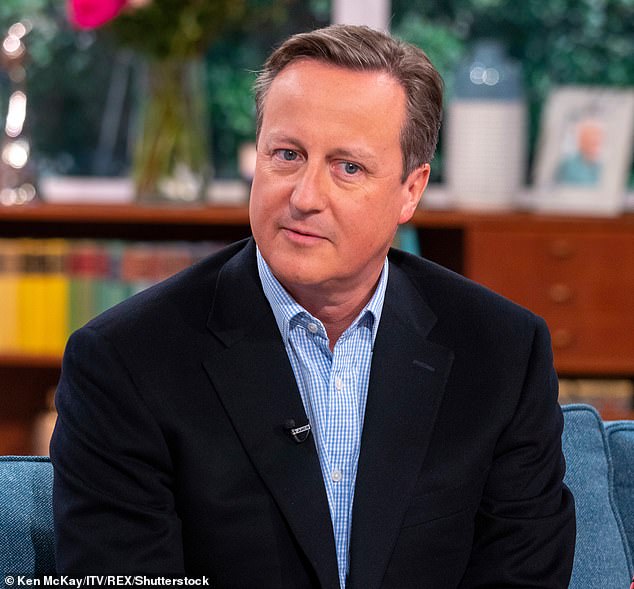 The banker hired Mr Cameron as an adviser at Greensill Capital in 2018, with share options worth tens of millions of pounds and whose collapse now threatens 50,000 jobs

Mr Greensill was made a crown representative, one of a selected cadre of businesspeople advising the Government. In 2017, he was made a Commander of the British Empire in the Queen’s Birthday Honours List.

The Australian financier then hired Mr Cameron as an adviser in 2018, giving him share options which could be worth tens of millions of pounds.

At the time, Mr Cameron is said to have had share options potentially worth tens of millions of pounds. Mr Cameron was last week cleared of breaking lobbying rules, but questions over his activities with Greensill Capital persist.

Mr Greensill’s business model was to provide quick loans to companies that did not want to wait until they received payment from their customers.

Two years ago, the company said it had provided financing worth more than £100billion to ten million customers in 175 countries.

But Greensill Capital sunk into administration this month when it emerged that many of its loans were unlikely to ever be repaid.

One casualty of its spectacular collapse has been one of its clients, Liberty Steel, which employs 3,000 across Britain. This weekend it was seeking an emergency £170million Government bailout to stay afloat.

Sir Alastair Graham, the former chairman of the committee for standards in public life, called for a full inquiry because ‘it sounds like a genuine scandal in which the public purse was put at risk without proper political authority’.

Mr Greensill and Mr Cameron declined to comment to the Sunday Times. Suzanne Heywood, Mr Heywood’s wife, told the paper that the civil service chief ‘took no personal benefit of any sort from Lex’s company’.

The Government said Mr Greensill ‘acted as a supply chain finance adviser from 2012 to 2015 and as a crown representative for three years from 2013. His appointment was approved in the normal manner and he was not paid for either role’.

Congolese special effects artist behind Avengers: Endgame and Guardians of the Galaxy

Congolese special effects artist behind Avengers: Endgame and Guardians of the Galaxy