The summer of soaking: Eastern states prepare for a battering of rain over the weekend

The summer of soaking: Eastern states prepare for a battering of rain over the weekend – but there is good news to come

With summer officially drawing to a close on Sunday, the eastern states of Australia are preparing for a battering of rain over the next couple of days.

But in welcome news, the downpour is then expected to clear in most parts of the east coast by Tuesday or Wednesday.

Sydney will endure showers for most of Saturday, with the clouds only set to briefly disappear on Sunday as the mercury rises to a maximum of 28 degrees.

Brisbane, renowned for its hot weather and humidity, will reach a maximum temperature of 31 degrees – with clouds also predicted all weekend. 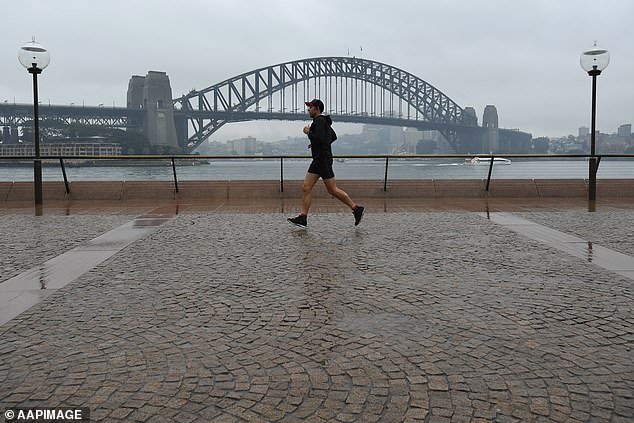 In Melbourne, jumpers will be worn by many, with temperatures as low as 11 degrees on Saturday. Tomorrow is poised to be equally cold, with a low temperature of 12 degrees expected.

Notoriously cold Canberra will reach a maximum of 26 degrees on Saturday, before dropping to 20 degrees for the last day of summer.

Tasmania will be a chilly 10 degrees on Saturday before rising to 12 degrees on Sunday, with partly cloudy conditions forecast for the entire weekend.

Jackson Browne, from the Bureau of Meteorology, revealed the heaviest falls in the country up to 9am on Saturday.

‘Caroda in NSW recorded 80.8mm of rain, with showers and thunderstorms expected to continue across north east NSW and southern Queensland,’ he told Daily Mail Australia.

‘Looking forward to the next few days, a southerly wind change looks to sweep across NSW early next week, with a ridge of high pressure extending across the east.

‘This will bring stable weather conditions to most of the state, barring some lingering thunderstorm activity in the northeast.

‘In Queensland, a slow-moving inland trough will trigger showers and thunderstorms during the next few days, with a firm ridge up the Queensland coast.

‘Flood warnings are also predicted in some areas, particularly in the northern Coral Sea off the coast of far north Queensland.’

The gloomy east coast 48 hour forecast comes as weather experts predicted more of the same in Autumn, which starts on Monday. 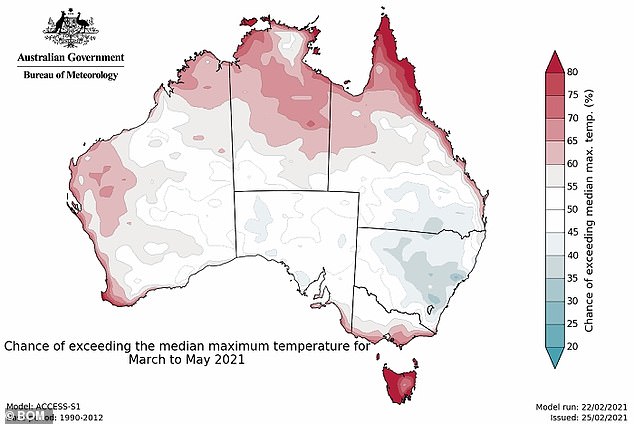 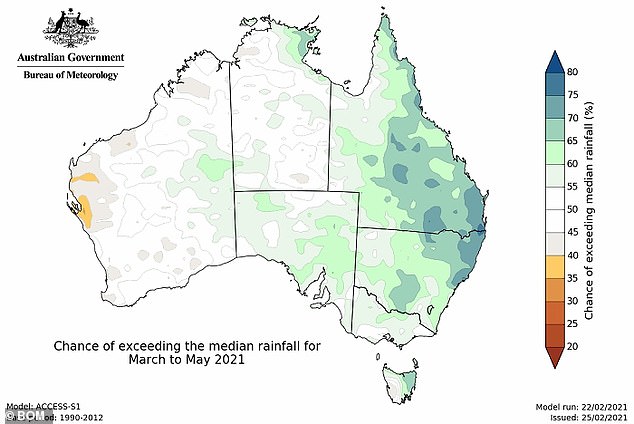 The nation has shivered through its coolest and wettest summer in five years and experts said there will be no sign of a reprieve in the coming months as the La Nina weather system clicks into gear.

Bureau of Meteorology climatologist Dr Andrew Watkins said the atmospheric phenomenon will keep the rain falling in March and April – particularly on the east coast.

Temperatures this summer were the coolest since 2012 – only rising above average in Queensland and the west coast of Western Australia.

‘Autumn rainfall is expected to be wetter than average across large Eastern parts of Australia, particularly in March and April,’ he said.

Above average rainfall is also expected in dry areas of Queensland, while the rest of Australia will enjoy generally normal levels.

Brazil: 65,000 new cases of Corona and a complete closure in the capital