The Tango mission arrives in Argentina after playing 7 minutes against Brazil.. Video 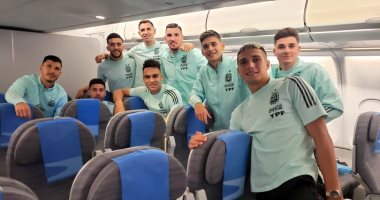 The Argentine national team returned to the country after suspending its match against Brazil yesterday, Sunday, in the South American qualifiers for the 2022 World Cup, due to four players from Tango breaching health protocols on “Covid-19”.

The crisis began with the match between the Brazilian national team and its Argentine counterpart stopping a few minutes after its start. FOX Sports BrasilThe television reported that the Super Clasico was suspended due to a request by members of the “Anvisa” organization, the national health monitoring agency in Brazil, to stop the match due to the participation of Argentine players who violated the quarantine rules.

And local media monitored the arrival of the Tango mission to the headquarters of the Argentine Federation after suspending its match against Brazil after playing 7 minutes of the meeting, and then storming the health officials of the Quartet of Argentina, Martinez, Buendia, Lo Celso and Romero, to remove them from the meeting after breaching the protocols imposed on the Corona virus.

The Argentine delegation left Brazil at dawn today, Monday, to return to its country.

Regional Director of Global Health: We were surprised by the Corona pandemic and did not prepare for it properly