The TV interview that proved Ted Bundy was guilty, according to body language experts 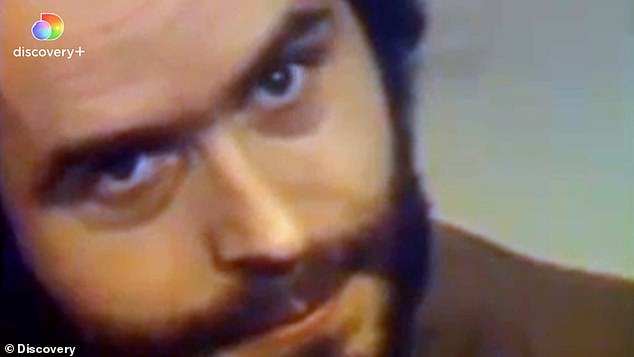 Notorious serial killer and rapist Ted Bundy gave himself away as guilty during a TV interview ahead of his murder trial with three small gestures, according to a body language expert.

Bundy was sentenced to death after he admitted to murdering 30 female college students across three different states in the 1970s; he later claimed responsibility for dozens of other deaths after he was finally brought to justice.

Before his death by electric chair in Florida in 1989, Bundy, who reveled in his deadly notoriety, gave a number of TV interviews, and these tapes have been re-examined in a new discovery+ documentary Ted Bundy: A Faking It Special.

In one clip, which was filmed when the serial killer had only been convicted of kidnap and was awaiting his trial for murder, the murderer made several gestures that demonstrated his guilt, according to body language expert Dr Cliff Lansley.

‘Number one, we get an eye closure, which distances ourselves from the words we’re using. Number two, we get a shoulder shrug from one side, and this is a partial expression – leakage – of the full expression of “I have no idea what I’m talking about,”‘, says Dr Cliff.

Notorious serial killer and rapist Ted Bundy (pictured) gave himself away as guilty during a TV interview ahead of his murder trial thanks to three little gestures, according to a body language expert

Before his death by electric chair in 1989, Bundy gave a number of TV interviews (pictured) as he revelled in his notoriety. These tapes have been re-examined in a new discovery+ documentary Ted Bundy: A Faking It Special

‘But to nail this, we get a little head shake “no”. And when you’re saying something affirmative, but your body is leaking something in the negative, you can trust the body. Because most of these body signals are below consciousness.’

The expert adds that Bundy’s self-awareness is his undoing in the 1977 clip, as he chillingly stares down the camera lens.

‘Now, Bundy’s emotional intelligence, or self-awareness, I judge to be high. What gives me that conclusion is that every time he makes these slips, which are below consciousness, maybe he knows he’s not convincing,’ he explains.

‘What gives us a clue is a few seconds further on we get this stare right down the camera lens. I think he knows he’s slipped up; this camera check is a semi-conscious check-in of his audience to see if he’s getting away with it.’

Bundy was arrested on kidnap charges in 1975, with police also linking him to murders across several states.

In one clip, in which Bundy had only been convicted of kidnap and was awaiting his trial for murder, the murderer performs several gestures that show he’s guilty of being a serial killer, according to body language expert Dr Cliff Lansley (pictured)

In another interview analysed in the documentary, Bundy is relaxed and forthcoming, behaviour not typically associated with people facing murder charges, Forensic Psychologist Kerry Daynes notes.

‘Bundy is doing everything that he can to project a confident, relaxed persona. It’s a full-on charm offensive,’ she says.

For body language expert Dr Cliff Lansley, this is Bundy’s attempt at making himself seem ‘likeable’ in front of the TV cameras.

‘So, he’s very clever here, and he’s trying to move in and engage and create a good impression,’ he says. ‘If we can help people to like us then they’ll trust us and believe us, and if we can create that vulnerability and likeability, it’s a powerful influencing tactic.’

Speaking to the interviewer, Bundy confidently proclaims that he expects to be cleared ahead of his trial for murder.

Bundy (pictured in 1977) was arrested on kidnap charges in 1975, with police also linking him to murders across several states

Asked about whether he worries about reprisals from the victims’ families if he were to be released from prison, Bundy brushes off the suggestion.

For Professor of linguistics Dawn Archer, this is Bundy’s attempt at putting more distance between himself and the charges levelled against him, further indicating guilt and his attempt to pull the wool over the public’s eyes.

‘Word choice is interesting here. “Apparently suffered,” when he knows they suffered. This is, for me, him trying too hard,’ she says.

‘If he was innocent, it wouldn’t be a problem to identify with the parents of the girls and acknowledge that of course they’ve suffered. So, the “apparently suffered” is a form of distancing that I don’t think he would have to do if he was innocent.’

As the interview continues, Bundy is asked if he ‘is not guilty’ by the interviewer and quickly replies by laughing and throwing his head back, before saying: ‘Does that include the time I stole a comic book when I was five years old?’

By laughing the question off, Bundy further incriminates himself, Cliff Lansley argues.

After two murder trials, Bundy (pictured) would confess on death row in 1989 to taking the lives of at least 30 women across the country from Washington to Florida

‘That laughter can give him two results. One is that it gives him breathing space, because we only need three or four seconds to think of two sentences; our minds work very quick.

‘It could give him thinking space,’ he says. ‘But it also helps him with his report, and this charm where he can engage and influence others.’

‘When we see rapid blinks together, it gives us an indication that someone is thinking hard. Now, we call that cognitive load,’ he says. ‘And also, a little licking of the lips. So, we know he is experiencing an emotional load.’

Despite presenting himself as relaxed, Bundy’s body language suggests otherwise, instead showing a man under immense stress.

After two murder trials, Bundy would confess on death row in 1989 to taking the lives of at least 30 women across the country from Washington to Florida.

Bundy never truly revealed where his victims were buried which caused more heartache for families. Experts believe he could have killed as many as 100 people.

Ted Bundy: A Faking It Special is available to stream exclusively on discovery+ from Saturday 26 June

‘HE SAID HIS NAME WAS TED’: BUNDY’S TRAIL OF YOUNG FEMALE VICTIMS DURING MULTI-STATE KILLING SPREE

The name Ted Bundy is synonymous with serial killer after the shy and attractive psychology major embarked on a killing spree in the 1970s that left more than two dozen women dead. There is speculation he could be responsible for up to 100 murders.

In 1974, witnesses saw a young man, who introduced himself as Ted, approach two young women at Seattle State Park and ask for help with his sailboat. They were never seen alive again and became his first known victims.

It was in the same year that several young women disappeared from college campuses in Washington and Oregon – including a 21-year-old radio announcer called Lynda Ann Healy.

Later that year, Bundy relocated to Utah to attend law school in Salt Lake City. In November, Carol DaRonch was attacked by a man she described dressed as a police officer but escaped.

She gave the first clear description and a blood sample from her jacket. Miss DaRonch also told police that he was driving a tan VW Beetle. As Miss DaRonch was giving her statement, 17-year-old Debbie Kent disappeared.

A short time later, hikers found the bones of missing women in a Washington forest. A rough sketch was drawn – a tall, thin attractive man who approached young, white women looking for help and called himself ‘Ted’.

Police also noted common factors among the victims – they were all thin and had long hair parted in the middle. All the women were targeted in the evening and bludgeoned with blunt objects. The victims had also been raped.

At the beginning of January 1975, Caryn Campbell vanished from a Colorado ski resort. Her naked body was found a month later in a ditch by the side of the road. Five more women were founded murdered in a similar manner in the following months.

In August, police pulled Bundy over for a driving offence. When Miss DaRonch picked him out of a line-up, he was charged with attempted kidnapping.

He was sentenced in 1976 to 15 years in prison and later police connected him to the murder of Caryn Campbell.

On December 30, Bundy escaped from prison and turned up in Tallahassee, Florida renting an apartment near Florida State University under a false name.

On January 14, 1978, Bundy struck again. He broken into the Chi Omega sorority house and bludgeoned and strangled to death two women, raping one of them and viciously biting her body.

He almost murdered two others by beating them over the head with a log before a roommate interrupted his spree.

Almost a month later on February 9, Kimberly Leach, who was 12, was kidnapped and mutilated by Bundy. The serial killer was picked up a week later while driving a stolen car before witnesses placed him at both the sorority house and outside Kimberly’s school.

Charged with three murders – killing the two sorority women and another Kimberly LaFouche – Bundy believed he could beat a guilty verdict and turned down a plea bargain of three life sentences. He went on trial in Florida on June 25, 1979, found guilty and sentenced to death.

Prior to his execution, Bundy gave the details of the murder sites of more than 50 women. He also said that he kept the heads of some women at his home to engage in necrophilia.

Man in custody in connection to NYC shooting inches away from kids: police

Residents push back on subdivision plans

Residents push back on subdivision plans