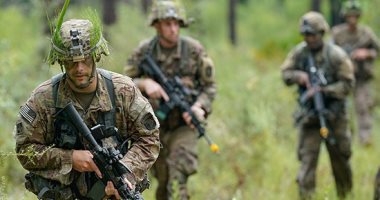 Acting US Defense Secretary Christopher Miller said that the Special Operations Forces were the first to be deployed to the war in Afghanistan in nearly 20 years, and will likely be the last to leave the country before the middle of next year 2021.
This came during a visit by the US official to his country’s forces and the US military command in Afghanistan, where he went to “Morehead” camp, south of Kabul, to listen to the forces working there and closely see developments in the war, and to learn about the training of American special operations forces (commandos).
Miller said, “I went to Afghanistan to get a closer look at the reality of the situation from the fighters … Their smart comments and opinions led me to the conclusion that we are in a good position,” according to what came in the context of a press report published by the “Stars and Stripes” website.
During his visit to Afghanistan, the Acting US Secretary of Defense met with General Scott Miller, Commander of US and coalition forces in Afghanistan, and held talks with Afghan President Ashraf Ghani to discuss the US commitment to Afghanistan’s security and the continued withdrawal of about 2,500 Americans before January 15.
Miller said that he had spoken to the commander of US and coalition forces in Afghanistan “intensely” about the work that the Special Operations forces would accomplish over the next two months, as all US forces are expected to leave the country by May 2021, and the last remaining American forces are likely to emerge. This history includes counterterrorism operations against al Qaeda and support for Afghan security forces.
Miller, who was a former soldier in the Fifth Group of the US Special Forces and one of the first soldiers in Afghanistan in 2001, explained that he “always felt that we made a big strategic mistake by extending the war” beyond the operations of the Special Operations Forces and then making them, including himself, go to Iraq to start a war there.
He added, in front of a delegation of journalists and reporters who escorted them during the visit: “I think that the war in Afghanistan and Iraq required a large army and a large air force .. I think we might have achieved a slightly different result in Afghanistan if we did so.”
Miller pointed out that the issue of reducing the US military presence in Afghanistan is related to the strategic assessments of the United States of America with the approaching end of the war in Afghanistan, referring in an implicit way to lessons learned, and perhaps mistakes, from that war, saying: “I think we gave everything we have, and we certainly did, And I think there are some cautionary strategic lessons that I do not know whether the army will learn them or not. “
On raising the capabilities of the Afghan forces, Acting US Defense Secretary Christopher Miller said that he heard during the trip that “the Afghan security forces are much more capable than I explicitly thought,” and that the United States is still capable of inflicting damage to the Taliban, if necessary.
During a lunch at Hamid Karzai International Airport before his meetings with American and Afghan commanders, Miller stressed, in his speech to American forces and civilians in Afghanistan, the importance of their work for the withdrawal, and that “we are supposed to leave by May 2021, all of them” This is the agreement, isn’t it ? This mission is really the mission that will get us to a place where we can leave while leaving a security capability that can survive after we leave, whatever happens next. “
He assured the attendees that he had come to thank the Afghan leadership for their work, and to express hope for reaching a peace agreement between the Afghan government and the Taliban, stressing that the Afghan president is in a difficult position, but he has solutions to calm the situation, but it is difficult to be certain of such matters in situations of war. It is difficult to achieve a complete victory like World War II.
He explained that the end of the war in Afghanistan also closes a chapter for the special operations community, which has suffered a great deal from stress, losses and wasted time abroad during the past 19 years, noting that the pressure and challenges that these deployments impose on families of members of the Special Forces “were, in fact, a source of concern.” Big for me. “
He expressed his hope that the American forces would leave Afghanistan and that next year would not witness a similar visit, expressing his hope that this conversation would not take place next Christmas around a whole group of people who are moving away from their homes.

Queen's dislike for Tony Blair is 'bed-blocking' the honours system