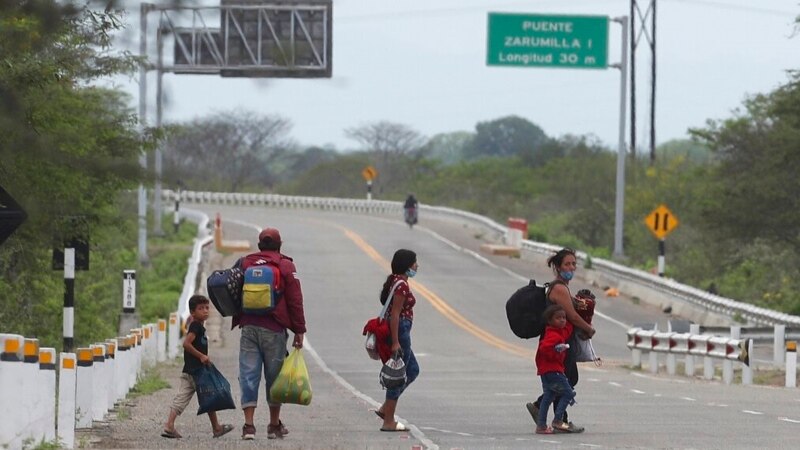 The Deputy Assistant Secretary of State for the Bureau of Western Hemisphere Affairs at the US Department of State, Emily Mendrala, insisted on Friday that there must be “a coordinated regional response to the management of irregular migration” to address the causes of this phenomenon and seek incentives so that people do not have to leave their countries of origin.

In fact, that was the main theme that was discussed at the Ministerial Conference held in Panama this week with the participation of Secretary of State Antony Blinken, along with other top-level representatives of governments from the South American continent.

“The United States continues to work with leaders in Panama and throughout the region in recognizing our shared responsibility to address forced displacement and manage irregular migration,” the senior official said during a telephone press conference.

Mendrala stressed that “in addition to protecting the security of our borders in a safe, orderly and humane manner,” we must also work together “to guarantee the well-being of millions of people throughout our hemisphere who leave their homes in search of a better life.” .

“That means improving the way we manage migration and address the protection needs of the most vulnerable people in our hemisphere,” he said, adding that “it also requires a longer-term effort to address the root causes that motivate irregular migration. ”.

However, he also hopes to lay the foundations in the countries where there is a greater flow of emigrants in order to “improve economic opportunities, security and democratic governance and combat corruption.”

“We seek greater regional cooperation among governments, the private sector, development banks, and civil society to contribute to a foundation for long-term inclusive growth and opportunity in the Americas,” he stressed.

The US undersecretary welcomed the fact that some economic organizations, such as the Inter-American Development Bank or the World Bank, also participated in this regional meeting, in addition to the United Nations High Commissioner for Refugees, the International Organization for Migration (IOM). or the United Nations Children’s Fund (UNICEF) “to talk about ways to face the challenges posed by irregular migration and support the most vulnerable people in the region.”

This issue, according to what Mendrala advanced to the journalists, will also be addressed at the next Summit of the Americas, scheduled for the month of June in Los AngelesCalifornia.

“The summit will address strengthening our democracies, fighting corruption, building resilience in our health care system, promoting more equitable economic growth, and fighting the climate crisis, which will contribute to our work to address the root causes of irregular migration,” he said.

The meeting of the US and Cuba

On the other hand, in the press conference it was also mentioned the meeting between representatives of the US Government and Cuba to resume the issuance of immigrant visas on a limited basis starting in May. Although Mendrala did not delve into the issue, he did confirm that “migratory issues” that concern both countries were discussed at the meeting.

“These conversations represent a continuation of our almost 30-year interactions with Cuba on immigration issues as neighboring states,” he explained.

According to her, these meetings “have contributed to a close relationship” between the US Coast Guard and their counterparts in Cuba “about safe, orderly and legal migration, especially in the maritime area.”

This week when the round of immigration talks was announced, some Republican congressmen expressed their discontent and pointed fingers at the Biden administration.

The Republican presenter for Florida, María Elvira Salazar, accused the Secretary of State, Antony Blinken, of failing to fulfill his promise to consult the Cuban-American community, made at the Senate confirmation hearing in 2021.

“Secretary Blinken did not keep his word. Without consulting the Cuban exile community, his State Department will meet tomorrow with the brutal Cuban regime. Another unfulfilled promise of the Biden Administration,” Salazar said in a tweet in which he posted the video fragment where Blinken responded to his questioning then.

US President Joe Biden kicks off his Asia trip in South Korea with a focus on the computer chip shortage that has hit the global economy, touring a...