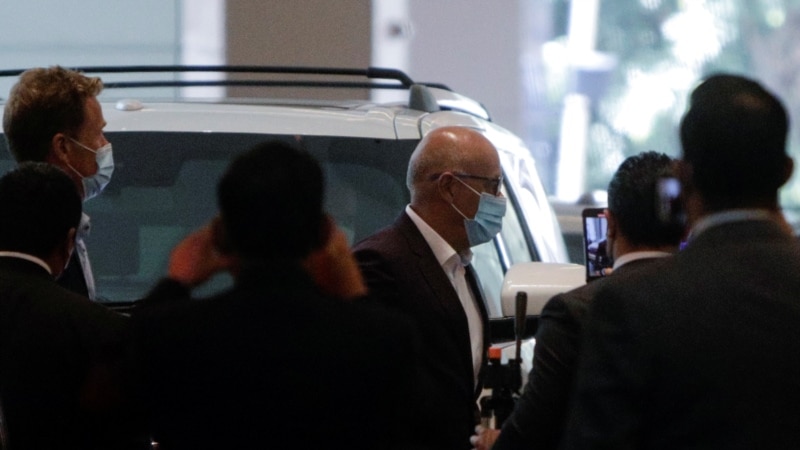 On Tuesday, March 8, the government of Nicolás Maduro released two imprisoned Americans in Venezuela, and that same day the president announced the resumption of the dialogue process with the opposition, which received the approval of Washington.

In October 2021 Mature ended the rounds of dialogue that were being held in Mexico for a possible national reconciliation, when the extradition of Colombian businessman Alex Saab from Cape Verde to the United States was announced, accused of money laundering and being a close collaborator of the Venezuelan president.

The release this Tuesday of two US citizens comes after a delegation from the Biden Administration traveled to Caracas last weekend to address, in addition to a possible rapprochement on energy, “the status and health of Americans in detention.”

Among those released Tuesday is Gustavo Cárdenas, one of six Citgo Petroleum executives who were detained during a business trip to Caracas in November 2017 and later charged with corruption.

The other is Jorge Alberto Fernández, a Cuban-American tourist who was arrested and charged with terrorism for piloting a drone early last year.

Psaki commented that unfortunately they are not the only Americans imprisoned in the South American country. “We will seek to have ongoing discussions,” he stated.

When asked why the Biden Administration was currently negotiating with Maduro, Paski said that at the moment there are no more details to add, nor did she answer why only Cárdenas and Fernández were released.

To the question of voice of america On whether Washington still recognizes Juan Guaidó as interim president of Venezuela, the spokeswoman also did not respond: “This is how we have referred to him. Yes.”

“He is killing the opposition”

Republican lawmakers in Congress criticized the Biden administration’s decision to approach Caracas, accusing it of legitimizing the Maduro government.

“The legitimate government of Venezuela is that of President Juan Guaidó. Let the Biden government travel [a Venezuela] and legitimize Maduro in a meeting is wrong,” he told the voice of america Florida State Senator Rick Scott.

The legislator rejected the possibility that US receives Venezuelan oil again, before the sanctions imposed by Washington on Russian oil and gas. “We cannot change dependence on one murderous dictator for another (…) The only thing we have to negotiate with Maduro is when and how they are going to leave,” Scott said.

Marco Rubio, also a senator from Florida, lamented on Wednesday the actions of the Democratic government, assuring that they undermine the political power of the Venezuelan opposition. “The message that he is sending to the world is that there is no opposition here anymore, and that even the United States itself recognizes that Maduro is the one in charge.”

The legislator was against a possible relaxation of the sanctions on Venezuela and added that an agreement with Maduro could lead the US to once again recognize the Venezuelan leader as head of state.

“Eventually the argument will be that we already recognize the Maduro government, we recognize that the situation in Venezuela has changed,” the Republican responded to the FLY at a press conference.

Democrat Bob Menéndez, who heads the Senate Foreign Relations Committee, joined the criticism of his Republican colleagues. In a statement, the legislator considered that buying Venezuelan oil would perpetuate “a humanitarian crisis that has destabilized Latin America.”

“I would strongly oppose any action that fills the pockets of the oligarchs of the Maduro regime with oil profits,” the legislator said.

Neither the White House nor Miraflores have delved into the content of the conversation between the two governments. Washington assured that spoke of issues of “energy security” and of the Americans detained in Venezuela, two of whom were released on Tuesday.

For his part, President Maduro has assured that both parties have agreed to “work forward on an agenda”, but he did not specify on what issues.

Opposition leader Juan Guaidó said that a lifting of sanctions on Venezuela must go through “real progress” towards a democratic transition in the country. Along with more than 50 countries, the US recognizes Guaidó as interim president of Venezuela since January 2019.

“The lifting of any pressure measure, if it is not oriented towards democratization, would only strengthen the authoritarianism that threatens the world today,” said the Venezuelan leader. it’s a statement.

* With the collaboration of Jorge Agobian and Alejandra Arredondo from Washington DC and Luis Felipe Rojas from Miami.

Abdullahian supports delaying the Vienna talks and Lavrov: Russia does not put obstacles in the way of returning to the nuclear agreement | Politics news

Abdullahian supports delaying the Vienna talks and Lavrov: Russia does not put obstacles in the way of returning to the nuclear agreement | Politics news