The winners in the prestigious Sony World Photography Awards 2021 revealed


The winning photographers in the 2021 Sony World Photography Awards have been revealed – and the images in this year’s winners’ gallery are as fascinating as ever.

The contest runs four competitions – professional, open, student and youth. This year, it received 330,000 entries from photographers across the globe.

The winner of the professional competition, scooping the title of Photographer of the Year 2021 and the $25,000 (£18,201) grand prize, is Scottish snapper Craig Easton for his series of portraits that examine ‘misrepresentation of communities in northern England’ and focus on the tight-knit neighbourhood of Bank Top in Blackburn.

Mike Trow, chair of the 2021 professional competition, said: ‘What is so impressive about this project is the intent, dedication and understanding Craig brings to it. These are not people who necessarily want to be photographed, but Craig gained their trust. They look frankly to camera and we see a mutual understanding between documenter and subject. It is the moral weight behind this work that makes it so important and deserving of this prize.’

The winner in the open competition is Zimbabwean photographer Tamary Kudita for her stunning portrait of a young black woman wearing a Victorian dress while holding traditional Shona cooking utensils.

South African student Coenraad Heinz Torlage is chosen as Student Photographer of the Year for his series on young farmers, while 19-year-old Pubarun Basu from India is Youth Photographer of the Year. His single image shows the shadow of railings projected on to curtains, creating the illusion of cage bars. A pair of hands is seen, as if trying to break through. 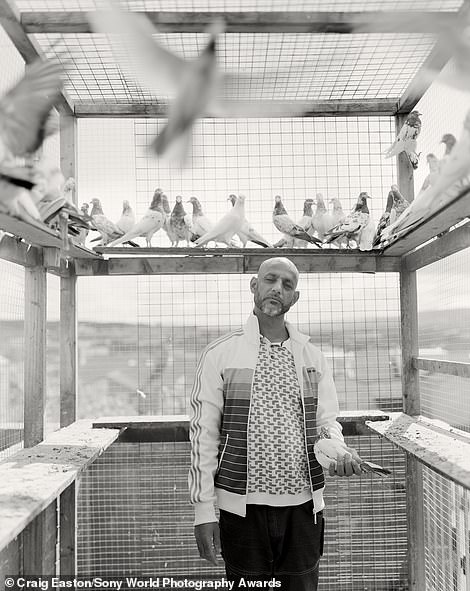 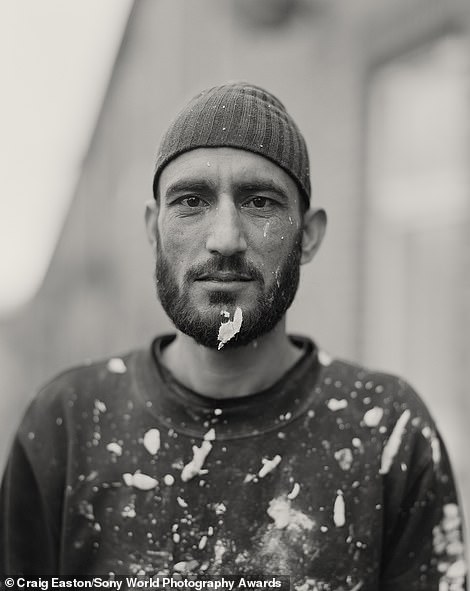 These fascinating portraits were snapped by Craig Easton, who scoops the title of Photographer of the Year in the Sony World Photography Awards 2021. His series of portraits ‘examines the representation and misrepresentation of communities in northern England’ and focuses on the tight-knit neighbourhood of Bank Top in Blackburn 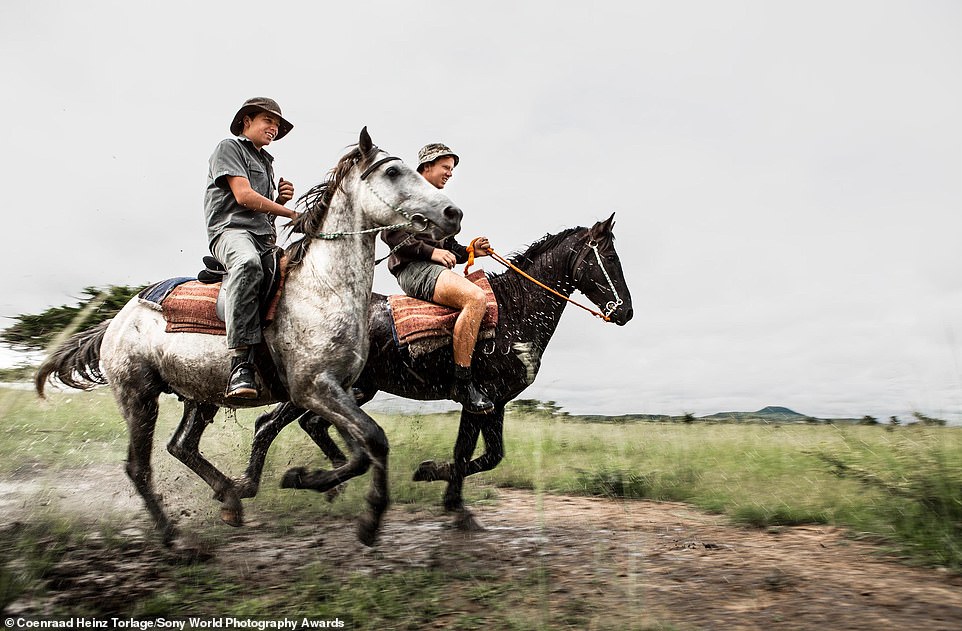 Coenraad Heinz Torlage, a student from South Africa, is the winner of the Student Photographer of the Year award. He impressed the judges with a series of images – called Young Farmers – about the next generation of farmers in South Africa and the challenges they face 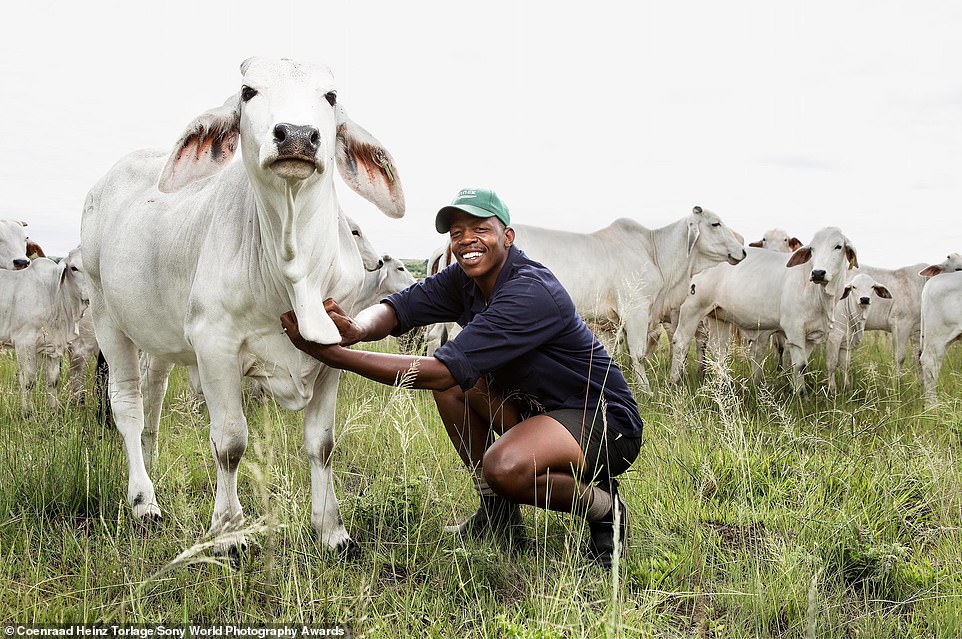 Torlage also captured this scene as part of his Young Farmers series, which he created in response to a brief asking students to depict the way they and their contemporaries see the world and how they plan to change it for the better 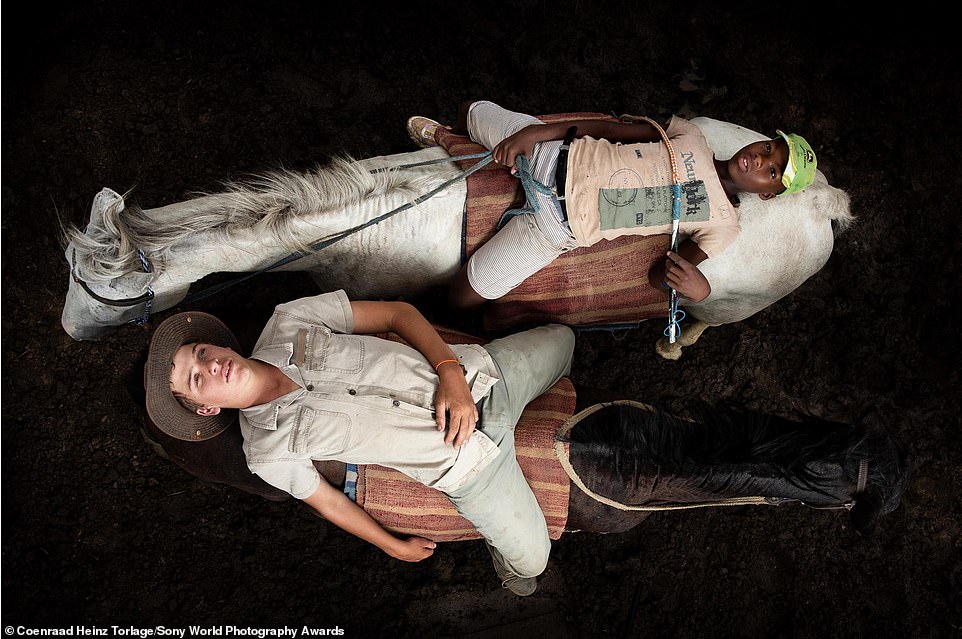 A third fascinating image by Torlage from his Young Farmers series. He said: ‘I often dreamt of winning and prayed that I could share my country and the amazing people in it with the world. I believe in the young farmers of South Africa, which this country needs in terms of food sustainability and ecological awareness. Winning is a dream made possible by the amazing people that I photographed and everyone who helped and supported me’ 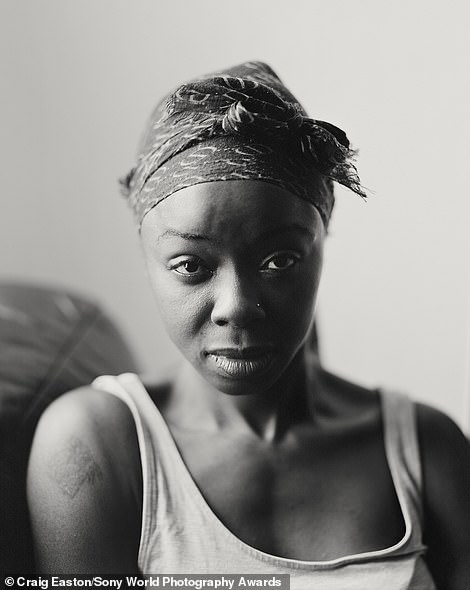 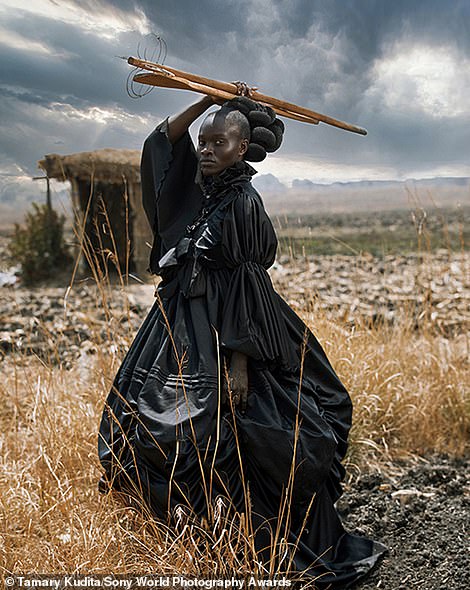 LEFT: Another stunning portrait by Easton, the winner of the professional competition in the 2021 Sony World Photography Awards. Judge Mike Trow said: ‘It is the moral weight behind this work that makes it so important and deserving of this prize.’ RIGHT: This beautiful shot helped Zimbabwean photographer Tamary Kudita land the gong of Open Photographer of the Year 2021. It shows a young black woman dressed in a Victorian dress and holding traditional Shona cooking utensils 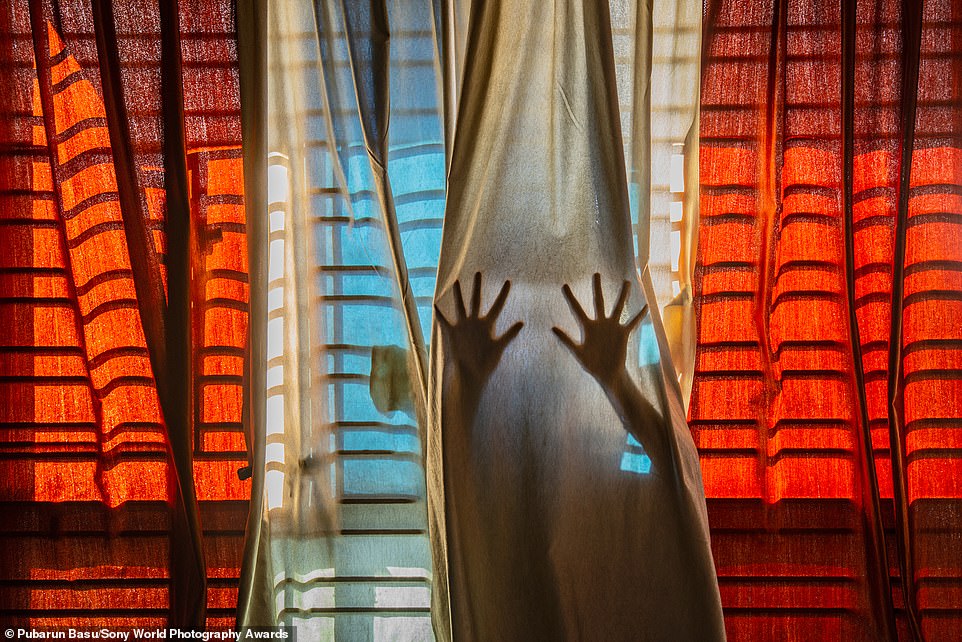 A mesmerising shot by Pubarun Basu, aged 19, who is named as Youth Photographer of the Year 2021. The shadows of railings are projected onto curtains to create the illusion of cage bars from behind which a pair of hands is seen as if trying to break through. It is noted that the illusion of shadows and hands ‘convey a sense of entrapment shared by so many across the world this past year’ 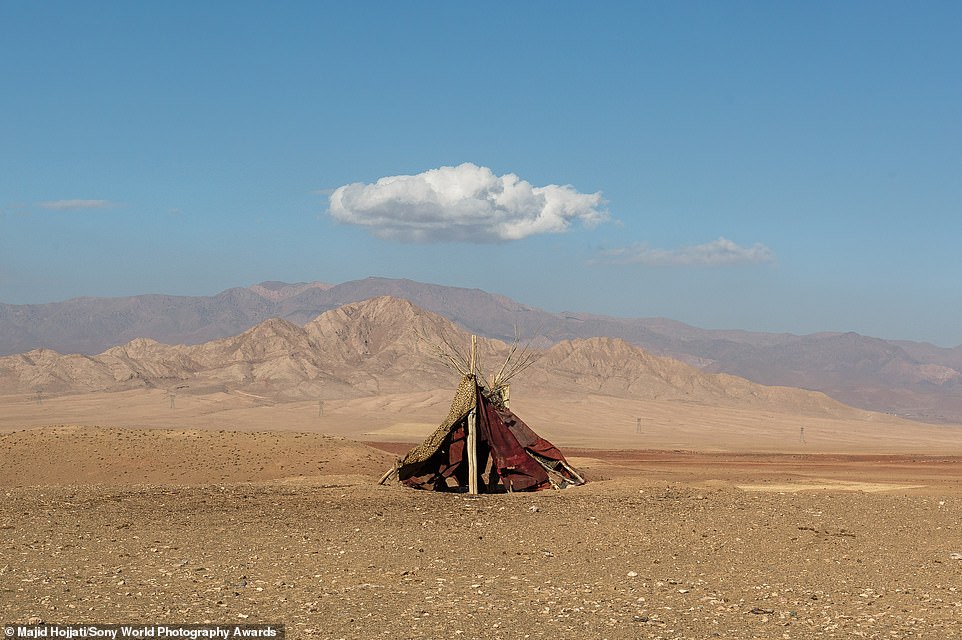 This thought-provoking image was snapped by Iranian photographer Majid Hojjati – the winner of the landscape category in the professional competition. He impressed the judges with a series of photos of deserted structures that ‘in their quiet stillness poetically evoke the stories of those that once inhabited them’. He snapped this photo in Torbat, Iran 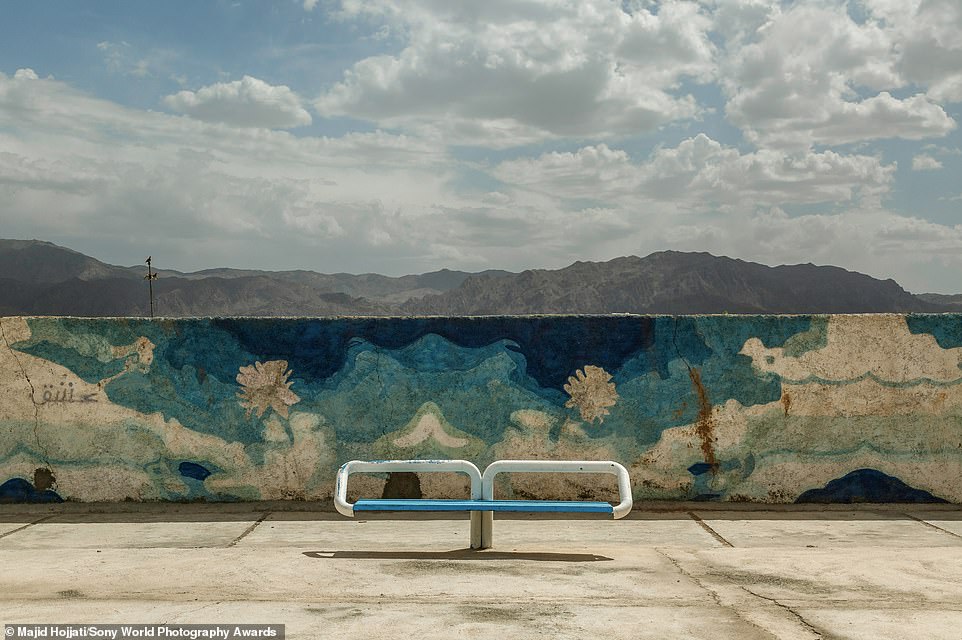 Another image by landscape category winner Hojjati. He called his series of photos of abandoned structures ‘Silent Neighbourhoods’. He took this image in Birjand, Iran 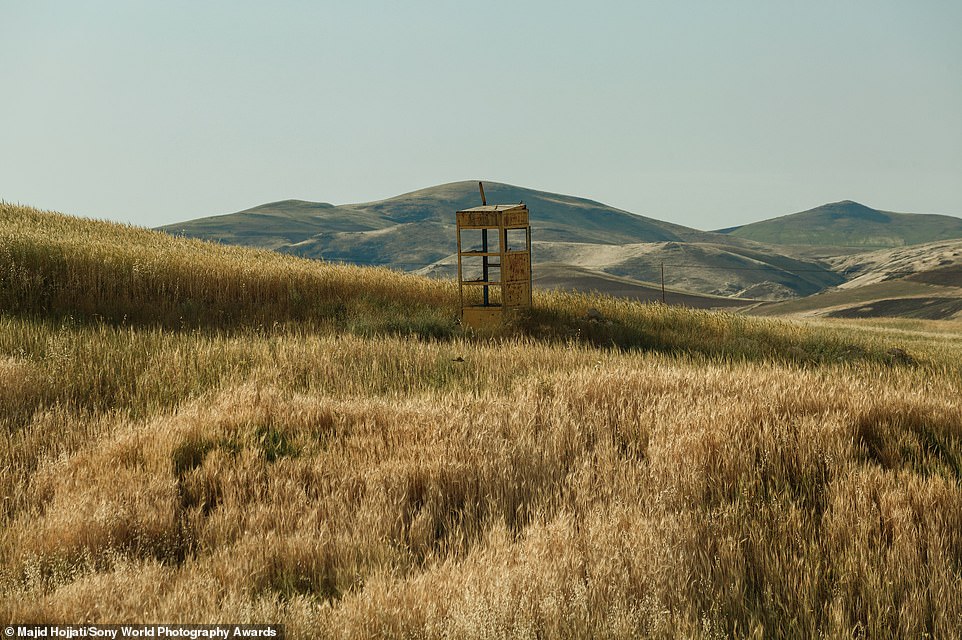 Another breathtaking image by Hojjati in his winning ‘Silent Neighborhoods’ series. He snapped this photo in Arasbaran, Iran 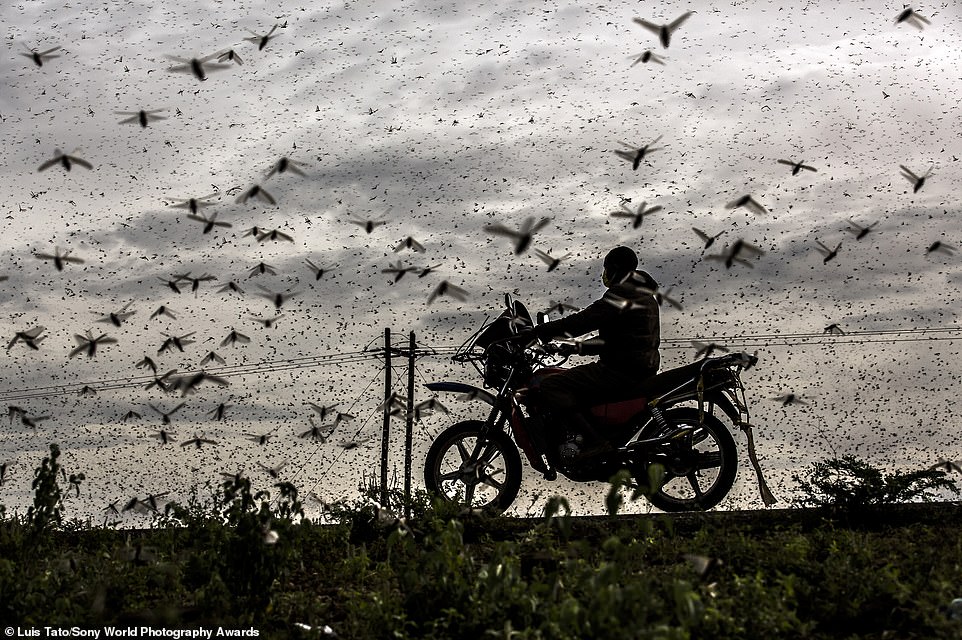 Spanish photographer Luis Tato is behind this incredible image of a motorcyclist surrounded by a massive swarm of locust, which was ravaging an area next to Archers Post in Kenya. He is the winner of the wildlife and nature category in the professional competition 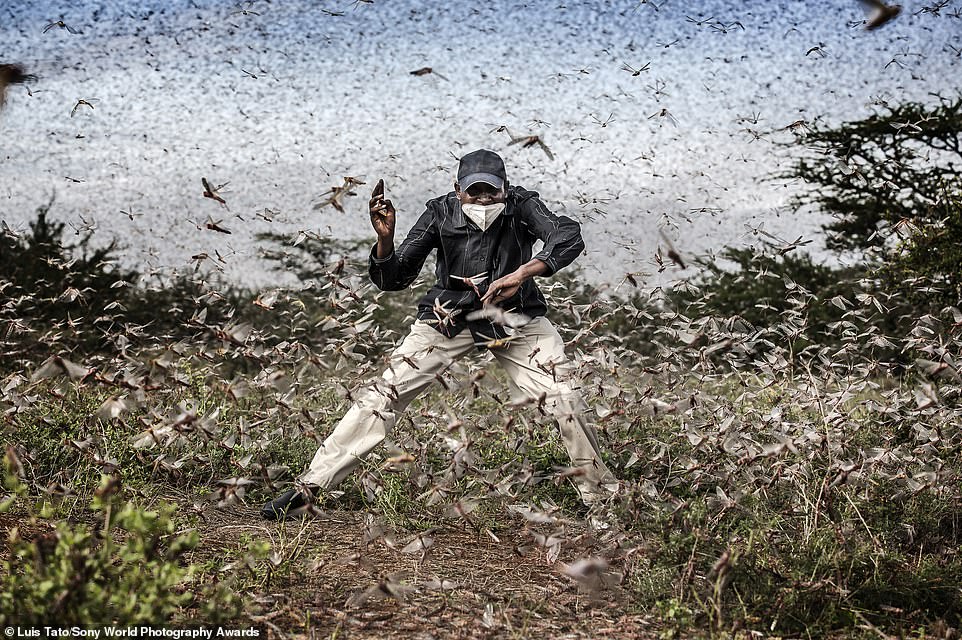 Another amazing image by Tato that shows a man trying to scare away a swarm of locust in Kenya. It is one of several images in a series of photos that documents a destructive infestation of desert locust across East Africa as it wiped out entire fields of vegetation and crops amid the Covid-19 pandemic 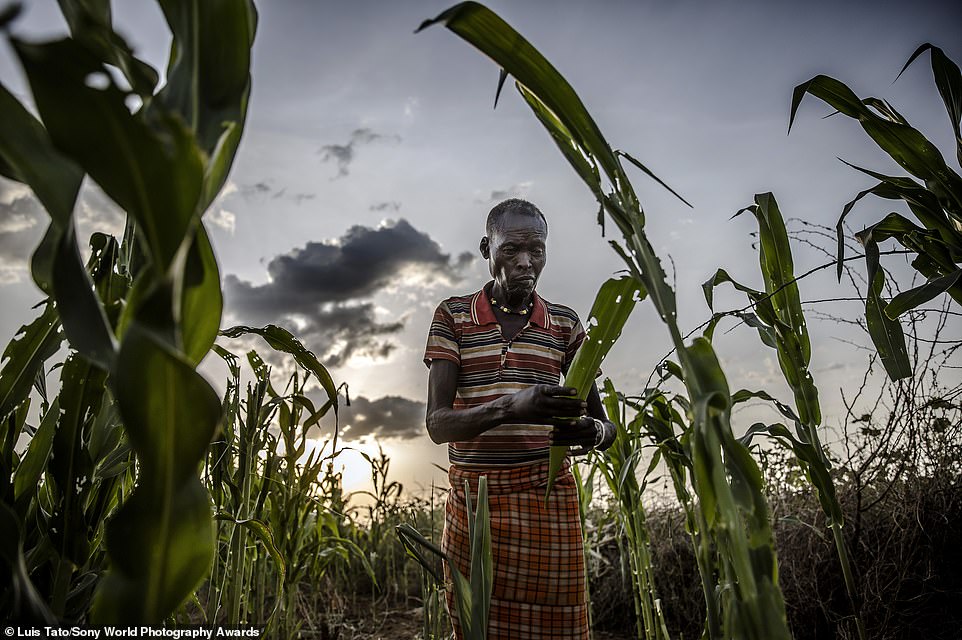 In this sombre image by Tato, 65-year-old farmer Lochom Ekiru assesses the severe damage to his maize crops in Turkana County, Kenya, after bands of desert locust ravaged them. Tato explains: ‘The farmer is a former pastoralist that lost all his cattle due to cattle raiding. After that, he decided to invest his savings and become a farmer. Now, he has tragically lost almost all his maize crops due to the locusts that ravaged them’ 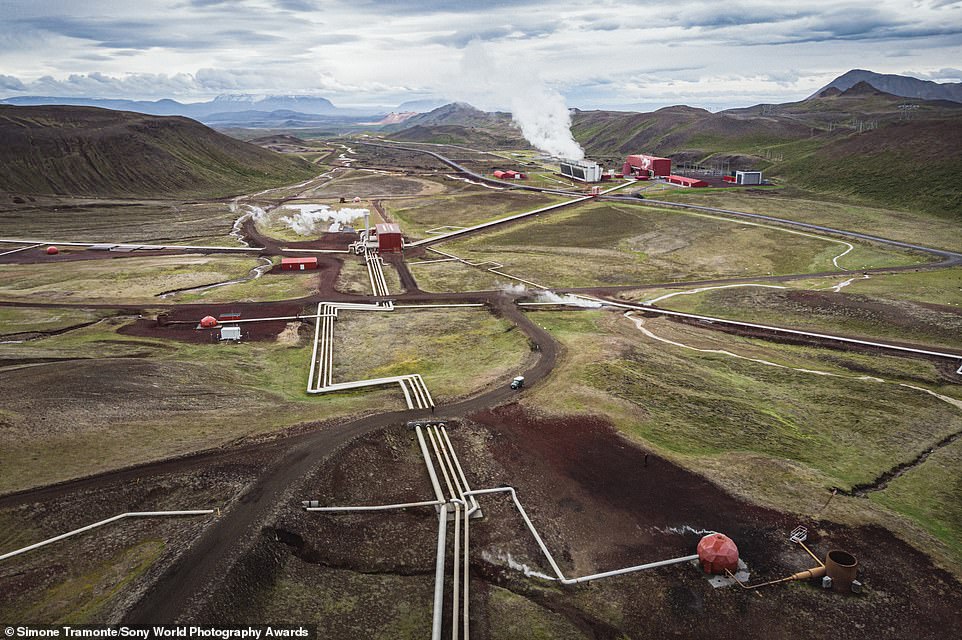 A fascinating aerial shot of the wells and pipes at the Krafla geothermal power station in northern Iceland. It was snapped by Italian photographer Simone Tramonte, who is named the winner of the environment category in the professional competition. He submitted a portfolio of images that explores Iceland – a country that now produces 100 per cent of its electricity from renewable sources 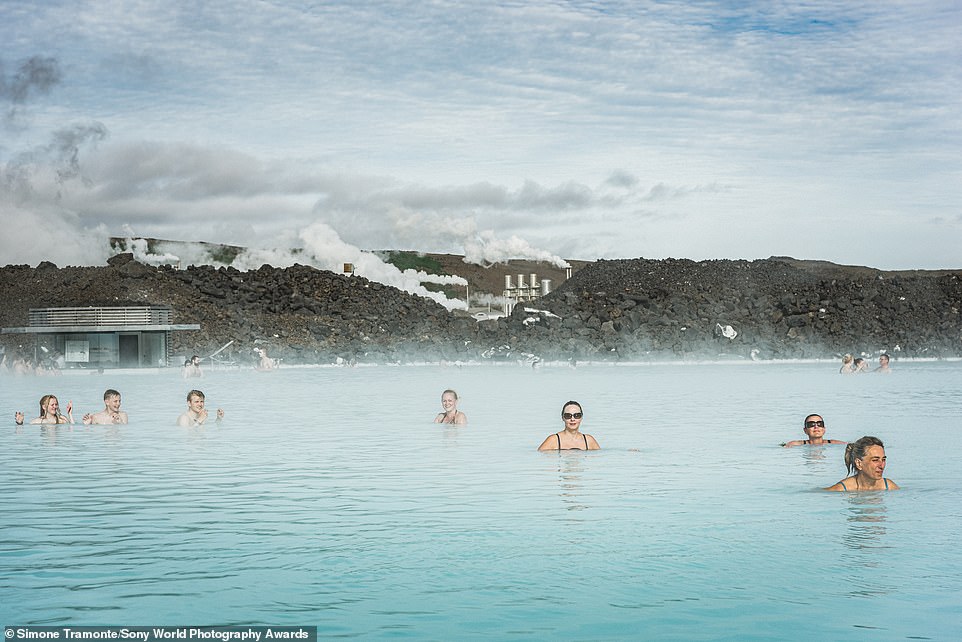 People bathe in Iceland’s Blue Lagoon in another shot by Tramonte. He explains: ‘Geothermal water that has already generated electricity at the Svartsengi Power Station and has passed through a heat exchanger to provide heat for a municipal water heating system is fed into the lagoon. The water’s high silica content keeps it from leaching into the lava field and gives it an appealing aqua tint’ 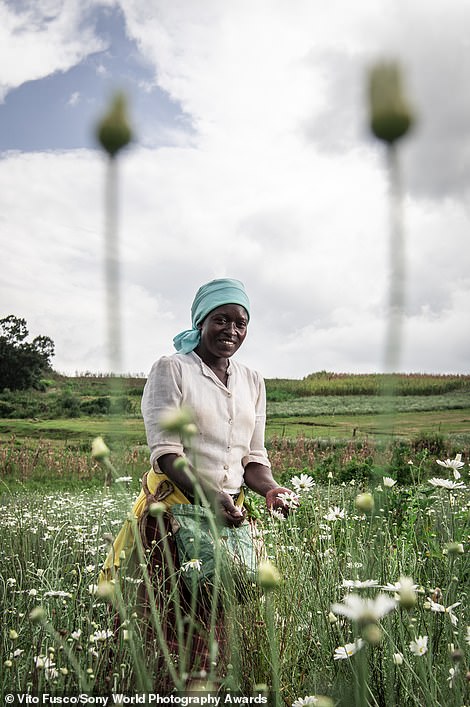 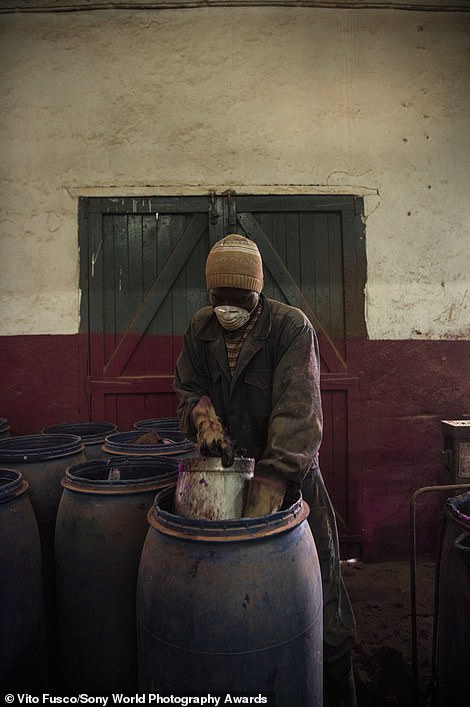 Two striking images by Vito Fusco from Italy, the winner of the documentary category in the professional competition. His winning series of pictures documents the journey of the pyrethrum flower, known as the ‘flower of death’, which is cultivated in the hills of Nakuru, Kenya, as a natural insecticide 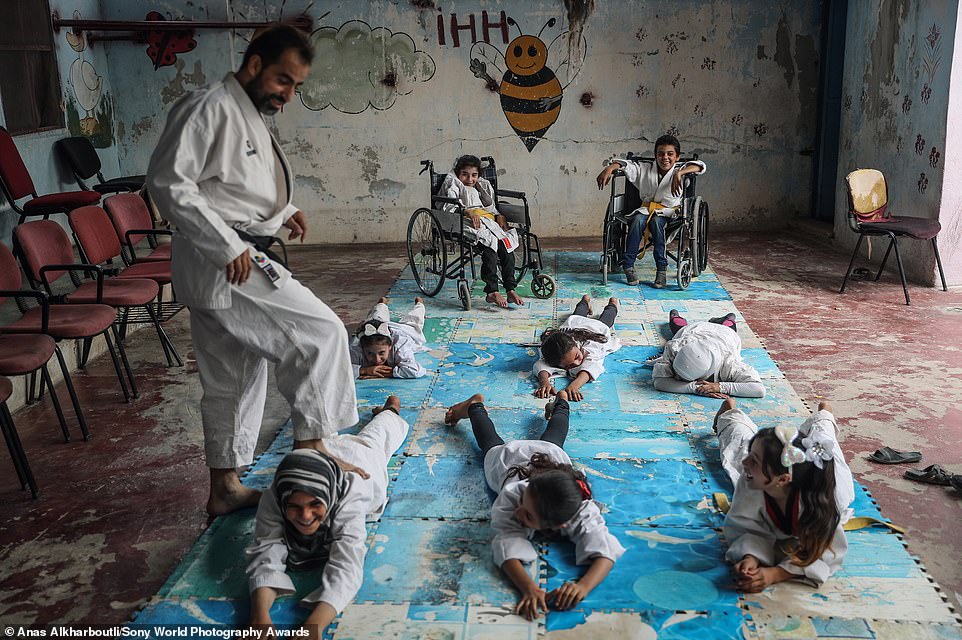 Syrian photographer Anas Alkharboutli is behind this sweet image of children at a karate school in the Syrian city of Aleppo. The school caters for both disabled and able-bodied children. Alkharboutli is the winner of the sport category in the professional competition 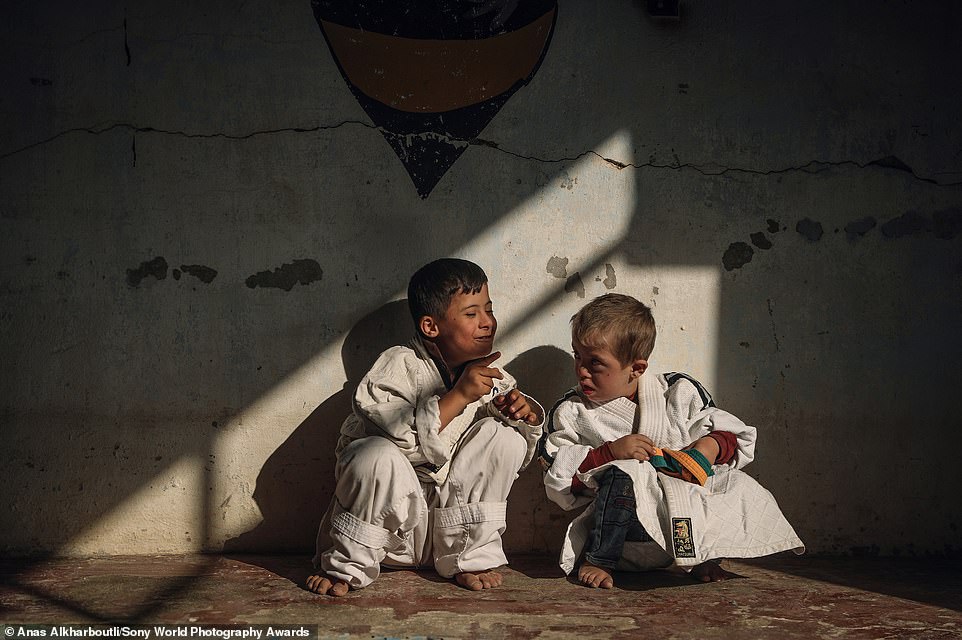 Another image by Alkharboutli from his series of images of the karate school in Aleppo. The school uses the sport to help children overcome the trauma of war

More than half of UK has Covid-19 antibodies