There is no masking the war that will split Britain: could it be more toxic, asks JOHN NAISH


Like millions of people I have been longing for Freedom Day, the day that will mark our return to normality — or as close to it as we can get just now.

But while I welcome the end of social distancing, working from home orders and restrictions on the numbers of people allowed to gather together, I fear one of the more cruel legacies of July 19 will be a divided nation.

For thanks to Boris Johnson’s decree yesterday that face masks will no longer be mandatory on public transport, in shops or pubs and bars etc, and that people can decide for themselves when and where to wear masks, Britons are now condemned to split into two hostile tribes. 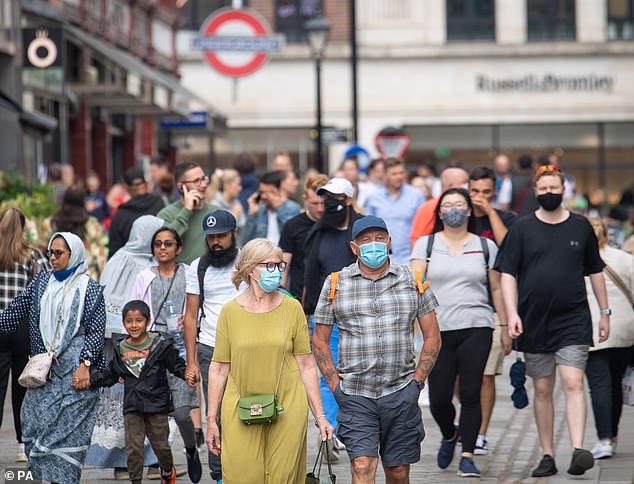 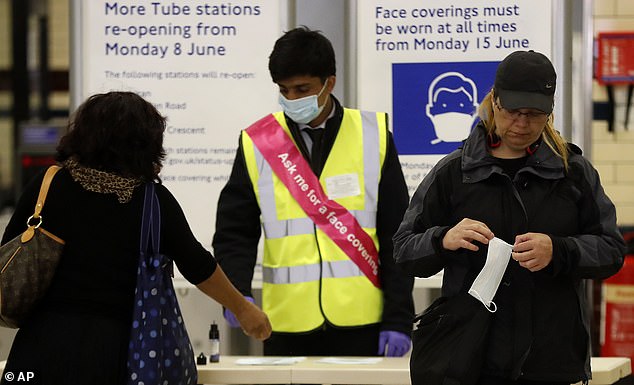 If you think that’s an over-reaction, then I would point you in the direction of all the evidence that already shows the two factions cannot ever co-exist peacefully

It will be the mask-wearers who believe they are protecting themselves and others from contracting or transmitting Covid-19 versus those who eschew such face coverings entirely.

If you think that’s an over-reaction, then I would point you in the direction of all the evidence that already shows the two factions cannot ever co-exist peacefully.

Instead, their respective presence out in the community will generate a toxic atmosphere of acrimony, distrust and quite possibly violence. And that is the very last thing this country needs as we rebuild lives and livelihoods.

At the weekend, Housing Secretary Robert Jenrick declared that after Freedom Day ‘the State won’t be telling you what to do — but you will want to exercise a degree of personal responsibility and judgment’.

But mask-wearing is not a matter for individual responsibility and judgment. The scientific picture on Covid transmission is, I believe, far too confused for millions of us to be left simply to judge and decide for ourselves.

Want a leading scientist to back your opinion, be it pro or anti-mask? Take your pick.

Professor Susan Michie, of University College London, who is a member of the Government’s Scientific Advisory Group for Emergencies (Sage) committee (and a member of the Communist Party), maintains that the need for masks should stay ‘forever’.

On the other hand, Dr Mike Tildesley, a member of the Scientific Pandemic Influenza Group on Modelling, which provides data to Sage, says that July 19 is ‘probably the right time’ to consider ending the wearing of face masks.

‘I think if we are going to remove them, July 19 — when we are seeing really low numbers of hospital admissions and low numbers of deaths — is probably the right time to consider it,’ he told the BBC.

Such disagreements between experts are precisely why, for the past 16 months, we have depended on ministers to make their best decisions, based on all the conflicting evidence and opinions, and then lay out clear rules to which all of us must abide. 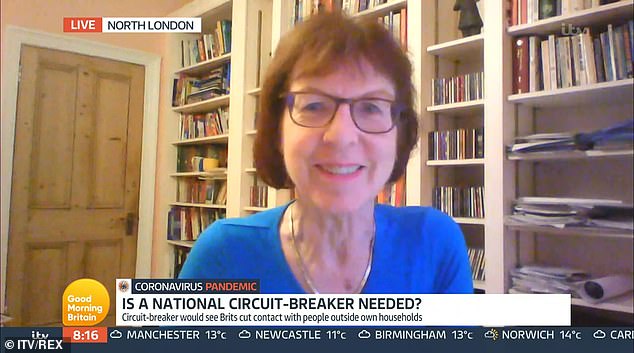 Professor Susan Michie, of University College London, who is a member of the Government’s Scientific Advisory Group for Emergencies (Sage) committee (and a member of the Communist Party), maintains that the need for masks should stay ‘forever

Now we are about to be cut adrift into a world of warring factions, where mask-wearers may be viewed as individuals who aren’t prepared to live with Covid and who remain permanently fearful of it.

Meanwhile, mask-ditchers are seen by the other side as socially irresponsible, selfish and reckless.

According to a YouGov poll yesterday, 71 per cent of Britons thought face masks should continue to be mandatory on public transport and 66 per cent thought the rule should also remain in shops.

Realistically (allowing for backsliding and the fact that people often pick the ‘nicer’ answer to give pollsters), I reckon this means at a rough estimate around half of us will want the security of a mask. The other half will gleefully throw theirs on the fire.

But while Government policy may be to end mandatory mask-wearing from July 19, in practice it won’t be that simple. Public places such as shops, pubs and restaurants can write their own rules on whether mask-wearing is compulsory within their doors.

‘You don’t have to wear masks,’ a Government spokesman confirmed. ‘But if shops, pubs or restaurants demand that you do, we will advise people to be mindful of that and stick to it, because it is their premises.’

The result will sink us into a morass of conflicting micro-rules with varying degrees of enforcement applied.

Who would want to be a barman, shopworker, waiter or doorman in a fortnight’s time, when confronted by irate individuals from either faction? Mask wearers infuriated by what they see as a lack of consideration by non-mask wearers and non-mask wearers irritated by those who remain cowed by Covid.

The daily commute will become another battleground. Some transport bosses are already declaring that they may still make mask-wearing mandatory in places such as the Tube. And unions are warning that members may well refuse to work on non-masked public transport.

Pity the poor guards or station officials confronted by those who disagree with masks. Enforcing localised rules is too much to ask of any worker on low pay and with no training in self-defence or riot control.

Even in the depths of national lockdown, Britain was scarred by attacks over mask disagreements on public transport and in takeaways. In December, a middle-aged man suffered a punctured lung in an assault at a railway station in London after he asked two fellow passengers to put on their face masks.

At Harrods last month, a woman was filmed spitting at a security guard who had tried to enforce the department store’s rules.

As for air travel, yesterday Ryanair declared face masks will remain compulsory on its flights. This is the same airline that last month saw a flight descend into chaos when an Italian woman violently attacked another passenger and had to be forcefully removed from the plane, after she had been asked to wear her mask.

Sadly, I suspect such incidents will become common.

As for anyone who crosses the border from England to Scotland, even more confusion awaits. The Scottish government has said that there will be an ‘ongoing need’ for mask wearing after August 9, when Scottish lockdown is set to ease, particularly in public spaces, such as shops and public transport.

What is legal in London will be a crime in Edinburgh.

It all seems a world away from life pre-Covid, when the only mask-wearers that we ever saw on our streets were tourists from Southeast Asia, who wore them to protect against colds, flu and pollution on their travels.

How curiously and sceptically we gazed at them. 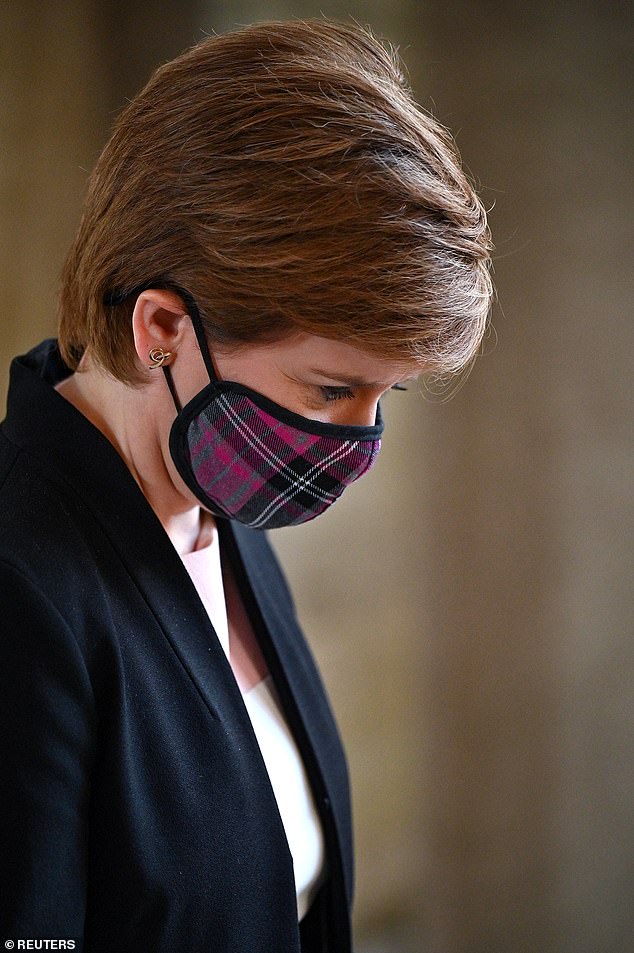 What is legal in London will be a crime in Edinburgh. It would be a cruel irony if face masks become a divisive disaster because a Government that had become rather fond of restrictive diktats decided, in this instance, to walk away from its responsibility and leave the rest of us to fight it out in public spaces

Now however, love them or hate them, those little pieces of cloth have become a totem of the Covid pandemic.

If we are either to ditch them or keep them, I believe we need clear and decisive guidance to which we all can adhere, not this halfway-house hotchpotch of flimsily wavering suggestions.

Strong, clear leadership is essential at a time when our nation desperately needs — post-Brexit and (hopefully) post-Covid — to stand united in rebuilding the country’s economy.

It would be a cruel irony if face masks become a divisive disaster because a Government that had become rather fond of restrictive diktats decided, in this instance, to walk away from its responsibility and leave the rest of us to fight it out in public spaces.

Bjorn Borg's son Leo,18, makes a winning start to his career at Wimbledon

‘Black Widow’: Marvel’s long-awaited release of the movie is a triumphant moment for the industry

NBA bosses risk the wrath of LeBron and co after giving the go-ahead to KEEP the...