This is the terrifying moment a brave couple confronted three masked men who charged at them with a giant power tool while trying to steal their vehicle’s catalytic converter.

Marta Fernandez-Aneas, 37, and her fiancé Amjad Reza Mehdi, 44, were alerted by a noise coming from the driveway outside their Bristol home on Monday night.

They realised what was happening and as Ms Fernandez-Aneas began filming the criminals, one charged at the couple on their doorstep with a power tool. 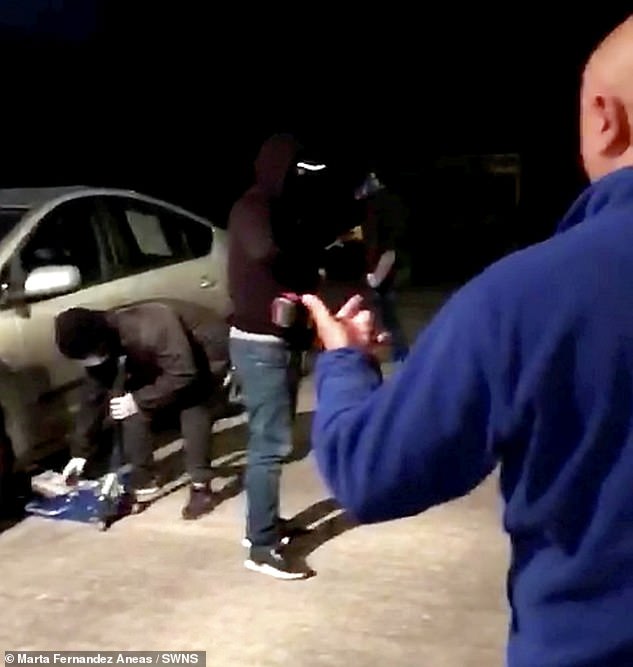 Three thieves targeted the car belonging to Marta Fernandez-Aneas, 37, and her fiancé Amjad Reza Mehdi, 44, outside their home on the outskirts of Bristol on April 26 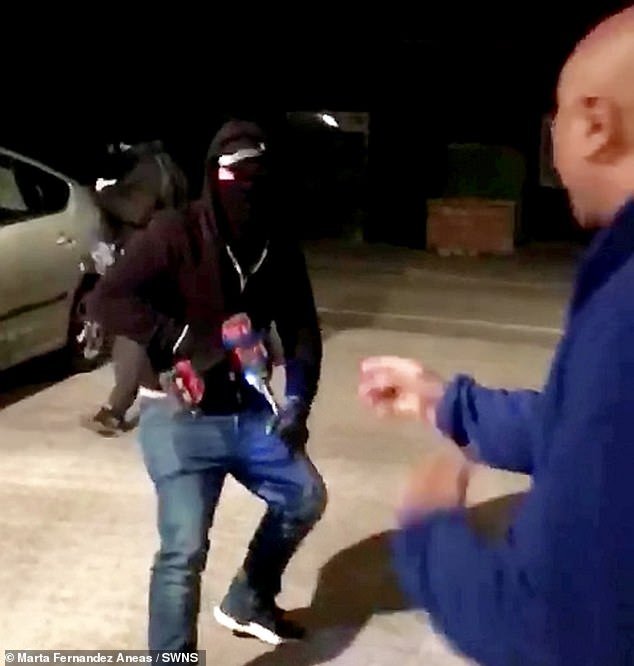 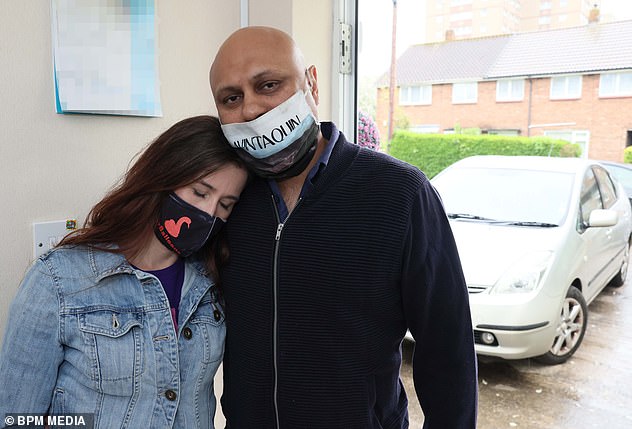 In the footage Ms Fernandez-Aneas can be heard screaming as she runs back inside, where their three-year-old son was sleeping upstairs.

Mr Mehdi however stands his ground and asks them what they are doing, before warning them that the police are coming.

Undeterred, the drill-wielding thief again lunges for Mr Mehdi, but the brave father once again stands his ground, and puts his fists up.

Realising the clock is ticking, the three criminals soon make a run for it and escape in their car.

The couple try to get the car’s registration number but the trio leave their boot open so they cannot see it.

Reflecting on what happened, Mr Mehdi said: ‘I don’t know if I put us in harm’s way.

‘They charged at my other half, I felt they might end up hurting her.

‘I thought if I get any of this wrong, they could kill me. It’s not hard when you’ve got power tools and three people – they could have finished me off.

‘It’s all adrenaline – just impulsive. You’re not thinking at all about what you’re going to do – you just react. I wouldn’t recommend doing that to anyone.

‘I’ve grown up in a rough area so it’s not the first time I’ve seen this. It’s a matter of trying to do what you can in the safest way.

‘That is not easy to judge – it can go wrong. You hear about these heroes being killed all the time.’

The couple described hearing noises outside their Henbury home shortly after Ms Fernandez-Aneas returned from work around 9.30pm on April 26. 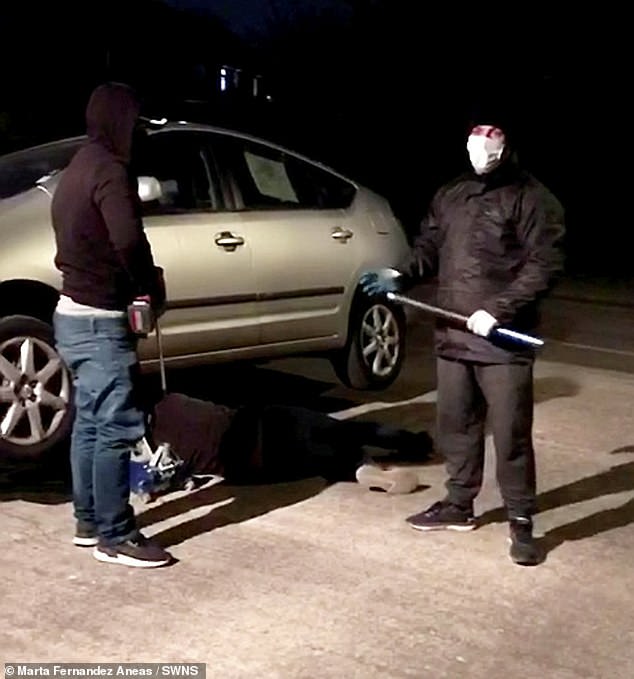 The criminals had jacked up the couple’s Toyota Prius to get easier access to the catylitic converter underneath, causing up to £1,500 in damage

The pair then came face to face with three masked men holding powerful machinery, including a large power tool and car jack.

Musician Mr Mehdi said one of the men told her that he was sent out because they had unpaid bills.

But within seconds, they realised it was all a ploy and the man was really trying to ‘distract’ from the incident taking place.

After verbal exchanges one man charged at Ms Fernandez-Aneas, who runs her own balloon modelling business, causing her to scream as she ran into their home. 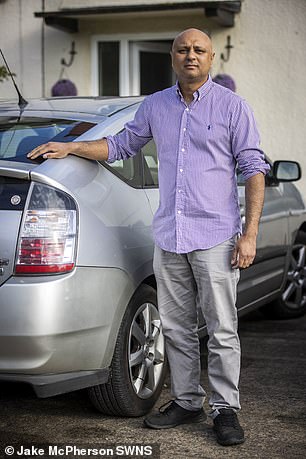 Mr Mehdi, pictured standing beside his Toyota Prius, was threatened with a power drill by one of the gang members

But the threat of being filmed did nothing to deter the thieves. Instead, the men stood nearby while aiming their tools at the couple who kept asking them to leave.

Mr Mehdi said the men charged at them multiple times even after the couple had informed them that the police were on their way.

At that point he said he had no choice but to try and defend his family and stand his ground after one of the men lunged at him with a drill.

‘I went out to see the noise was – I thought maybe someone needing help or someone broken down,’ Mr Mehdi said.

‘I didn’t think it was a crime in progress. When I went out saw them, one of the lads said: “You haven’t paid your bills,” in what I think was an Irish accent.

‘That distracted me for a few seconds and then I stared shouting and swearing at them.

‘The mechanic who inspected the car for damage the following morning explained that for these gangs – in some cases it is a simple as putting high vis vests on and going around a supermarket car park putting cones out.

‘People think it’s a mobile mechanic doing a repair, they jack the car off and nobody cares.’

The pair moved to the area five years ago and have no relatives nearby for additional support. The ordeal has left the couple traumatised.

‘We haven’t slept,’ Mr Mehdi said. ‘Any little noise and we think it’s them again. 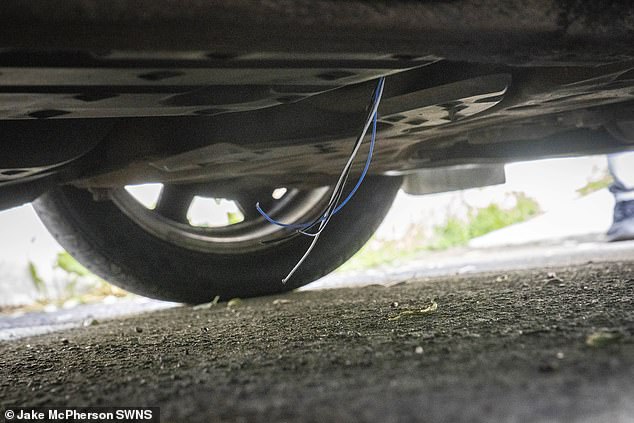 ‘The reality is our car hasn’t got a converter on now because it’s waiting for a repair. They can just come back and rinse and repeat once the new one is fitted.

‘All they need to do is leave the boot up to hide the plate – they’ve been doing it for months.

‘We did think, “God what have we got ourselves into?” We thought we were wrong about everything.

‘We thought have we moved to the wrong area? Have we got mistaken identities? Has someone got a grudge?

‘But since talking to the police we’ve realised this is happening all over the place. It’s not area specific, it’s not family specific.

Mr Mehdi said their insurance company said the costs of replacing the catalytic converter will most likely be over £1,500.

A spokesperson from Avon and Somerset confirmed they are investigating the attem pted theft.

Officers said the criminals fled the scene in a blue vehicle.

Anyone with information that could assist officers with their inquiry is asked to get in touch by calling 101, quoting crime reference number 5221089920.

Catalytic converter thefts are at an all-time high, with a 44 per cent increase in claims in 2020, compared to 2019, new research has revealed.

Thefts remain high so far in 2021 with a 57 per cent increase in claims for catalytic converter thefts in March this year compared to the same month last year, according to data from Admiral Insurance.

The insurer is warning motorists to be vigilant as the figures show no sign of slowing down.

Prices can be high with the average cost of a claim for a stolen catalytic converter coming in at more than £1,500, depending on the amount of damage the thieves caused and the type of car targeted.

Catalytic converters make up part of the exhaust system in some cars and they process the emissions from a combustion engine into less harmful gases.

Thieves target them for the precious metals including gold, platinum and palladium that are used within the catalytic converters in some cars, which are then sold on for profit.

Currently, palladium is more valuable than gold, and platinum is worth around two thirds the value of gold.

Cars including the Honda Jazz, Toyota Prius, Toyota Auris and Lexus RX are targeted most often, with older models in particular being singled out.

Hybrid cars are targeted the most because their catalytic converters contain a higher concentration of precious metals and are generally less corroded.