Transport yourself, in these sad days of silenced theatres, to a full-house Old Vic on the evening of April 11, 1967.

It’s the opening night of Rosencrantz And Guildenstern Are Dead, first performed the previous summer at the Edinburgh Fringe where it had terrible reviews (‘sub-Beckett’, ‘sub-Pinter’), apart from one single rave one, which was enough to rescue both it and its creator Tom Stoppard from oblivion.

In the interval, he heard one man mutter to his wife, ‘I do wish they’d get on.’ Stoppard left, and spent the rest of the play in the pub, returning just in time for the end. The applause was rapturous. 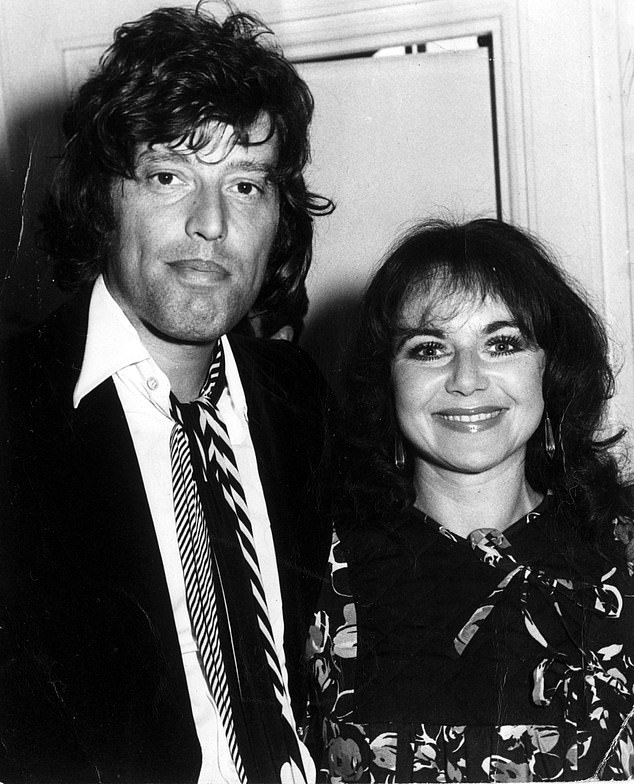 Tom Stoppard A Life takes a look at the eventful life from fleeing Czechoslovakia with his family at the age of one to his complicated love life. Pictured with his second wife, Miriam Moore-Robinson, who was a close friends with him and his ex-wife 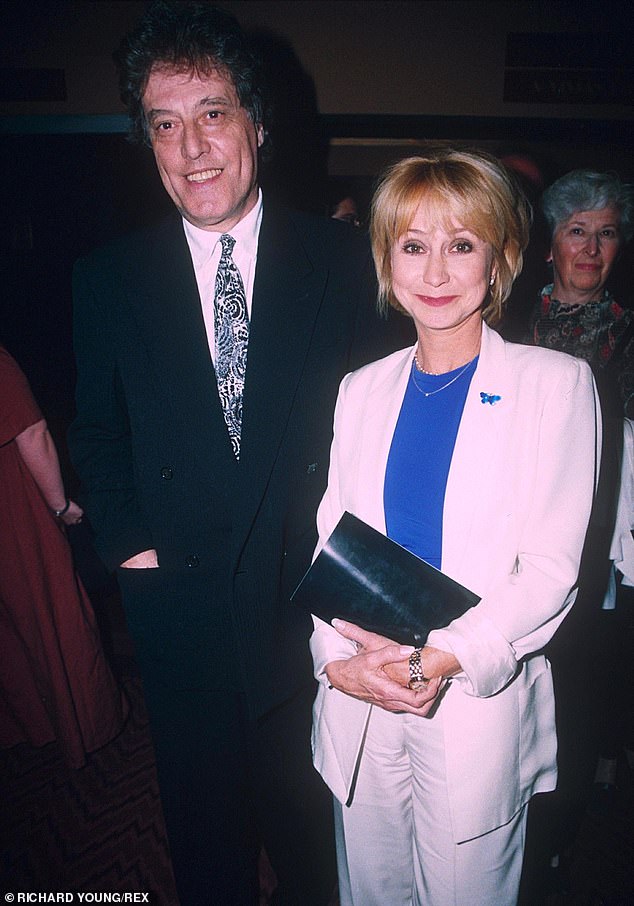 During his life he had two ten-year love affairs, first with Felicity Kendal (who was married to theatre director Michael Rudman, to whom she later returned) and then with Sinead Cusack while she was in a ‘turbulent and dramatic’ marriage to Jeremy Irons. Pictured, Stoppard and Kendal together at the Adelphi Theatre in 1997

After the first-night party he bought the next morning’s papers — the reviews were ecstatic.

Quite a reversal of fortunes for the little Jewish boy Tomas Straussler, who in 1939, aged one-and-a-half, had fled with his parents and brother from Nazi-occupied Czechoslovakia to Singapore.

When the Japanese invaded, he, his mother and his brother escaped to Colombo, Sri Lanka, and then India. Tom’s father was killed on another escaping ship that was bombed.

Just one of millions of shattered, dispersed middle-European assimilated-Jewish families; and it was not till much later in life that Tom discovered that his grandparents and aunts had been murdered in the Holocaust.

At the Mount Everest Hotel in Darjeeling, his widowed mother met Major Kenneth Stoppard, a square man who turned out to be xenophobic and anti-Semitic, but who offered the family security in England. They married in 1945. Thus the Czech boy became Tom Stoppard.

He embraced all things British, from cricket to fly-fishing to the Royal Family to (most enthusiastically) the language with all its punning possibilities. He relished writing lines such as, ‘The days of the digital watch are numbered.’

What a shot in the arm this sparkling, warm-hearted biography of Stoppard by Hermione Lee is! It’s 860 pages long (my heart sank when it landed on my knee), but you’re swept along with Stoppard’s boundless creative energy, and get caught up in his rich, varied, fizzing life.

He has always been anxious; has never taken his success for granted. 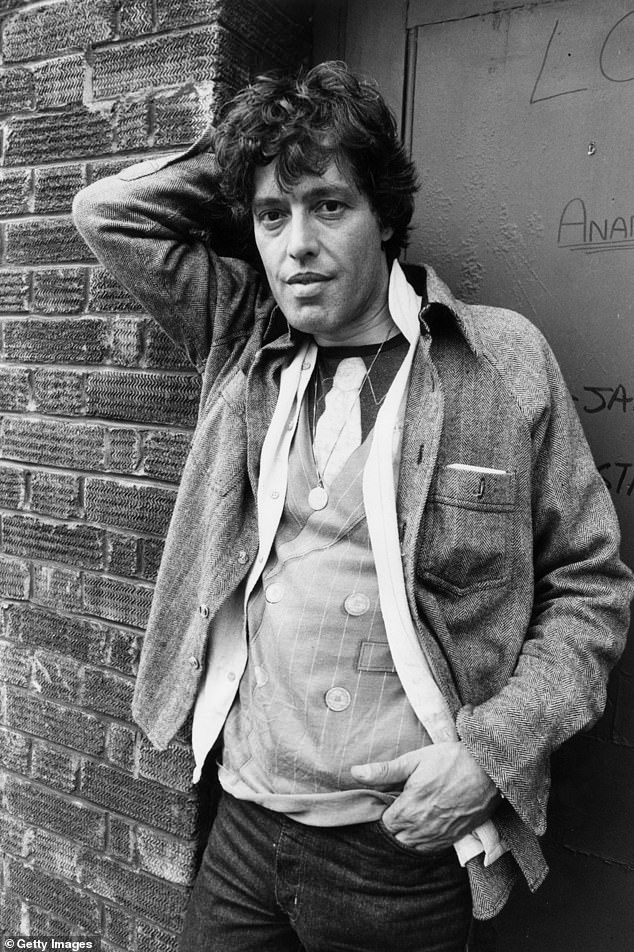 At the Mount Everest Hotel in Darjeeling, his widowed mother met Major Kenneth Stoppard, a square man who turned out to be xenophobic and anti-Semitic, but who offered the family security in England and Thomas took his surname

Amazingly, in 1967, he’d just had his first novel published and had high hopes for the novel and low expectations for the play.

The novel sold 688 copies in the first five months. The play turned out to be the first of a string of blazing theatrical triumphs performed by top actors all over the world — although there have always been some who have pronounced his plays ‘too clever by half’ or, as one person recently wryly summed up the entire Stoppard oeuvre: ‘a play within a play within a drama GCSE syllabus’.

He had to work hard to prove he was more than just a clever-clogs genius at mental and verbal acrobatics; that he had a heart.

It was his second wife Miriam who advised him to write a ‘love play’, The Real Thing.

‘The Tin Man had a heart after all,’ reviewers discovered. But when Stoppard and Miriam separated after 20 years of marriage, he said to her, ‘But Miriam, I loved you so much.’ And she replied, ‘Really? You never told me.’ So, heart or no heart? 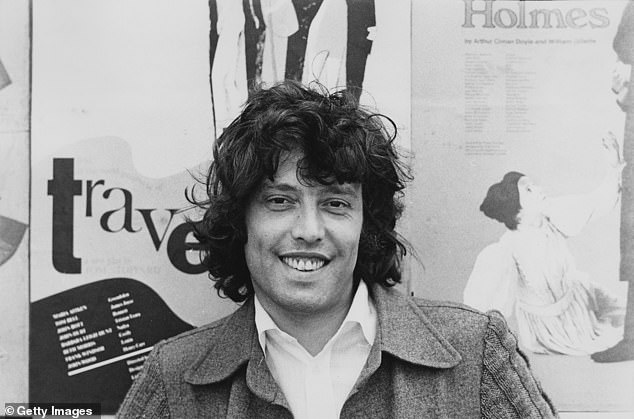 In 1967, Thomas had his first novel published and had high hopes for the novel and low expectations for the play. The novel sold 688 copies in the first five months but the play was a huge success

Well, if you read this book, you’ll see a full, pumping organ of emotion and empathy, and will get to know a kind man who wrote letters to his mother every week till the day she died, but who also had a deep need to be alone to think and create those mind-bending plots, at his desk, while smoking.

In his first London lodgings in the early 1960s, he tore the sandpaper off a matchbox and glued it to the desk, so he wouldn’t need to put his pen down for a second to light up.

It was while living here as a young theatre critic that he started dating a co-lodger, Jose Ingle.

They married, moved to a thatched cottage in Marlow, Bucks, and had two children, Ollie and Barnaby, but as his success took off, Jose became possessive, then clinically depressed, drinking a bottle of Pernod a day. 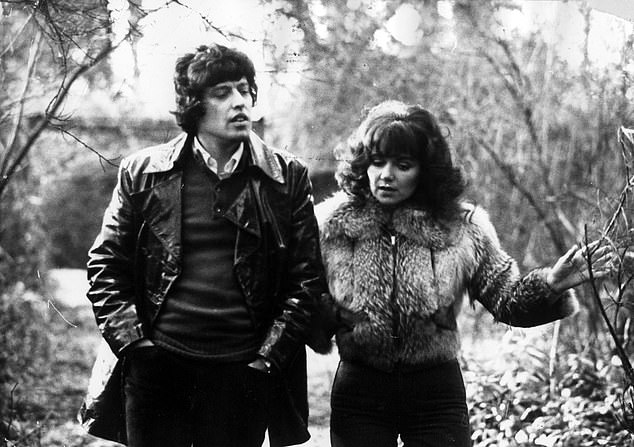 Stoppard started up an affair with Miriam, a doctor, while he was married to his first wife Jose. Miriam was friends with both him and Jose. Pictured, Thomas and Miriam 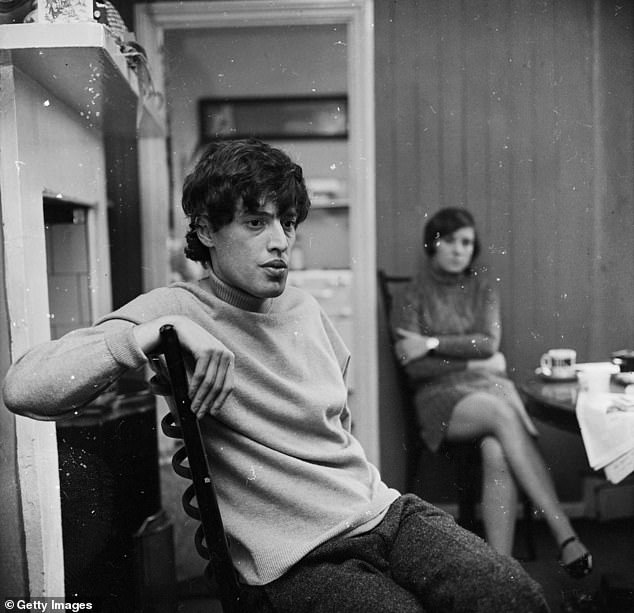 Stoppard met his first wife at his first London lodgings in the early 1960s when he was working as theatre critic. He later married the co-lodger Jose Ingle (pictured with Stoppard at their home. 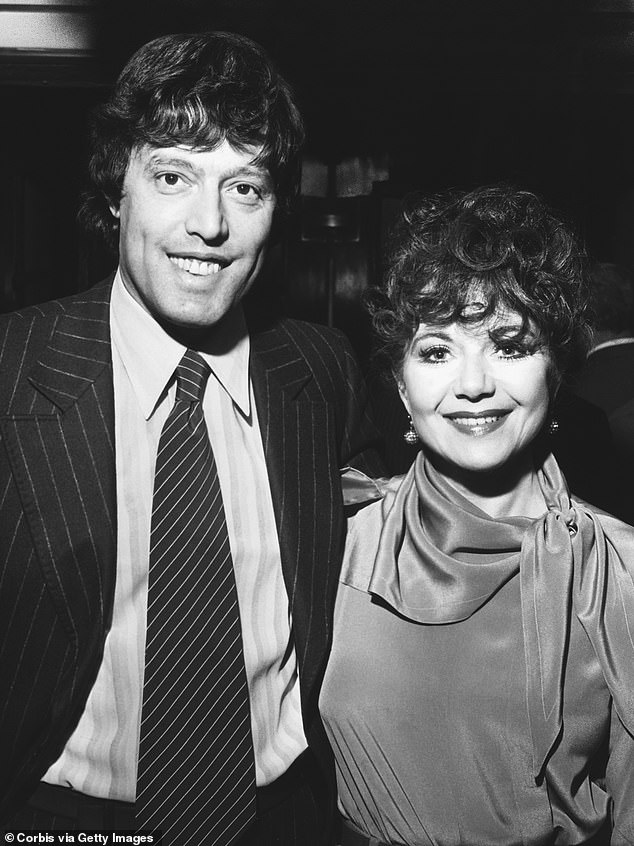 During their affair, Thomas and Miriam would write love letter to each other and Jose found the and began cutting them up and demanded Miriam and Thomas come home from the London restaurant they were at

Lee conveys the crackling sexual chemistry that started to develop between Stoppard and a close married friend of theirs, Miriam Moore-Robinson.

They started writing love letters in a state of ‘fearful, ecstatic excitement’. Alone one evening, Jose found Miriam’s letters and started cutting them up, summoning both Miriam and Tom, who had to dash home from a London restaurant.

‘Isn’t it wonderful, darlings, we’re together!’ Miriam gushed to their friends after they moved into a new home together with his children.

Stoppard — who would support Jose financially for the rest of her life — was relieved to be with someone ‘independent, charismatic and competent’.

Miriam was a successful doctor and businesswoman. She felt a bit of a misfit at luvvie parties held by leading London theatre critic Kenneth Tynan — until she started asking actors to tell her about their ailments.

‘This relationship should be one that lasts,’ I thought. All the right boxes were ticked: lovely home, clever wife, two more sons, all living happily together in a beautiful house in Buckinghamshire. Then Miriam suggested they trade up to a grander house down the road, Iver Grove, which Stoppard soon nicknamed ‘the Iver Grove Leisure Centre’ because it had a pool, tennis courts and a cricket pitch, and cost a fortune to keep up. 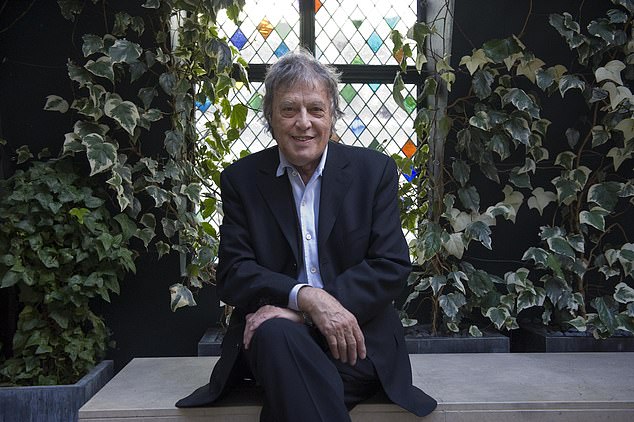 Stoppard — who would support Jose financially for the rest of her life — was relieved to be with someone ‘independent, charismatic and competent’ 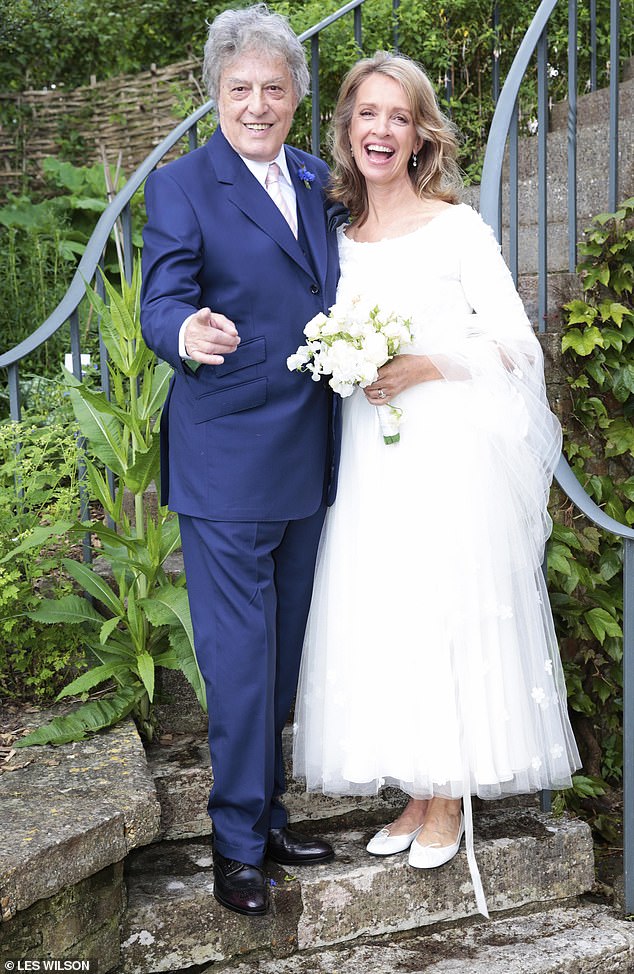 In 2014, Stoppard married Sabrina Guinness, wealthy daughter of the banking branch of the Guinness family, and they live happily in Dorset. Pictured, the couple on their wedding day at Wimborne Registry Office

The drive to make more money sent them both flying around the globe. They passed each other in mid-air, in their frantic, high-earning lives, missing their sons’ school matches.

Stoppard took on the job of highly paid (but mostly uncredited) dialogue-improver for Hollywood blockbusters ranging from Star Wars to 102 Dalmatians to fund the family’s expensive existence. This lifestyle drove the marriage into the ground.

They separated in 1988 and Stoppard moved, with some relief, to a quiet flat in Chelsea. (‘Silence is the sound of time passing,’ is another of his immortal lines.)

He then had two ten-year love affairs, first with Felicity Kendal (who was married to theatre director Michael Rudman, to whom she later returned) and then with Sinead Cusack while she was in a ‘turbulent and dramatic’ marriage to Jeremy Irons — who knew about the affair.

Both those relationships, thrilling when Stoppard was directing his lovers in parts he’d written for them, burned themselves out. The one with Cusack ended when she was reunited with the son she’d given up for adoption, and turned her attention to him. 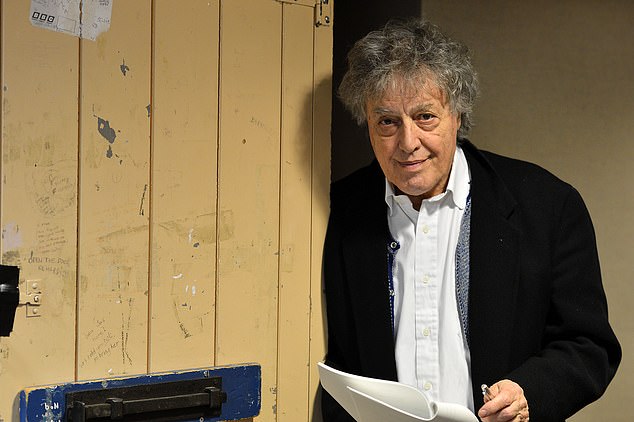 Stoppard and his second wife Miriam separated in 1988 and he moved, with some relief, to a quiet flat in Chelsea 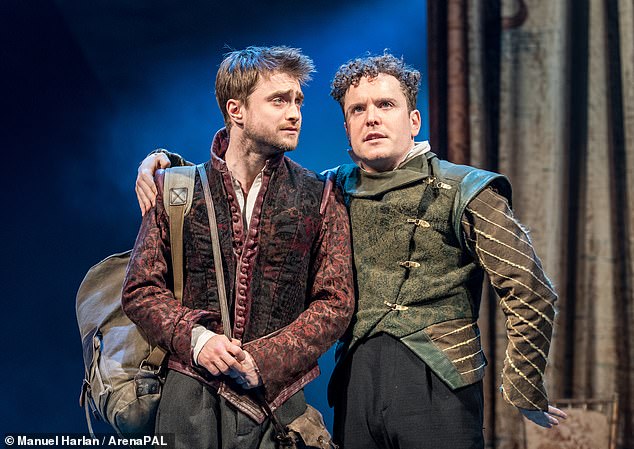 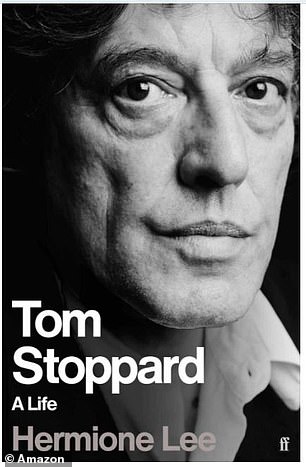 In 2014, Stoppard married Sabrina Guinness, wealthy daughter of the banking branch of the Guinness family, and they live happily in Dorset.

Stoppard was a ruthless editor and shortener of his plays, always willing to shave off 15 minutes here and there to keep the audience from falling asleep or walking out. I slightly wished he’d been given free rein to shave off some pages of this book, especially where Lee provides lengthy synopses of each play, some of which go on for ten or 12 pages.

Stoppard asked her to write the book and fact-checked it, but perhaps didn’t remark on its swollen length. But so compellingly does Lee convey the exuberance and unpredictability of both his plays and his life that I’m now yearning to see a Stoppard play in a theatre again. Leopoldstadt opened on February 12 and closed, as did so much else, on March 14.

‘Life is a gamble at terrible odds. If it was a bet you wouldn’t take it,’ is a line from Rosencrantz And Guildenstern Are Dead. Indeed you wouldn’t. Stoppard’s life could have taken a very different turn in the cataclysms of the 20th century — not only the Holocaust but the brutal Communist crackdowns in Prague in 1968. He has forever been grateful for his astounding luck.

Victoria has recorded no new cases of coronavirus hours before a series of restrictions are slashed...